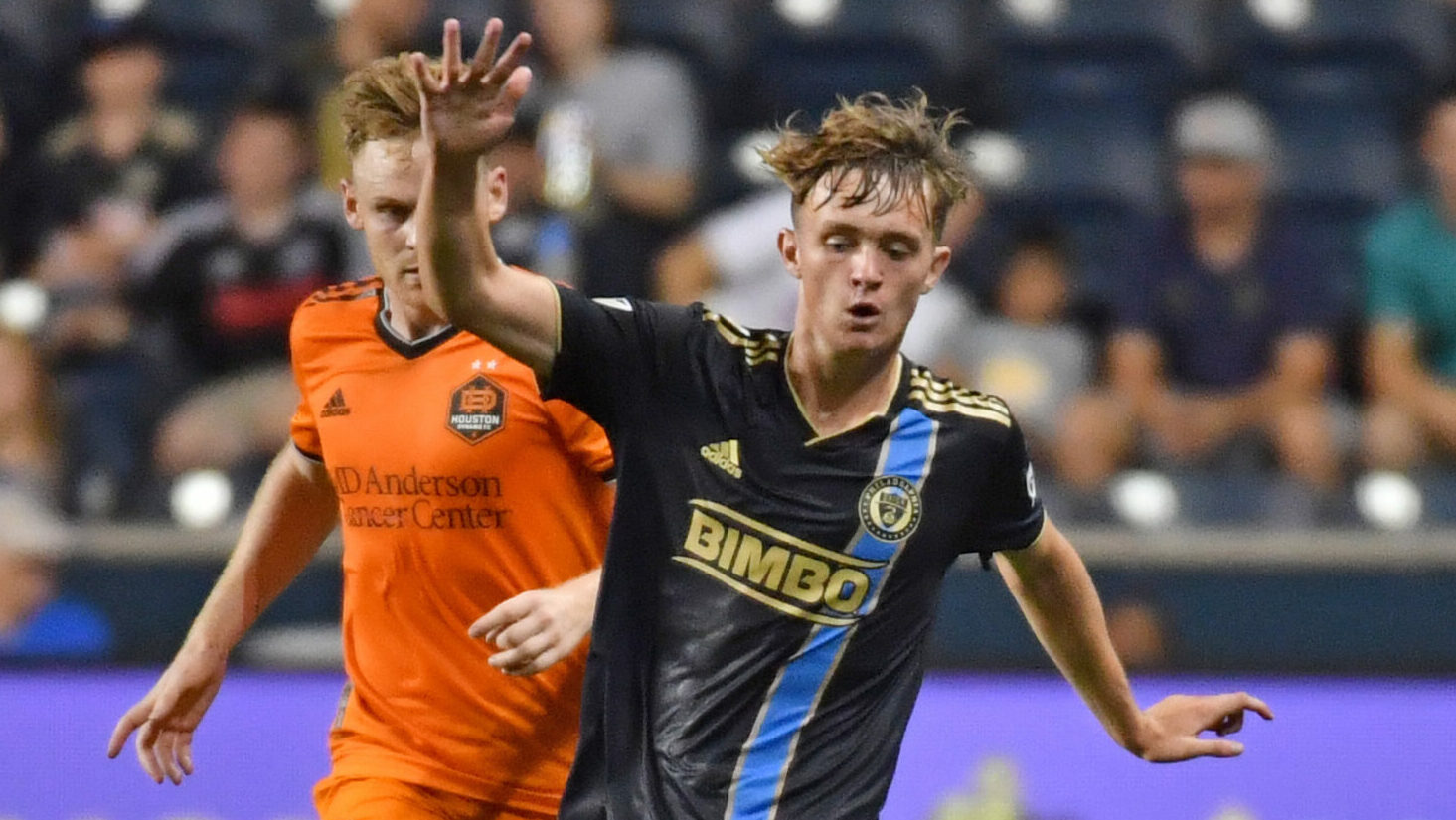 Jack McGlynn helped the U.S. Under-20 men’s national team earn World Cup Qualification earlier this summer and since playing a major part in Mikey Varas’ squad, the Philadelphia Union midfielder has skyrocketed into a key contributor at club level. McGlynn made his third-consecutive start on Saturday night and celebrated his first MLS goal in style as the Union brushed aside the Houston Dynamo 6-0 at Subaru Park. His first-half free kick goal was just the latest glimpse of McGlynn’s sensational left foot, while his technical ability also helped the homegrown midfielder register his first assist of the season. The 19-year-old delivered a strong 90 minutes in Jose Martinez’s absence on Saturday night, showing once again he can contribute for the Eastern Conference leaders. “I’ve talked about how special his left foot is,” Union head coach Jim Curtin said. “You can’t teach that. It’s God-given and it’s a talent that not many people possess. “But for a young kid to step up in that spot…that’s the perfect spot to hit a free kick because it’s in the middle, so now the goalkeeper has to respect both sides,” he added. “You can tell where their wall was set up, where Jack was going to try to go with it, and he hit a perfect free kick.” ICE IN MY VEINS!!!! MCGLYNN'S FIRST EVER @MLS GOAL!!!#DOOP | @ussoccer pic.twitter.com/qiTCKdW1mX— PhilaUnion (@PhilaUnion) July 31, 2022 The Union rolled to a fifth-consecutive league win on Saturday night, but McGlynn’s free kick garnered most of the attention. Michael Nelson replaced veteran starter Steve Clark due to a first-half injury, but watched as McGlynn’s curling left-footed strike nestled into the bottom corner. Leading goalscorer Daniel Gazdag normally takes the free kicks for the Union, but McGlynn was set up perfectly with where the foul was called on the field. He made zero mistake with his attempt, tossing his name into the hat for future opportunities to deliver from free kick chances. “I practice them basically every day after training,” said McGlynn. “All the guys know I’m capable of hitting it, so they gave me the opportunity. Thank God it went in. It’s about time I scored.” Not only did McGlynn celebrate his first MLS goal, but he worked tirelessly in the Union’s 4-4-2 set up, drawing three fouls, winning four duels, and completing 89% of his passes (34/38). McGlynn also capped off his evening by setting up fellow homegrown Quinn Sullivan for the Union’s sixth and final goal of the night, which moved the East leaders to 40 goals scored this season. McGlynn excelled with the USMNT U-20’s this summer alongside club teammates Sullivan and Paxten Aaronson, and that confidence has carried over to club level this summer. Now McGlynn will aim to remain in Curtin’s starting lineup as the Union kick off a five-match August schedule at FC Cincinnati on Aug. 6. MCGLYNNSULLIVAN! THE KID COMBO ON KIDS NIGHT!!!#PHIvHOU | 6-0 | #DOOP pic.twitter.com/bwqyIi1TrZ— PhilaUnion (@PhilaUnion) July 31, 2022 “His composure is special for a kid as young as he is,” Curtin said. “He’s clever enough to get out of a tight spot with that left foot too. You sprint at him, he has a couple outs in his game to get away from pressure. Then if they do lay off him, he’s able to play that ball in behind. So he’s able to hurt you in a lot of different ways.”