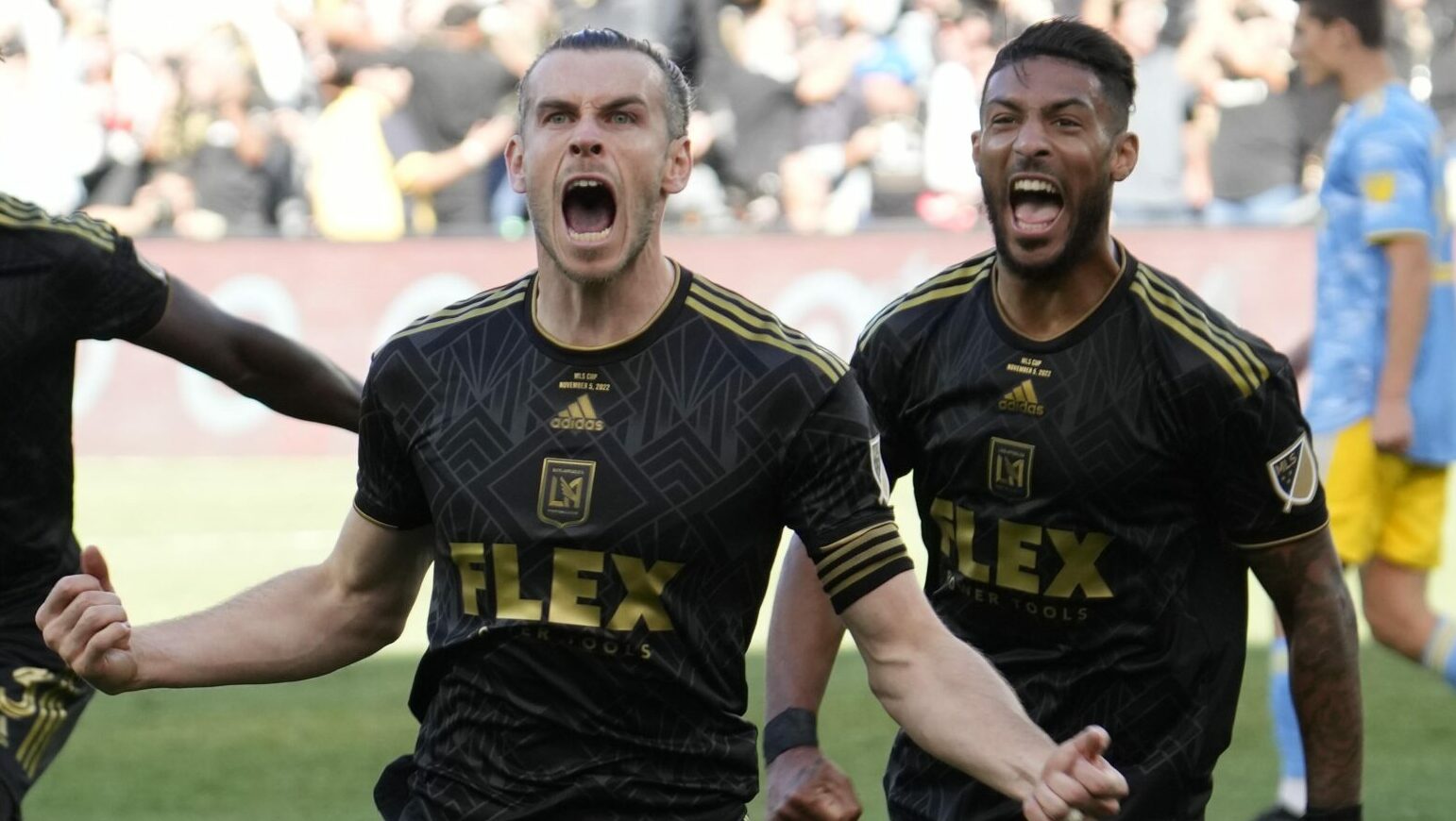 LOS ANGELES — Los Angeles FC didn’t expect to rely on veteran backup goalkeeper John McCarthy in Saturday’s MLS Cup Final, but received a heroic performance from him to lift a first-ever MLS Cup. McCarthy came off the bench and made two saves while LAFC scored three of its attempts as Steve Cherundolo’s squad defeated the Philadelphia Union 3-0 on spot kicks. The teams played out a thrilling 3-3 draw through 120 minutes, which saw LAFC pegged back twice and Gareth Bale’s 128th minute equalizer forcing a shootout. McCarthy came off the bench to replace injured starter Maxime Crepeau and proceeded to deny both Jose Martinez and Kai Wagner. Cristian Tello’s first shot was rejected by Andre Blake, but the Jamaican could not repel Denis Bouanga, Ryan Hollingshead, and Ilie Sanchez from scoring their efforts. LAFC’s first-half pressure led to a breakthrough goal with Kellyn Acosta benefitting off a defection. Acosta’s right-footed free kick deflected off Union midfielder Jack McGlynn and snuck into the bottom-left corner past Andre Blake. It was Acosta’s first-career playoff goal and his 19th overall in league play. WHAT A STUNNERKELLYN ACOSTA STRIKES FIRST FOR @LAFC! pic.twitter.com/TtSjgiqO8U— FOX Soccer (@FOXSoccer) November 5, 2022 LAFC came close to doubling its lead before halftime, once again with its chance coming from a free kick. Although the original effort was blocked by the Union wall, Carlos Vela’s cross towards the back post allowed Diogo Palacios to create a one-time shot towards goal. Andre Blake dove to his left and punched away the left back’s shot, which looked destined to nestle into the right corner of his goal. The Union got themselves back into the match in the 59th minute with Daniel Gazdag tying things up for the Eastern Conference champions. Jose Martinez’s long-range shot turned into a great set-up for Gazdag, allowing the Hungarian to roof a shot past Maxime Crepeau. LAFC thought it snatched a winning goal through Jesus Murillo’s header in the 83rd minute, but the Union fought their way back and tied things up for a second time. ABSOLUTE MAYHEM IN LOS ANGELES!@LAFC ARE BACK IN FRONT pic.twitter.com/MEnp3naSRz— FOX Soccer (@FOXSoccer) November 5, 2022 Jack Elliott’s header on a set piece snuck past Crepeau and into the bottom-left corner. It was Elliott’s third goal of 2022 and his second-career playoff goal. PHILLY TIES IT @PhilaUnion pic.twitter.com/krU61LzAAI— FOX Soccer (@FOXSoccer) November 5, 2022 The arrivals of Gareth Bale and Cristian Tello helped spark LAFC’s attack in extra time and forced a strong save from Blake to keep the teams level at 2-2. Kwadwo Opoku and Tello connected on a 1-2 before the Spanish international’s long-range shot was punched wide by Blake. A scary incident occurred in stoppage time which led to the ejection of LAFC goalkeeper Maxime Crepeau. Jesus Murillo’s poor back pass forced Crepeau to race out of his box and clear the ball, but the Canadian also collided with Union forward Cory Burke. McCarthy, a former third round pick by the Union in 2015, replaced Crepeau and would have a huge say in the final result. Elliott propelled the Union in front in the 124th minute as his rebound finish gave the visitors a 3-2 lead. McCarthy could not deal with Elliott’s tap-in finish after previously denying the veteran center back’s header. However, LAFC would fight its way to the final minute with superstar Gareth Bale rising to the occasion. WHAT A FINISH HOW TO ANSWER BACK: JACK ELLIOTT EDITION! pic.twitter.com/JGOrzrXp8E— FOX Soccer (@FOXSoccer) November 5, 2022 Bale edged in front of the Union backline to head home Diego Palocios’ cross. It was Bale’s first MLS Cup Playoffs goal. BALE TIES IT IN THE 128TH MINUTE @LAFC pic.twitter.com/7jsVKrLUy3— FOX Soccer (@FOXSoccer) November 5, 2022 McCarthy’s fourth-career MLS Cup appearance proved to be a memorable one for the 30-year-old as LAFC lifted the league title for the first time. The result also capped off a domestic double for LAFC, after the California-based club captured Supporters’ Shield earlier this year.