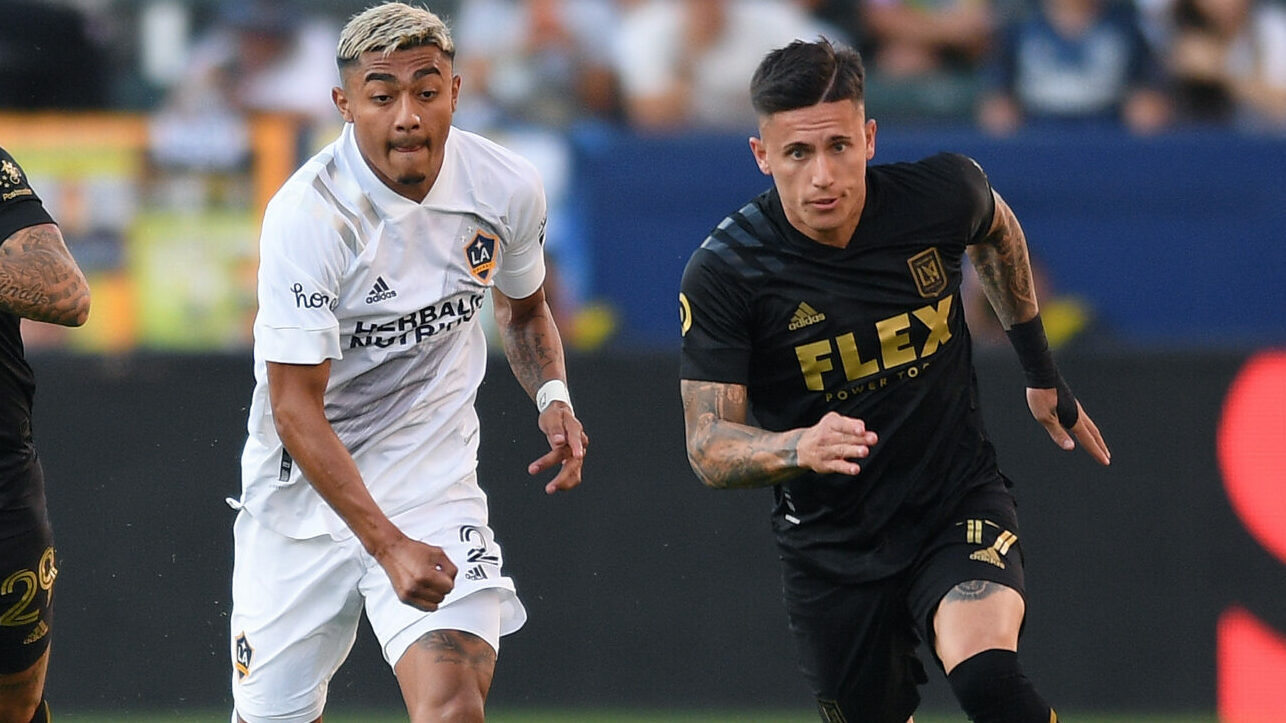 One of the most highly anticipated matches in all of the 2022 season approaches in Week 19 of MLS action, with Supporters’ Shield leaders Los Angeles FC set to welcome new stars Gareth Bale and Giorgio Chiellini in its rivalry match against the LA Galaxy. Several other storied rivalries are renewed this week, too, with the Seattle Sounders hosting the Portland Timbers in a Cascadia Cup match. The Sounders, struggling for consistency in recent weeks, will take on a Timbers side that has caught fire lately with a four-match unbeaten run. Rivalries with strong backgrounds will receive another exciting chapter, with the New England Revolution taking on New York City FC and the Philadelphia Union battling D.C. United. An Eastern Conference semifinal exit from 2021 will be fresh in the Revs’ minds, while the Union look for their third win over D.C. United in the teams’ previous four meetings. Here are the top matches to watch in Week 19. LAFC vs. Galaxy Friday, 10 p.m., ESPN, ESPN Deportes LAFC made some huge news by signing Italian national team defender Giorgio Chiellini and another Welsh winger Gareth Bale. Both stars are set to make their debuts in this match, in which LAFC takes on a Galaxy side that have shown flashes, but remained inconsistent so far in 2022. While LAFC is enjoying red-hot form and leading the Supporters’ Shield standings, the Galaxy have the better of this series in recent meetings, winning three of the last five meetings with the other two being draws. The Galaxy have not lost to LAFC since 2020. Greg Vanney’s team has not been consistent lately, but a 4-0 win over CF Montreal showed that Javier “Chicharito” Hernandez and Dejan Joveljic can coexist, and score, in the starting lineup. The Galaxy also added a midfield reinforcement in Gaston Brugman, but Brugman won’t be available to play this weekend. Sounders vs. Timbers Saturday, 4:30 p.m., FOX, FOX Deportes The Portland Timbers are peaking at just the right time to meet their arch-rivals this weekend. Meanwhile, the Seattle Sounders have taken 10 of a possible 15 points in their last five matches, with Jordan Morris and Cristian Roldan both in outstanding form. Results like a 2-2 draw at Nashville SC and a 3-0 win over the Colorado Rapids show the Timbers are making some improvement after a poor start to 2022. Jaroslaw Niezgoda has emerged as a goalscorer, with six goals this season, and Bill Tuiloma and Claudio Bravo lead a strong back line. The Timbers won the previous matchup 2-0, but will want to further distance themselves from a 6-2 beatdown by the Sounders earlier in the 2021 season. NYCFC vs. Revolution Saturday, 1 p.m., ESPN+ NYCFC hasn’t been the same since losing manager Ronny Deila. The team has yet to win under interim coach Nick Cushing, with a loss and two draws in their last three matches. This home match against the New England Revolution, which pushed NYCFC all the way to a penalty shootout in last year’s playoffs on the defending MLS Cup champs’ path to the title, is the perfect opportunity for Cushing to find some traction. The Revs are on a mission to right the ship, with Gustavo Bou continuing to play adequately at center forward until new DP signing Giacomo Vrioni is ready. Wing threats such as the Revs’ Dylan Borrero and NYCFC’s Santiago Rodriguez will look to provide service and flair. Union vs. D.C. United Friday, 7:30 p.m., ESPN, ESPN Deportes The Union-D.C. United rivalry can be traced all the way back to 2010, when the Union played its first home match against D.C. United. It ended in a memorable 3-2 win for the Union, and a number of contentious chapters continued in the rivalry. At this moment, the Union are looking to keep pace toward the top of the Eastern Conference, while D.C. United looks to Taxi Fountas to continue scoring. D.C. United recently earned a 5-3 win over Orlando City to show the Eastern Conference’s parity. Only eight points separate the bottom two teams, D.C. United and the Chicago Fire, from a playoff spot. Dynamo vs. FC Dallas Saturday, 8:30 p.m., ESPN+ The Dynamo have waited an agonizing few months for the debut of Mexican international Hector Herrera. The 32-year-old midfielder will likely make his debut at BBVA Compass Stadium in an in-state rivalry game against Jesus Ferreira, Paul Arriola and FC Dallas. Paulo Nagamura’s Dynamo team is six points out from a playoff spot in the Western Conference, and the Dynamo’s margin for error has been thin so far, with a -1 goal difference, despite outperforming some peers defensively with 23 goals allowed. The presence of Herrera could fix some things. FC Dallas is looking to get back on track after four matches without a win. Jesus Ferreira is tied for the lead in the Golden Boot race with 10 goals. Dallas needs to shape up defensively after giving up multiple goals in three of its last four games. MLS Week 19 Schedule FRIDAY 7:30 p.m. – Union vs. D.C. United, ESPN, ESPN Deportes 10 p.m. – LA Galaxy vs. LAFC, ESPN, ESPN Deportes 10:30 p.m. – Whitecaps vs. Minnesota United, ESPN+ SATURDAY 1 p.m. – NYCFC vs. Revolution, Univision, TUDN, Twitter 4:30 p.m. – Sounders vs. Timbers, FOX, FOX Deportes 7 p.m. – Atlanta United vs. Austin FC, ESPN+ 7 p.m. – Charlotte FC vs. Nashville SC, ESPN+ 7:30 p.m. – FC Cincinnati vs. Red Bulls, ESPN+ 7:30 p.m. – CF Montreal vs. Sporting KC, ESPN+ 7:30 p.m. – Toronto FC vs. Earthquakes, ESPN+ 8 p.m. – Fire vs. Crew, ESPN+ 8 p.m. – Orlando City vs. Inter Miami, ESPN+ 8:30 p.m. – Dynamo vs. FC Dallas, ESPN+ 10 p.m. – RSL vs. Rapids, ESPN+