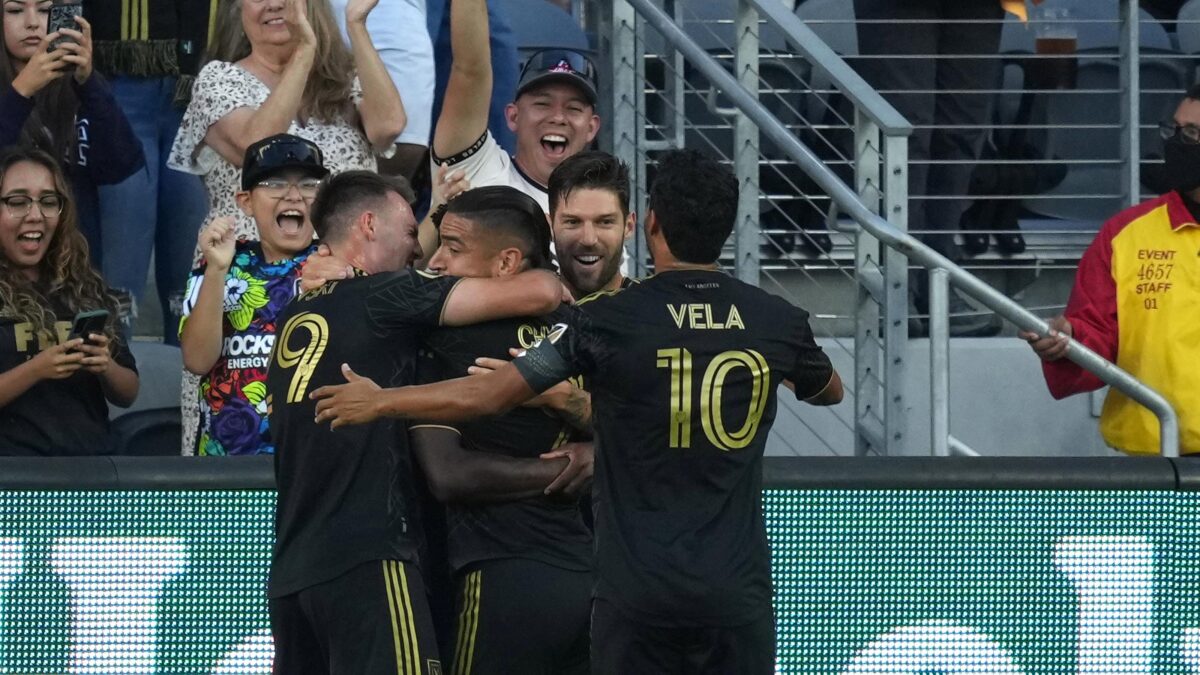 The latest installment of the Galaxy-LAFC rivalry did not disappoint, despite the fact that Gareth Bale was not ready in time to take the field for his LAFC debut. LAFC strengthened its lead atop the Supporters’ Shield standings with a strong overall performance. A late header from Rayan Raveloson helped the Galaxy mount a comeback attempt, but it was Jose Cifuentes and Cristian Arango who carried LAFC to another home win. On the East coast, the Philadelphia Union raised many eyebrows with a gaudy scoreline in a win over D.C. United. Julian Carranza scored a hat trick and Alejandro Bedoya and Mikael Uhre each scored twice as the Union put seven goals past Chad Ashton’s side. A fantastic late goal from Luis Amarilla means Minnesota United has strung together three wins. The Loons proved dominant over the Vancouver Whitecaps at BC Place in Friday’s final match. Here are the results from Friday’s MLS action. Union 7, D.C. United 0 (Alejandro Bedoya 9′, 37′, Julian Carranza 22′, 25′, 72′, Mikael Uhre 45+2′, 59′) Mitchell Leff-USA TODAY Sports Man of the Match: Julian Carranza’s first MLS hat trick helped spark a dominant home win for the Union. Carranza missed a penalty in the 70th minute, but made good on his mission to complete the hat trick with a clean finish just two minutes later. Moment of the Match: Alejandro Bedoya’s opening goal set the tone for a frantic first half at Subaru Park. Match to Forget: The entire backline struggled for D.C. United but nobody struggled more than Donovan Pines in his 45 minutes on the pitch. Pines was switched for Nigel Robertha at halftime after an ineffective showing. LAFC 3, LA Galaxy 2 (Jose Cifuentes 17′, 70′, Cristian Arango 72′) – (Samuel Grandsir 55′, Rayan Raveloson 81′) Kirby Lee-USA TODAY Sports Man of the match: Jose Cifuentes scored the opener for LAFC in the 17th minute with a free header off a corner kick and used his head for another goal off an in-swinging cross from Carlos Vela to give LAFC a 2-1 lead. The 23-year-old midfielder also had seven successful tackles and 10 duels won. Moment of the Match: Shortly after Cifuentes scored his brace, Cristian Arango added a third, beating Galaxy goalkeeper Jonathan Bond and scoring the eventual match-winner for the Black and Gold. Match to Forget: Raheem Edwards. One of the first players to play for both sides of El Traffico, Edwards endured a tough night at left-back, struggling to deal with Carlos Vela and offering little going forward. Whitecaps 1, Loons 3 (Lucas Cavallini 66′) – (Kemar Lawrence 71′, Luis Amarilla 84′, Franco Fragapane 88′) Anne-Marie Sorvin-USA TODAY Sports Man of the Match: Franco Fragapane stayed dangerous on the wing all night for the Loons, with three key passes. His persistence paid off in the 88th minute with a goal to seal the win. Moment of the Match: This match seemed bound for a stalemate, until Luis Amarilla uncorked a long-range shot that hit the back of the net in the 84th minute. Match to Forget: Cristian Dajome failed to mark Kemar Lawrence at the back post on a corner kick, leading Lawrence to score the equalizing goal in the 71st minute.