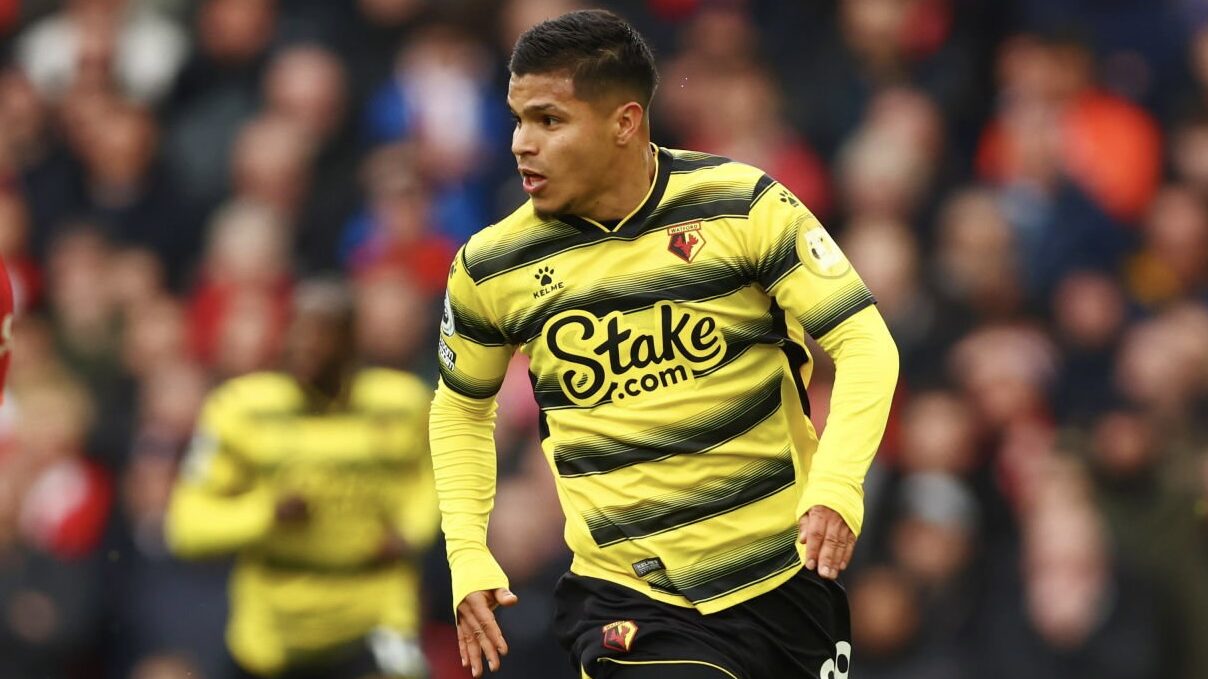 The Columbus Crew have needed attacking help during the 2022 MLS season and looked to have filled that void Tuesday. Watford striker Cucho Hernandez has joined the Crew on a permanent transfer from the EFL Championship side, the clubs announced. The 23-year-old Colombian is a record-signing for the Crew, joining for a reported fee of $10 million. “Cucho is a world-class player who is still at an early stage of his career, and we could not be more excited to welcome him to the Columbus Crew,” club president and general manager Tim Bezbatchenko said in a release. Hernandez showed promising moments with Watford during the 2021-22 English Premier League campaign, scoring five goals and adding two assists. Watford was relegated back to the EFL Championship, forcing Hernandez to look for other options to continue playing regularly. He has also played for Spanish clubs Huesca, Mallorca, and Getafe during loan spells from Watford. The Crew traded MLS veteran Gyasi Zardes to the Colorado Rapids earlier this season and currently are three points out of the final playoff spot in the Eastern Conference. Here is a closer look at all of the recent MLS News: Atlanta United adds Mexican goalkeeper Gudino Atlanta United looks to have found its answer at goalkeeper, signing free agent Raúl Gudiño through the end of the 2022 MLS season. Gudino, 26, was a free agent before signing a contract with the Five Stripes, which also includes an option for 2023. He arrives in Gonzalo Pineda’s squad, replacing veteran Brad Guzan, who suffered a torn Achilles earlier this season. Gudino totaled 85 appearances for Chivas de Guadalajara in Liga MX, while also playing for CF Uniao Madeira, and FC Porto B in the past. He’s earned five caps to date with the Mexican national team. Gudino will be available to play for the Five Stripes when the MLS Summer Transfer Window opens on July 7. He will compete with Bobby Shuttlesworth and Rocco Rico Novo for the starting job between the posts. Five Stripes sign defender Purata on loan Atlanta United also added defensive depth on Tuesday, signing Mexican defender Juan José Purata on loan from Tigres UANL for the remainder of the 2022 season. Purata’s deal also includes an option to extend the loan for 2023 and a purchase option. He will occupy an international roster spot in Gonzalo Pineda’s squad. “Juan is a talented center back with an extremely high ceiling,” Vice President and Technical Director Carlos Bocanegra said. “Given our current situation, we felt the need to bring in another central defender. An opportunity arose to acquire him on loan, and we’re pleased to be able to bring him into the group. Once integrated and registered, we’re looking forward to having him compete immediately.”  The 24-year-old has spent his entire professional career with Tigres UANL, working his way up from the academy. Purata has made 34 appearances in his career since debuting for Tigres’ first team in 2017. He was part of the Tigres squad that won the 2018 Campeones Cup, 2019 Liga MX Clausura and the 2020 Scotiabank Concacaf Champions League. Atlanta United remains without star defender Miles Robinson due to a torn Achilles. Quick Kicks: In preparation for the 2026 World Cup, Toronto FC has announced that BMO field will undergo an expansion project, adding 17,756 seats and bringing the total capacity to 45,736.