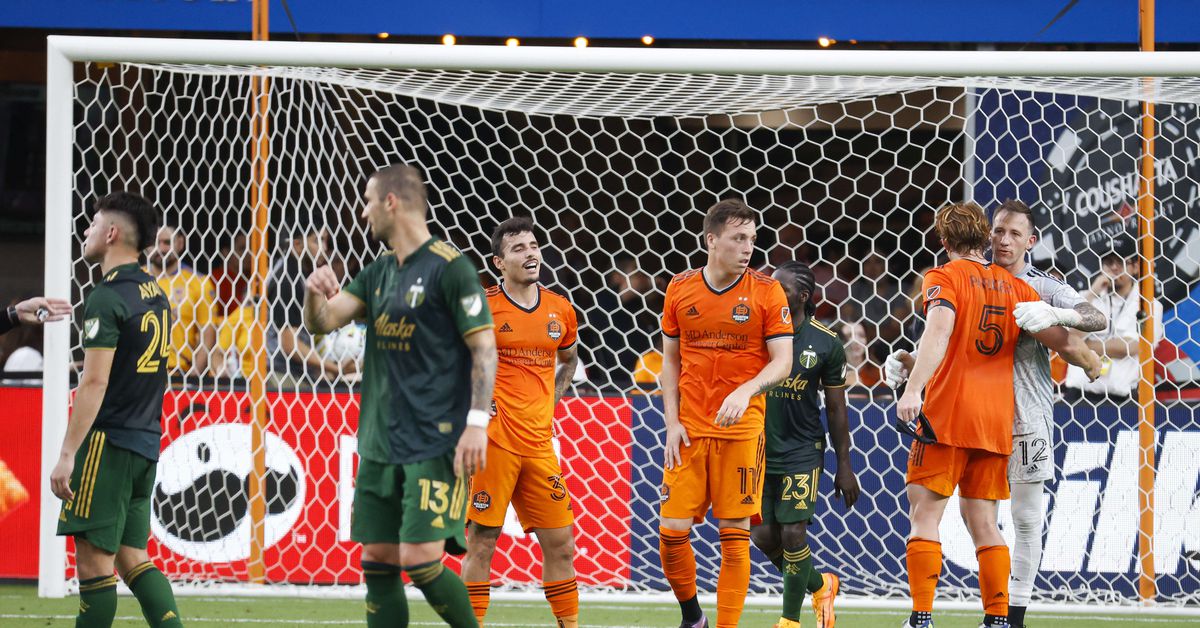 Troy Taormina-USA TODAY Sports There were no goals but the ratings don’t stop. It’s time to take a look at our player ratings from Saturday’s 0-0 draw with Portland. After each game we’ll be handing out player ratings on a 1-10 scale. The Houston Dynamo kept their unbeaten streak with a 0-0 draw against the Portland Timbers on Saturday night. Let’s have a look at the ratings as the Dynamo picked up the three points at home. All stats referenced are from fbref. Starters Steve Clark – 7 Keeping a clean sheet against your former team has to feel good. Clark made saves on both of Portland’s shots on goal but only managed to complete 65% of his passes. That is now two weeks in a row where Clark was uncharacteristically low in his passing. Adam Lundkvist – 7 Lundy has been a constant for the Dynamo early in this season. From the defensive work to his ability to get forward, Lundkvist has done well. Paulo Nagamura commented after the match that Lundy didn’t get forward as much this game based on tactics and how the game went. Teenage Hadebe – 5 Say what you want about the foul but Hadebe got sent off in the second half for a challenge that will now see him suspended for this weekend’s Texas Derby. Teenage had 9 clearances and completed all 50 of his passes before having to hit the showers early after 74 minutes. Tim Parker - 7 The captain returned to the starting lineup and didn’t seem to miss a beat after missing a couple of games. Parker had 6 clearances and 2 tackles to go along with completing 93 of his passes. Griffin Dorsey – 6 Saturday was another typical Dorsey performance. Get involved in the attack, track back defensively to break up some attacks, rinse and repeat. Dorsey hasn’t played poorly but you have to start wondering if Zeca can bring something else to the team if given the chance to start. Matias Vera – 7 Vera wasn’t involved in a lot of defensive plays but his ability to link the team together from back line to attack is so underrated. Vera had 5 progressive carries as he continues to get more involved offensively. Adalberto Carrasquilla – 7 Coco had a whopping 11 progressive carries Saturday. The midfield, and the Dynamo as a whole, are a completely different team when Carrasquilla is in the lineup. As his contract winds down the cries are going to get later. #SignCoco Darwin Quintero – 8 Troy Taormina-USA TODAY Sports All the offense with no goals to show. Quintero has 0.6 xG, 0.6 xA, 7 shot-creating actions, and 4 succesful dribbles. When Darwin is doing Darwin things, you hate to waste that kind of performance. Quintero came off for defender Ethan Bartlow after Teenage Hadebe’s red card. Fafa Picault – 5 Some weeks you score a brace, some weeks you miss a couple of big chances. Such is the life of a striker/winger. Fafa had a couple of golden chances, including a breakaway in the first half that he shot right at Portland goalkeeper Aljaz Ivacic. On a different day Picault is wheeling away to celebrate but it didn’t go his way this week. Tyler Pasher – 5 Pasher came off after an uneventful hour on the pitch. The Canadian had no shots and no shot-creating actions. On to the next one. Sebastian Ferreira – 5 Hot and cold. That’s what strikers do. After a two goal perofmance against San Jose, Sebas struggled to find the game against Portland. Bill Tuiloma and Larrys Mabiala are big, physical centerbacks and they never let Ferreira get comfortable. Subs Corey Baird - 6 Tyler Pasher had a subpar performance Saturday and was pulled for Baird for the final half hour. Baird put in a typical strong effort defensively with 8 pressures, 2 tackles, and an interception. Zeca – 6 Watching Zeca play, you can see the talent and ability. Paulo Nagamura is going to unleash him at some point for a full match. That match may be tomorrow in the Lamar Hunt US Open Cup against Rio Grande Valley FC. Thor Ulfarsson – 6 Thor had a couple shots but he is another player that could do with some more extended minutes, for his confidence and form and to get him going in his rookie season. It’s probably very likely we get to see those minutes tomorrow night. Memo Rodriguez - 6 Memo came on for the final 12 minutes and helped the team possess the ball and move it around. He didn’t really have any flashy moments but he was steady. Ethan Bartlow - 5 Coming on as a center back, after another center back was sent off, you would think Bartlow would have been very involved in the game. Surprising, Bartlow didn’t have much to do in his cameo to help see out the one point.