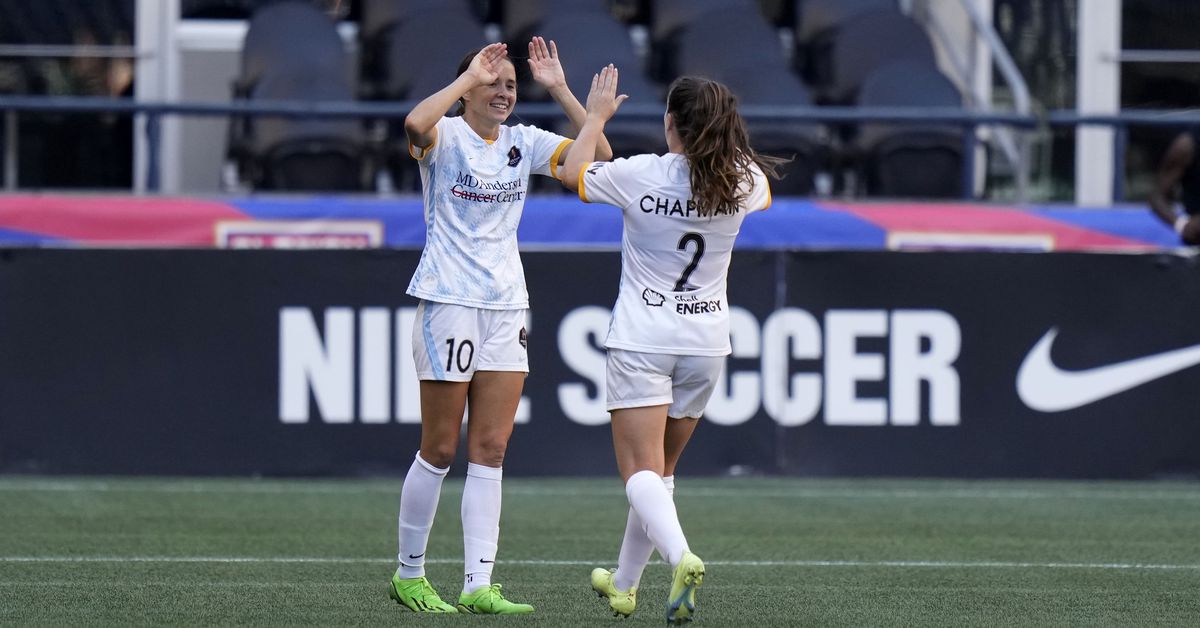 Ebony Salmon scored twice to give the Dash a 2-1 win over OL Reign.

The Houston Dash traveled to the Pacific Northwest for a meeting with OL Reign Sunday evening. Ebony Salmon stayed hot, scoring twice, to give the Dash their first ever win in Washington, beating Reign 2-1.

USWNT star Megan Rapinoe put OL Reign in front after 16 minutes. Rapinoe received a pass from Kim Little, playing in her final NWSL match, on the left side of the field. She took into the Houston box and then unleashed a left-footed volley that beat Jane Campbell at her far post. It was Rapinoe’s first goal of the season, and an unfortunate reminder of just how skilled she is.

.@mPinoe nets her first of the year and it's a beaut!@OLReign | #BoldTogetherpic.twitter.com/NlZIPepLhZ

The Dash struggled with the press throughout the first half and OL Reign looked lively, led by Rapinoe. Reign ended with 6 shots in the first half, with 3 on target, to just 1 for Houston, that was not on target.

Houston came out with much more direct play and attack, and then the reigning NWSL Player of the Month took over. Ebony Salmon stepped to the spot after a handball in the box by OL Reign. Salmon placed the penalty perfectly into the bottom left corner, past the outstretched arms of goalkeeper Phallon Tullis-Joyce, to pull the Dash level in the 53rd minute.

Just two minutes later, Salmon gave Houston the lead. The English striker continued her scintillating form. Salmon collected a through ball from Shea Groom into the right channel of the box and made no mistake with her first touch, firing past Tullis-Joyce.

The Dash hung on to their lead as the second half played on, even as OL Reign brought on more firepower in Nikkie Stanton, Tobin Heath, and Ally Watt. In the 79th minute, Houston goalkeeper Jane Campbell stepped up big to preserve the lead. Rapinoe led a break for OL Reign and the ball found its way to former Dash player Sofia Huerta on the right side of the box. Huerta let fly with a shot destined for the far post but Campbell got her right foot out to make a huge kick save.

OL Reign had a golden chance to equalize in stoppage time when the substitute Watt raced past the Houston defense. Watt got into the box away from Katie Naughton, but her touch let her down and Campbell was able to come out and claim the ball to end the threat.

The win for Houston moves the Dash into third place, alone, and just two points behind first place San Diego and Portland. Next up for the Dash will be a return home for a match up with Racing Louisville on Friday, August 12.