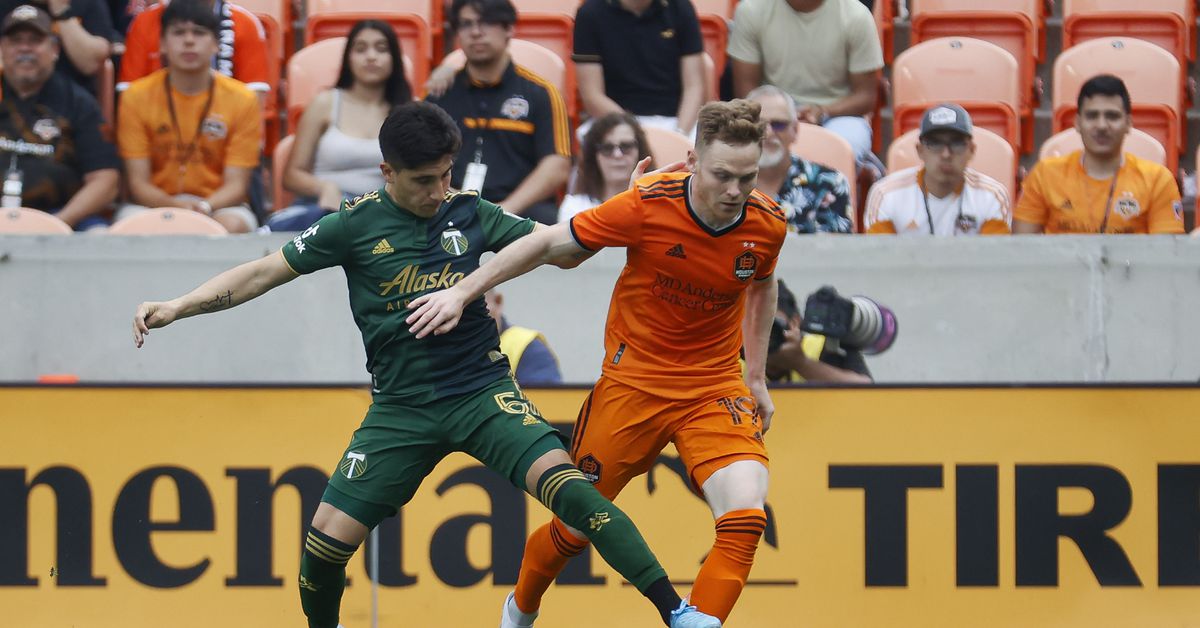 Troy Taormina-USA TODAY Sports Despite having the better chances, the Dynamo would draw the Portland Timbers 0-0 at PNC Stadium.  Houston Dynamo FC hoped to keep their unbeaten run going following a thrilling 4-3 win over the visiting San Jose Earthquakes. This week the Dynamo were visited by a more difficult opponent in the Portland Timbers. They were able to keep the unbeaten run alive, but unable to get the three points in the 0-0 draw. The early minutes showed the Dynamo space themselves very well which allowed their ability to possess in the midfield and take possession to quickly look to counter. The Timbers defended well and often looked to slow the game to pick their moments a little more carefully. It would be the home side in Houston coming up with an incredibly close chance early. A poorly squared pass along the Portland back line set up Darwin Quintero which should’ve led to the game’s opening goal. He faked his defender and a good look at goal but the attempt wasn’t good and was saved by Timbers’ goalkeeper Aljaž Ivačič. As the first half continued, the Dynamo again had another golden opportunity to go up a goal this time before the 20th minute. Quintero played a perfect ball from midfield to Fafà Picault to put him essentially 1v1 with the Timbers’ keeper. Picault took his touches and tried to play it under Ivačič, but it was expertly saved to keep the game level at 0-0. Well done Jazzy. #RCTID pic.twitter.com/WSYuzOxbdo— Portland Timbers (@TimbersFC) April 16, 2022 As play continued the Dynamo were by far the more threatening side to score, but were unable to take advantage of their chances. Houston looked organized and countered well any time Portland seized possession. The Timbers often played overly physical as they dominated the early foul calls in the first half. Portland had a good opportunity to steal a goal around the 38th minute following a set piece opportunity. Tim Parker did well to read the play and tried to clear the ball towards Sebastián Ferreira. Ferreira flicked the ball hoping to start the counter attack, but it went to Cristhian Paredes who took a shot that was saved by Houston goalkeeper Steve Clark. At halftime the two sides would go into the locker rooms locked at 0-0. Houston started the game better and utilized excellent spacing to help them win possession in good areas to create chances which they were unfortunate to not capitalize on. Portland slowly played their way back into the game as they went from a deeper block to a more possession based style. This worked to their advantage as Houston took more risks which was one reason towards the end of the half Portland were the stronger side. The Dynamo opened the second half with a lot of energy as Portland appeared to sit a little deeper to begin things. Tyler Pasher hoped to win a penalty as he was pushed lightly by Claudio Bravo in the penalty box, but the center official said play on. Houston came close again to opening the scoring following a set piece drawn by Picault. Darwin Quintero delivered a perfectly placed cross to Picault who headed the ball down to the back corner, but Timbers’ keeper Aljaž Ivačič made a full stretch save that ended up going off the post. What. A. Save. #RCTID pic.twitter.com/2HCnwapnYw— Portland Timbers (@TimbersFC) April 16, 2022 Things would be more difficult for the Dynamo as Teenage Hadebe would get sent off for a second yellow offense following a long ball over the top. It was a foul, but given the referee’s “play on” style for the majority of the game, it seemed out of character and would back the Dynamo into a corner playing down a man. With the Dynamo down a player, they had to make changes to adjust their formation and Portland began to increase their possession in Houston’s half of the field as they created more chances. The Dynamo did well to defend and pick their chances including with some quality possession of their own to try and see the game out with the disadvantage. The Timbers really pushed for the game winner in stoppage time as they pinged the ball around the Dynamo 18 yard box with a pair of chances, but to no luck. The game would end 0-0. Houston began both halves the stronger side and the Timbers ended both better. The Dynamo had the better chances which they’ll absolutely want back, but the Timbers stayed in it and had their own opportunities. The Dynamo have a short turnaround as they’ll face their former USL affiliate the Rio Grande Valley FC Toros with former Dynamo Head Coach Wilmer Cabrera on Tuesday April 19th at 7:30 PM CT in Houston. Their next league play fixture will be that weekend on Saturday for an afternoon derby match against FC Dallas on the road in Frisco at 2:00 PM CT on April 23rd. Goals: None Disciplinary: 16’ POR: Cristhian Paredes (yellow card) 27’ HOU: Teenage Hadebe (yellow card) 27’ POR: Sebastián Blanco (yellow card) 75’ HOU: Teenage Hadebe (second yellow card, red card) 81’ POR: Bill Tuiloma (yellow card) Lineups: Houston Dynamo (4-3-3): Steve Clark; Adam Lundkvist, Teenage Hadebe, Tim Parker, Griffin Dorsey (59’ Zeca); Adalberto Carrasquilla, Matías Vera (78’ Memo Rodríguez), Darwin Quintero (78’ Ethan Bartlow); Fafà Picault, Sebastián Ferreira (67’ Thorleifur Úlfarsson), Tyler Pasher (59’ Corey Baird) Portland Timbers (4-4-1-1): Aljaž Ivačič; Claudio Bravo, Bill Tuiloma, Larrys Mabiala, Josecarlos Van Rankin (83’ Dario Župarić); Santiago Moreno (71’ Marvin Loría), Diego Chará, Cristhian Paredes (62’ David Ayala), Yimmi Chará; Sebastián Blanco (82’ Eryk Williamson); Jaroslaw Niezgoda (62’ Dairon Asprilla)