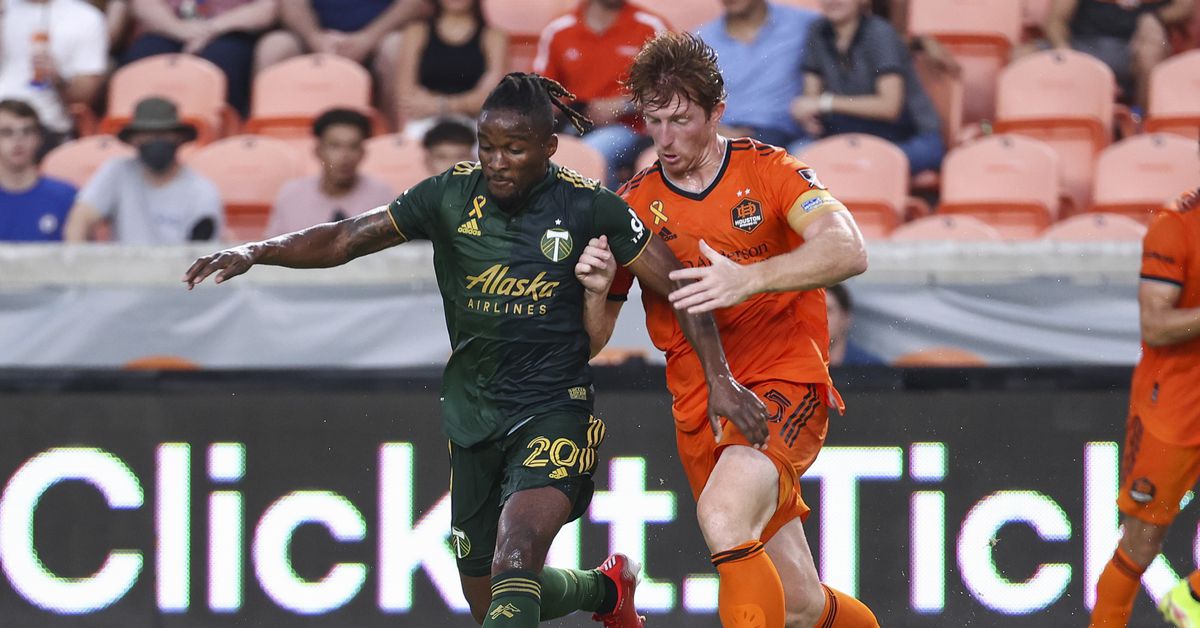 Troy Taormina-USA TODAY Sports Despite two very different halves, the Portland Timbers were able to blank the Houston Dynamo 2-0 at BBVA Stadium.  The winless streak has grown to 16. The Houston Dynamo hoped to snap a 15 game winless streak going back to May 22nd but they were unable to do it at home with the Portland Timbers coming to BBVA Stadium. Portland was dominant in the first half and even though the Dynamo played much better in the second, the final score would read 2-0 to the Timbers. Early into the game, the Timbers utilized a high press combined with accurate passing which pinned the Dynamo deep into their own half. Poor passing in the midfield by Houston led to Portland quickly transitioning the ball back into Houston’s half of the field. Even though the Dynamo back line was up to the task, they often had to make clearances rather than passing the ball to teammates higher up the field which gave the ball right back to the visitors. The Dynamo were nearly in on goal in the 11th minute following some excellent pressing by Maxi Urruti and Tyler Pasher. Urruti pressured the Timbers goalkeeper Steve Clark who had to hastily clear the ball, but Pasher was there to win the ball back. Unfortunately the two couldn’t control their possession, but it would deflect out for a Dynamo throw in. Portland responded by trying to get their own chance on goal, but Teenage Hadebe was able to make a huge tackle to stop the shot. However, Portland would get the game’s opening goal in the 15th minute. A ball was whipped across goal by Sebastián Blanco towards the head of Felipe Mora. Mora headed the ball down which forced a huge save by Dynamo goalkeeper Michael Nelson. However, the save was deflected towards Yimmi Chará who was able to poke the ball into the net. Cleaning up in the box. #RCTID pic.twitter.com/WZ0m4GHRju— Portland Timbers (@TimbersFC) September 4, 2021 Things would get worse for the home side as Nelson appeared to bring down Mora in the box. The play on the field was no penalty, but after a brief check with VAR, the center official pointed to the spot. Mora starred down Nelson and sent him the wrong way to make it 2-0 to the visiting Timbers. Felipe Mora gets his 9th goal of the season. #RCTID pic.twitter.com/Q7YJusZLwi— Portland Timbers (@TimbersFC) September 4, 2021 The Timbers managed the rest of the half well as they forced the Dynamo to chase the game with their possession while choosing moments when to press high to keep the Dynamo numbers back. When Houston did attack, it was usually on the counter and wasn’t creating many opportunities. The Dynamo started the second half better than they did the first as they pushed numbers well and increased their possession inside Portland’s half of the field. Unfortunately Tyler Pasher, who injured his leg before halftime, would be forced to sub out early into the second. Urruti did well to earn a free kick in a dangerous spot in the 51st minute. Memo Rodríguez curled a low ball towards the lower 90, but Clark was able to make the save. In the 67th minute the Dynamo nearly closed the lead the Timbers had. The Dynamo worked the ball well from the wing to Darwin Quintero. Quintero threaded a ball to Maxi Urruti who opened himself up and tried to put the ball in the net, but he pulled it just wide. The Timbers nearly added to their tally in the 78th minute. Zarek Valentin gambled on trying to cut out a pass and missed which put the Timbers on the counter attack. Blanco got free on the wing and played a ball to Mora. Even though Mora had a teammate unmarked behind him, he opted to take the effort himself which went wide. Houston came close again to closing the gap a few minutes later with Joe Corona playing a great ball into Sam Junqua. Junqua rose up and headed the ball forcing a tough save by Steve Clark. Big time Steve Clark. #RCTID pic.twitter.com/hDZkdXfSAu— Portland Timbers (@TimbersFC) September 4, 2021 The final whistle would blow and Portland would get the full three points in the 2-0 loss. The first half saw Portland completely in control of the possession and chances as they started aggressive and tactically played very sound. Houston did well to push numbers up the field and create their share of opportunities in the second half, but they lacked that final pass or touch to get the ball in the back of the net which has been one of the themes of the season. Next up for the Dynamo is a visit from Austin FC at BBVA Stadium on Saturday, September 11th at 7:30 PM CT. Goals: 15’ POR: Yimmi Chará 20’ POR: Felipe Mora (penalty) Disciplinary: 50’ HOU: Tim Parker (yellow card) 51’ POR: Sebastián Blanco (yellow card) 86’ POR: Renzo Zambrano (yellow card) 90’+2’ POR: Larrys Mabiala (yellow card) Lineups: Houston Dynamo (4-3-3): Michael Nelson; Adam Lundkvist (75’ Mateo Bajamich), Teenage Hadebe, Tim Parker, Zarek Valentin; Memo Rodríguez (79’ Joe Corona), Derrick Jones (HT Griffin Dorsey), Matías Vera; Tyler Pasher (49’ Darwin Quintero), Maxi Urruti, Fafà Picault (79’ Sam Junqua) Portland Timbers (4-2-3-1): Steve Clark; Claudio Bravo, Dario Župarić, Larrys Mabiala, Pablo Bonilla (69’ Bill Tuiloma); Diego Chará, George Fochive (69’ George Fochive); Dairon Asprilla (63’ Marvin Loría), Sebastián Blanco (83’ Diego Valeri), Yimmi Chará (83’ Santiago Moreno); Felipe Mora