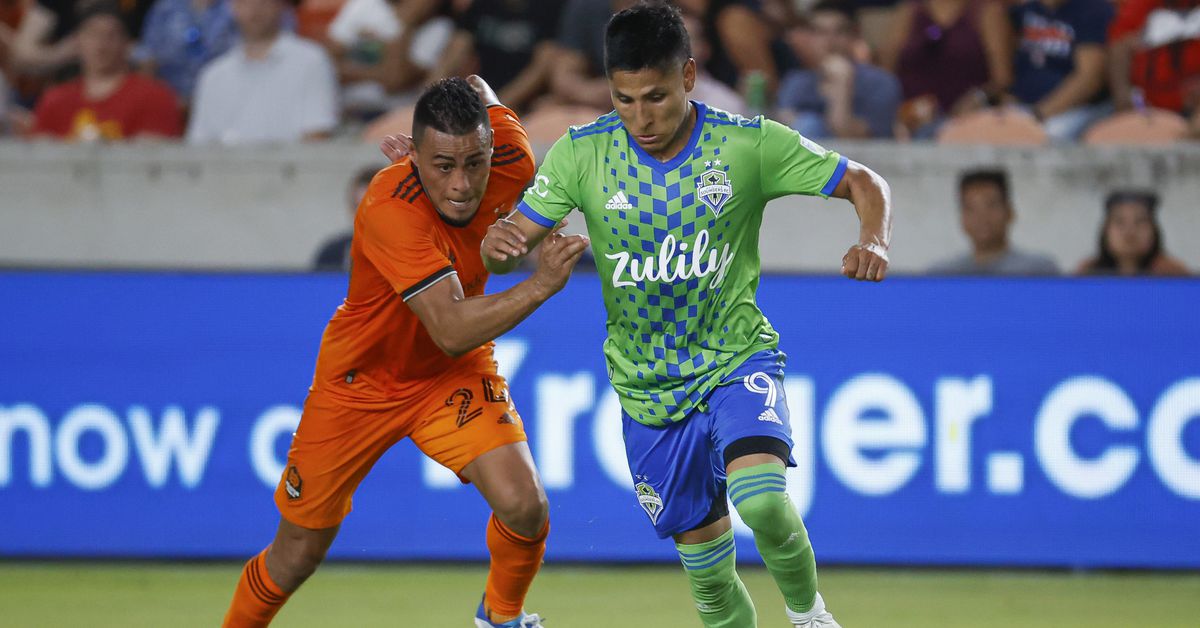 Troy Taormina-USA TODAY Sports The Dynamo put up a good fight against the Champions League winners, but couldn’t come back from a first half deficit Houston Dynamo FC were looking to follow up a win over Nashville SC when they took on the Seattle Sounders at PNC Stadium. Houston had struggled in league play prior to their win over Nashville and hoped to bounce back against the CONCACAF Champions League winners. Despite a pretty solid outing, a first half goal was enough for the visitors to get the win in an entertaining, but disappointing 1-0 loss to the Sounders. The opening minutes were played quickly through the midfield to the forwards by both teams. Nicolás Lodeiro had a good dipping shot saved by Dynamo goalkeeper Steve Clark. Houston had a great opportunity on the counter attack with Sebastián Ferreira holding things up and unleashing Darwin Quintero. Quintero somehow, after being well defended, put Fafà Picault in on goal. Sebas wanted the ball back, but the shot would fly wide. The Sounders appeared to be in control of much of the possession in the early portion of the game, but Houston looked the more dangerous side on the counter with a few quality opportunities to get the opening goal as they tried to catch Seattle with numbers up the field. Some great combination play put Memo Rodríguez out wide on the left wing before he put the ball inside for Quintero to have a long distanced effort, but it was just too high to be on frame. The Dynamo had another close opportunity to get the scoring started in the 23rd minute. Zeca was free on the right wing and cut the ball back to Quintero. Quintero played a 1-2 pass with Sebas, but Quintero’s shot was poor and straight to Sounders’ goalkeeper Stefan Frei. Despite looking arguably the more threatening side, Seattle was relentless and never looked like they were out of it as they continued to control possession and create chances. This eventually led to the opening goal with Lodeiro flicking the ball onto Jordan Morris. Morris played the ball across goal for Alex Roldan who played it back across goal to Raúl Ruidíaz who somehow got in front of his man and deflected the ball into the net. 1-0 Sounders. That's how we get it started @RaulRuidiazM scores his second goal of the @MLS season! pic.twitter.com/snOcI3oE8w— Seattle Sounders FC (@SoundersFC) May 19, 2022 Following the opening goal, Seattle leaned into their possession style and forced Houston to come out of their comfort zone by committing numbers up the field. The Sounders were content at making the Dynamo chase often and the visitors looked composed defensively with the lead. Houston had a quality chance to level the game up at PNC Stadium in the 40th minute with some quick combination play that saw Sebas Ferreira holding the ball up and leaving it for Memo. Memo was quick to it coming from deep and fired a shot that was threatening, but was just off target. Early into the second half there was quicker pace from both sides. Seattle tried to push up the field to force Houston to play quickly and accurately out of the back while the Dynamo also tried to get up the field to create an equalizer. Things would get worse for the Dynamo who looked like they had been threatening for an equalizer but Coco Carrasquilla would get sent off in just the 54th minute. As the Sounders regained possession they looked to unleash Lodeiro, but Coco slightly tugged the arm of Lodeiro which brought him down. Center official Rubiel Vazquez booked the midfielder with his second yellow and he was sent off to give the visitors a man advantage on the field. Following the man down the Dynamo didn’t let up and increased their possession with Seattle content on sitting deeper on their lead. Houston moved the ball well, but Seattle still found room to counter attack. Seattle found some trouble ahead of the 82nd minute after Alex Roldan received his second yellow of the game to put both teams level at 10 men a piece. Despite the teams being level again with the number of players and Houston really pressing for an equalizer Seattle would see the game out. It was a strong effort by the Dynamo against a very talented Sounders side. The Sounders did well to manage the game effectively. They started the game by possessing and picking their chances which led to an opening goal. Houston countered well, but they couldn’t take advantage of their own opportunities and down the stretch Seattle got compact, even with a man advantage, and made it tough for the Dynamo to get themselves back in the game. The Houston Dynamo will be back on the road this weekend when they take on the LA Galaxy on Sunday, May 22nd at 7:00 PM CT. Goals: 28’ SEA: Raúl Ruidíaz (assisted by Alex Roldan) Disciplinary: 11’ HOU: Adalberto “Coco” Carrasquilla (yellow card) 47’ SEA: Kelyn Rowe (yellow card) 54’ HOU: Adalberto “Coco” Carrasquilla (second yellow card/red card) 79’ SEA: Alex Roldan (yellow card) 82’ SEA: Alex Roldan (second yellow card/red card) Lineups: Houston Dynamo: All in for H-Town.#HoldItDown pic.twitter.com/80NBaA4a4s— Houston Dynamo FC (@HoustonDynamo) May 18, 2022 62’ Beto Avila on, Darwin Quintero off 62’ Tyler Pasher on, Fafà Picault off 72’ Thor Úlfarsson on, Sebastián Ferreira off 90’+1’ Thiago on, Memo Rodríguez off Seattle Sounders: Tonight's @Delta Starting XI! https://t.co/h8tiYN4qIN | #HOUvSEA pic.twitter.com/3LnfYVKSnJ— Seattle Sounders FC (@SoundersFC) May 18, 2022 59’ Josh Atencio on, Keyln Rowe off 77’ Jimmy Medranda on, Jordan Morris off 86’ Ethan Dobbelaere on, Albert Rusnák off 86’ Will Bruin on, Raúl Ruidíaz off