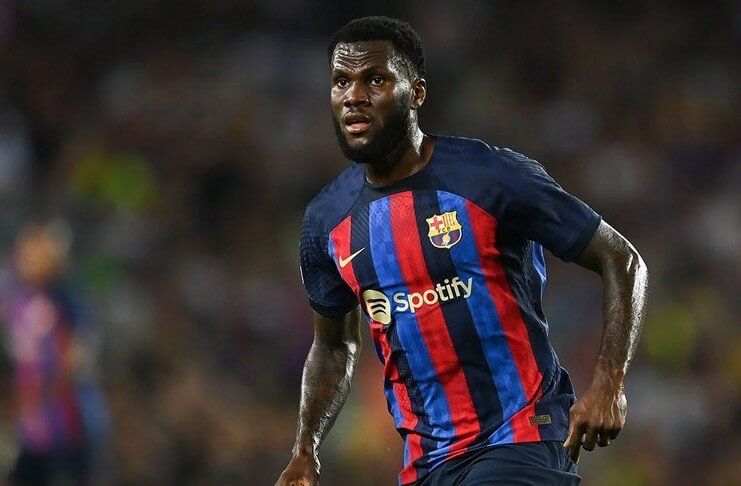 Barcelona are just as likely to sell this January as they are to bring anyone in, knowing that their ability to fit new players into the salary limit is, at best, limited.Two candidates for an exit have stood out most. Memphis Depay seems almost certain to leave Barcelona in either January or the summer. Despite many denials, rumours continue to circle around Franck Kessie too.A return to Italy has been touted, but according to Mundo Deportivo, the Ivorian midfielder is a target for Fulham and Aston Villa in the Premier League too, with the former willing to offer up to €20m for him.Kessie arrived in the summer and has yet to find his groove at Camp Nou, playing just 481 minutes this season before suffering a thigh muscle tear that will keep him out until the final weeks of 2022. He is the fifth-least used senior player at Barcelona this season and only youngster Pablo Torre has played less this season in his position.Barcelona do have stiff competition in midfield. Sergio Busquets, Gavi, Pedri and Frenkie de Jong are all starting quality options who, at various points, have showed good moments of form.Kessie comes from a different style of football and a different system, notably operating as part of a double pivot at Milan. Xavi Hernandez has tried him just once in the holding role against Viktoria Plzen, where he performed well in his final match before injury, but seems more keen to use him as an ‘interior’.It appears he was destined to be a strong presence arriving in the box, pressing high and adding the power to drive through the midfield in Xavi’s mind. Kessie has struggled to make any impact so far, although that may be partly down to the fact that he was perhaps intended as an element of contrast in a far more structured system than he finds himself in.Barcelona will face a decision either in January or the summer. The cases of Memphis Depay and Emerson Royal prove that they are not averse to flipping a player quickly, and in Kessie’s case, it would represent a healthy profit for an underused option.With Barcelona perhaps struggling for a midfielder that can substitute Busquets, if Xavi does not feel he can perform there, it might be a better use of resources to sell Kessie and attempt to bring in another, more appropriate option.Having had the chance to watch Kessie up close for six months, it may be that Xavi can no longer see that he cannot perform the role he had previously planned out for him. In which case, it is possible Pablo Torre is a better fit for the midfield. As always at Barcelona in recent years, the financial pressure weighs heavy in any decisions too.Equally, it would seem a premature end to their plans for Kessie. An offer of €20m would have seemed small for Kessie if he had plenty of time on his contract at Milan last summer, as a key player at just 25 years of age.Selling Kessie would also reduce the number of senior options in midfield to just five, including Pablo Torre. While Kessie has struggled for chances so far, any injury would see Xavi relying on Torre in an already young midfield, with Busquets the only experienced option.Unless Barcelona can glean a significant fee and enough space in their salary limit to bring in a replacement, then a departure for Kessie would probably leave Barcelona short of depth, as they look to go deep in the Europa League and win La Liga. It should also be noted that finding quality at that price might be a struggle, unless the player in question is a free agent in the summer.Despite the consistent rumours, it would be a surprise to see Kessie exit Barcelona this winter. Unless the club can find another, better option, it also seems an unwise move.The post Analysis: Should Barcelona take an offer for Franck Kessie in January? appeared first on Football España.