Luis Enrique’s flowing Spain to launch World Cup assault – are you not entertained? 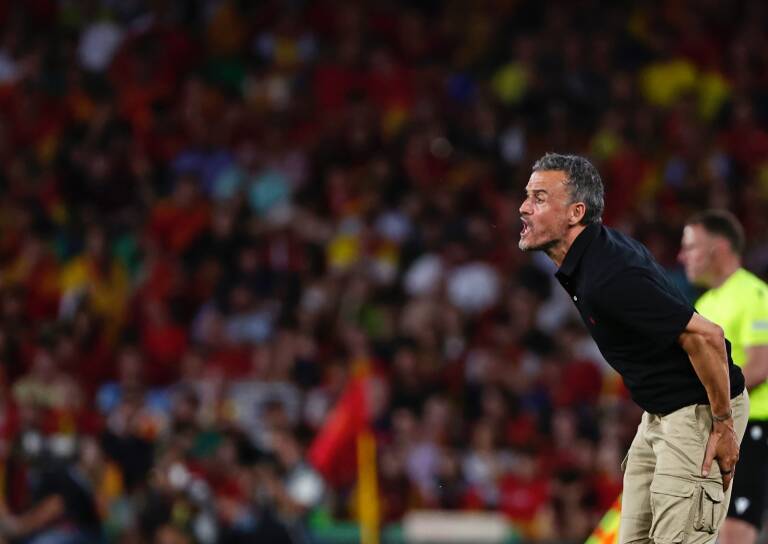 As the World Cup draws ever nearer, fans will be getting their last looks at their national sides in the current international break. In Spain, there is a curious contradiction. The nation itself is unsure exactly what or who to expect from their national side, while manager Luis Enrique could not be more sure.The style is non-negotiable – Lucho’s Spain will press aggressively, hustle quickly and play a more vertical take on the successful Spain formula that won them the World Cup twelve years ago.In terms of results, Spain are something of a conundrum. While undoubtedly Luis Enrique has been successful, taking La Roja to their best tournament finish in 11 years at last summer’s Euros, it has not all been smooth sailing.Against the the larger, more traditional powers in international football, La Roja look incisive, bold and exciting. Their defeat to Italy in the semi-finals felt unjust and their loss in the Nations League final against France several months later was mired in refereeing controversy.Yet while taking on some of the more humble countries, Spain have looked far less enticing. The Greeces, Georgias and Swedens of this world, far more comfortable to cede the main character role to the Iberians, have stifled Spain to varying degrees of success.Those questions are somewhat exacerbated by the uncertainty over who will be selected. Although some names now seem nailed on to be going to Qatar, Real Betis striker Borja Iglesias and Athletic Club winger Nico Williams have been called up to the squad for the first time.Injuries have hampered the likes of Gerard Moreno, who seemed a natural selection last summer. Former captain and Spain’s most capped player ever, Sergio Ramos, has finally found some fitness for Paris Saint-Germain, but has been left out of the squad again. This time last year a fit Ansu Fati would also have been more than well-placed for a spot in the squad. Starved of minutes at Barcelona, he is also at home with just over two months to go until the World Cup. Just three examples of an variety of talented players that would walk into most sides, but have not made it into the latest call-up.If there is one thing that can be guaranteed, it is entertainment. Luis Enrique’s robust personality, the array of talented options at his disposal and the adventurous style he promises make for an exciting cocktail. Any who have not got their World Cup tickets may well want to consider doing so.There is something of a rawness to Spain and Luis Enrique. As if they court the fire and the fight of high-pressure situations. There is no stage that fits that description better than the World Cup. As Spain take to the pitch at the World Cup, expect drama worthy of a Roman emperor.The post Luis Enrique’s flowing Spain to launch World Cup assault – are you not entertained? appeared first on Football España.