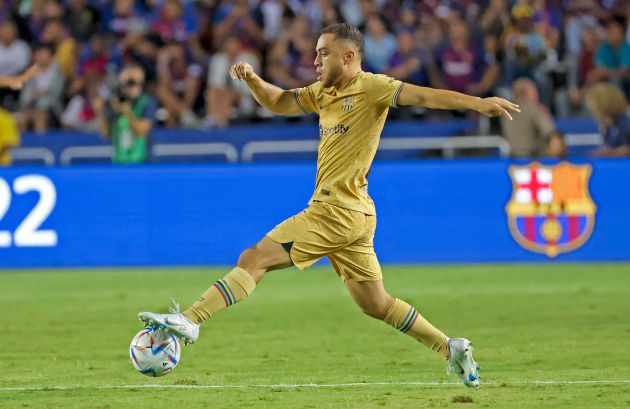 Barcelona are still looking to strengthen the squad before the end of the summer, but sales must come first now. Still unable to register Jules Kounde, adding further players only makes sense if they are able to lighten their payroll.One of the prime candidates that Barcelona have marked out as someone they can make money on without significantly weakening the squad is Sergino Dest. The American defender has rarely been trusted by manager Xavi Hernandez and was left out of the squad for their first game of the season against Rayo Vallecano.According to talkSPORT, Manchester United are interested in reuniting Dest with Erik ten Hag. The Red Devils are willing to pay up €17m for the right-back. The story was covered by Mundo Deportivo, who point out that such a quantity is approaching the €20m asking price for Dest.As has been the case with all of Barcelona’s summer exits though, the key decision will be made by the player. Dest is reportedly keen to stay at the club and fight for his place.Dest is unlikely to appear often this season for Barcelona a priori, but with Sergi Roberto the only natural right-back option in the squad currently, he is just one injury from having a role in the team. It may be that he backs himself to outdo Roberto too.The post Manchester United willing to come close to Sergino Dest asking price appeared first on Football España.