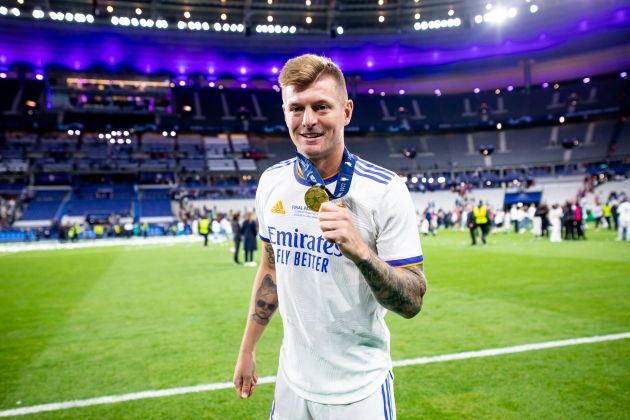 Toni Kroos’ form since the start of 2022/23 looks set to earn him a contract renewal at Real Madrid.The German international opted to retire from the national side to prolong his club career in 2021.However, despite playing a key role in the club’s success since his arrival from Bayern Munich in 2014, his future has been the source of major speculation.Los Blancos have opted for a firm approach towards squad members aged 30+ with Kroos’ midfield partner Luka Modric signing successive 12-month extensions.Casemiro’s summer move to Manchester United broke up the iconic trio, but Kroos remains vital to Carlo Ancelotti’s plans, with six starts from eight games so far in 2022/23.As per reports from Diario AS, Kroos’ consistency has convinced the club to extend his deal until 2024, with his current contract set to expire at the end of the campaign.Kroos has previously stated his desire to retire in Madrid, as he turns 33 in January, and a fresh contract would take him closer to his goal.The post Toni Kroos earns Real Madrid renewal appeared first on Football España.