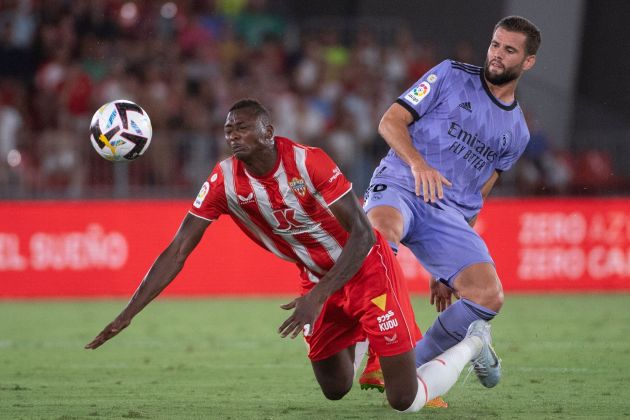 It is now over a week since Almeria’s CEO Mohamed El Assy claimed that they would be selling Nigerian striker Umar Sadiq, but so far there is no movement. He was not expected to be a factor for Almeria this season but started in their 2-1 defeat against Real Madrid in their opening game.Now two of the clubs that have been linked with Sadiq have ruled themselves out of the running. Not only that, they have made it clear that the information linking them was instigated by Almeria themselves.Speaking to Diario AS as Giovani Lo Celso was presented, CEO Fernando Roig Negueroles made it crystal clear that he would not be joining Villarreal.“The matter of Sadiq is a situation in which we are not doing anything, it is a matter that comes from Almeria and here we don’t know anything about it.”“We spoke at the beginning of the market, but it was not a viable operation and then we did not speak about it more. Right now it’s as if you are speaking to me about going to Jupiter.”Getafe, who had been mentioned in conjunction with the Nigerian forward too, appear to have ruled themselves out of the race also. President Angel Torres told Mundo Deportivo that Sadiq “is not an objective for Getafe.”With a reported €30m price tag, Almeria are relying on a big player coming in with an offer, possibly from the Premier League.However the revelation that they themselves were leaking information about Sadiq suggests that they are perhaps trying to drum up interest in their star striker. Image via JORGE GUERRERO/AFP via Getty ImagesThe post Two prospective clubs rule themselves out of signing Almeria’s Umar Sadiq appeared first on Football España.