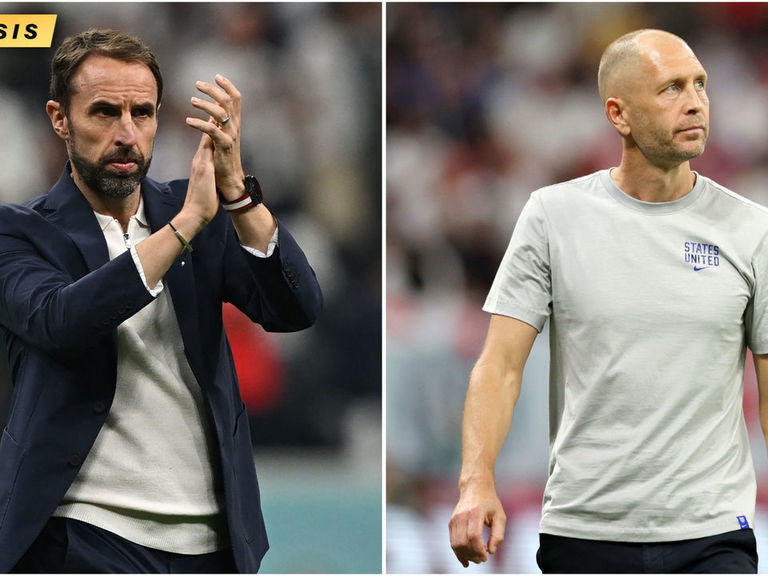 England's and the United States' World Cup group openers didn't hint at this outcome. The Three Lions strolled to a 6-2 triumph over Iran, while the U.S. ran out of steam in a disappointing 1-1 draw with Wales - but their meeting Friday drew a blank.Nil-nil, but not necessarily a bore draw.Here are three reasons why the USMNT kept England at arm's length in Qatar.Ball-playing defenders don't play ballIt started just a few minutes into the first half. Harry Maguire to John Stones, to Maguire, to Stones, to Maguire - the ball lazily clicking back and forth like a metronome in the bedroom of a doom metal artist testing a forlorn, sludgy riff.In some ways, it was understandable. Declan Rice was often the only player ahead of the defense showing for the ball, and the U.S. midfield was organized and ready to pounce. But it was also ruinously risk-averse and set the tone for an uninspiring England performance. Stones completed all of his 51 passes in his first half, but none were noteworthy.There was no incisiveness. A few snappy exchanges through the center could've helped turn the tide. England simply needed more ambition from its center-backs.Long passes in first half Player Attempts Through the middle Harry Maguire 6 1 John Stones 3 0 There wasn't a great deal Gareth Southgate could do about Maguire and Stone's tentativeness, so the decision to replace Jude Bellingham with Jordan Henderson in the 68th minute made sense. It wasn't a popular decision - especially after Bellingham's brilliance in the dominant victory over Iran - but it helped link the midfield and defense. Having an extra body in front of the defense reduced the likelihood of another ineffectual sideways pass from the center-back pairing.But overall, that substitution was more of a reflection of the United States' aggressiveness at Al Bayt Stadium: England wasn't allowed to settle. The ever-steady Henderson at least gave the Three Lions some semblance of control.McKennie back to his bestWeston McKennie has struggled to find his rhythm with Juventus since fracturing his metatarsal in the last 16 of last season's Champions League. But something - perhaps the occasion, or maybe the additional responsibility he has with the United States - allowed the midfielder to find his groove against England.The U.S. was regularly set in a 4-4-2 shape. Haji Wright and Timothy Weah were up front, Christian Pulisic was on the left flank, captain Tyler Adams and Yunus Musah took central midfield, and McKennie often appeared on the right. He's familiar with the position - having fulfilled similar duties for Massimiliano Allegri at Juve - and it allowed him to create overloads down that side with Weah and right-back Sergino Dest.The three-man combination initiated the move leading to the Pulisic missile that smashed the crossbar. The only blemish on McKennie's near-faultless opening period came when he drifted inside, met Weah's cross, and side-footed the ball over from around eight yards out. After the first half, Weston McKennie leads all United States players in:Touches (33) Possessions won (3)Passes inside the final third (8) Final third entries (4) pic.twitter.com/pQsS5KMevJ— Opta Analyst US (@OptaAnalystUS) November 25, 2022 It was a quality, two-way performance. He waded in with two tackles and a clearance and troubled his opponents with two completed dribbles and five passes into the final third before he was withdrawn in the 77th minute.This young team needs to be nurtured, and that's no truer in midfield. McKennie (aged 24), Adams (23), and Musah (19) are an extremely promising core for the U.S. and could all be at their peaks once the 2026 World Cup in North America rolls around.Brenden Aaronson (22) and Giovanni Reyna (20) were also used off the bench, and unused substitute Luca de la Torre (24) is now playing in Spain's La Liga after impressing in the Netherlands' Eredivisie. The future doesn't look bad at all.An inexcusable wasteAn out-of-form Raheem Sterling is one of the most frustrating players in elite football. When his confidence dips, his indecision soars. Instead of running for something - like the back post or the gap between a full-back and center-back - he seems like he's running from something and, in his panicked state, will stumble down the wrong alleyway or trip over a knotted tree root.In this instance, at least a trip or slip would've been an event of some kind. He was anonymous in Al Khor and failed to register a shot, key pass, cross, or dribble through 67 minutes.Far too often, Sterling is a hindrance or a passenger. He shouldn't be a starter for England.Mason Mount isn't much better when things aren't going his way. Aside from a first-time shot that tested Matt Turner, Sterling's Chelsea teammate outstayed his welcome, somehow lasting the full 90 minutes. Mount failed to offer any creativity or bite.Mason Mount and Raheem Sterling track Sergino Dest Sebastian Frej/MB Media / Getty Images Sport / GettyThe catalog of below-par performances made the sight of Phil Foden - the most technically gifted and inventive player at Southgate's disposal - sitting on the bench even more maddening. The Manchester City playmaker was charitably introduced with around 20 minutes left of the opener against Iran - with the score already 4-1 in England's favor - and otherwise seems to be an afterthought for Southgate.It's inexcusable. Harry Kane and Ivan Toney are the only Englishmen with more goals than Foden in the Premier League this season, and the 22-year-old's bewitching footwork, agility, and appreciation of space could've been invaluable in such a congested game.Foden has a knack of conjuring something out of nothing. And against the U.S., England produced a whole lot of nothing.Copyright © 2022 Score Media Ventures Inc. All rights reserved. Certain content reproduced under license.