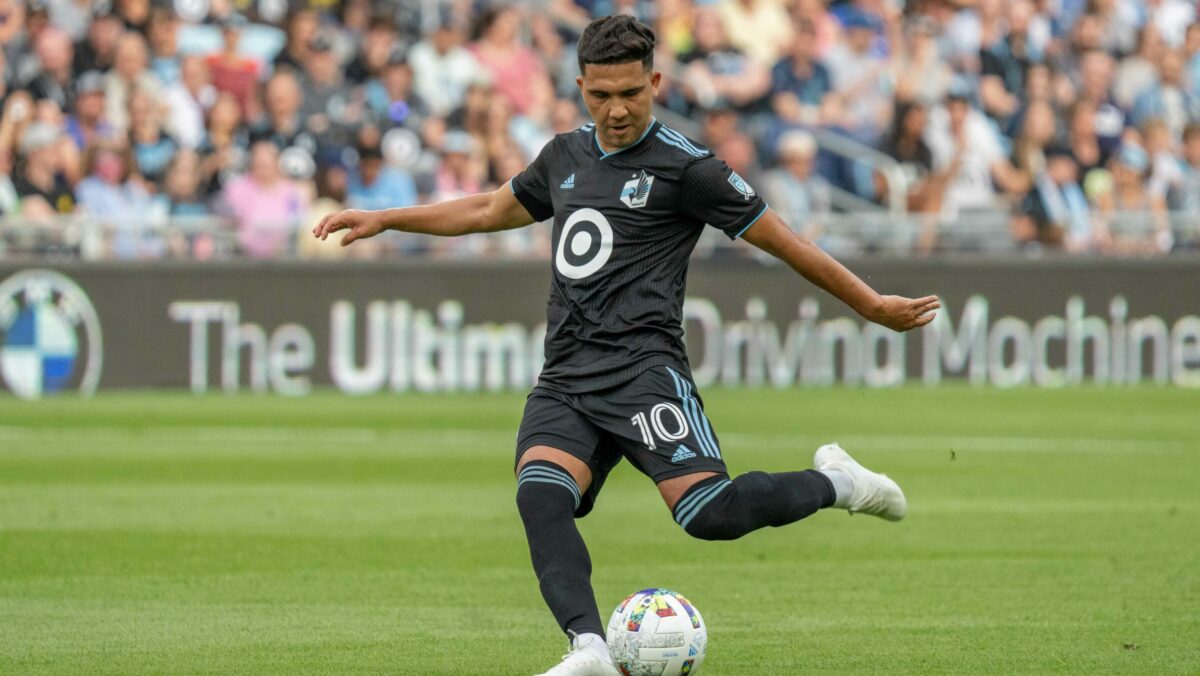 A packed week of MLS action continued Sunday, with contenders such as New York City FC and Real Salt Lake dropping points. Among the victors of the weekend are the New York Red Bulls, which picked up three more points on the road, and FC Cincinnati, which earned a point against the New England Revolution. The day’s most high-profile match came in New York City, with Atlanta United furthering NYCFC’s pain under interim coach Nick Cushing. Valentin Castellanos scored twice to put himself tied atop the MLS Golden Boot standings, but it was Atlanta United’s Dom Dwyer who scored a late goal to take one point. Minnesota United dashed the hopes of another key performer in the Western Conference. Emanuel Reynoso is one of the week’s best players, with two goals and one assists in a 3-2 takedown of RSL. Here are the highlights of Sunday’s MLS Week 17 action. Atlanta United 2, NYCFC 2 (Valentin Castellanos 37′, 58′) – (Josef Martinez 56′, Dom Dwyer 86′) Vincent Carchietta-USA TODAY Sports Man of the Match: Valentin Castellanos fronted an NYCFC attack that struggled aside from his own production. Two goals from Castellanos were enough to at least earn a point for the home side. Moment of the Match: Dom Dwyer’s 86th-minute goal showed Dwyer’s effectiveness as a late sub and earned a point from a tough road trip for Atlanta United. Match to Forget: Atlanta United defender George Campbell couldn’t keep up with Castellanos in a foot race on the first NYCFC goal and found himself in no man’s land on the second goal conceded by Atlanta. Crew 0, Union 0 Man of the Match: Andre Blake earned the point for the Union by making five saves, including one of a penalty kick. Moment of the Match: The Crew received a golden opportunity to go ahead with a penalty call in the 19th minute. Union goalkeeper Andre Blake stopped Pedro Santos’ effort. Match to Forget: The Union midfield ceded plenty of possession and constant movement into the attacking third for the Crew. Alejandro Bedoya won only two duels and generally struggled to stop the Crew’s movement. Revolution 2, FC Cincinnati 2 (Dylan Borrero 30′, Gustavo Bou 55′) – (Henry Kessler (OG) 4′, Brenner 73′) Brian Fluharty-USA TODAY Sports Man of the Match: Gustavo Bou showed he can be the Revs’ answer at center forward with a header goal and eight shots. Moment of the Match: Brenner continued to impress, scoring the equalizing goal for FC Cincinnati after a quick turnover in the middle of the field in the 73rd minute. Match to Forget: Five minutes after making an incredible point-blank save, 23-year-old goalkeeper Djordje Petrovic’s blunder led to FC Cincinnati’s equalizer. Petrovic tossed the ball into the middle of the pitch, where Damian Rivera had little chance against two onrushing opponents. Sporting KC 0, Red Bulls 1 (Aaron Long 53′) William Purnell-USA TODAY Sports Man of the Match: Aaron Long not only scored the goal to put the Red Bulls ahead, but he also made four clearances and won two aerial duels on the way to defending a lead while down a man for a significant stretch. Moment of the Match: Aaron Long headed home a cross from Lewis Morgan in the 53rd minute to hand the Red Bulls a lead they were determined to defend. Match to Forget: Johnny Russell couldn’t quite break through on the right side and make the most of Sporting KC’s man advantage for the final 17 minutes of the match. Loons 3, RSL 2 (Emanuel Reynoso 9′, 45+3′, Luis Amarilla 61′) – (Jefferson Savarino 71′, Anderson Julio 76′) Matt Blewett-USA TODAY Sports Man of the Match: Emanuel Reynoso shined in this game, scoring two goals of his own and nearly setting up Luis Amarilla for another one. Moment of the Match: Emanuel Reynoso’s second goal, in which he punched in a rebound of his own saved penalty kick, made for an uphill battle for RSL heading into the second half. Match to Forget: RSL goalkeeper Zac MacMath could have done better on all three Loons goals, with Reynoso beating him right down the middle, then punching in a clear-cut penalty rebound and Luis Amarilla chipping over him. Dynamo 1, Charlotte FC 2 (Matias Vera (OG) 28′, Andre Shinyashiki 74′) – (Fafa Picault 81′) Troy Taormina-USA TODAY Sports Man of the Match: Charlotte FC midfielder Brandt Bronico recovered the ball often in advanced areas, assisted the winning goal and won three duels. Moment of the Match: Andre Shinyashiki’s 74th-minute goal showed that Charlotte FC’s carving of the Dynamo back line could finally pay off. Match to Forget: Dynamo central defender Daniel Steres failed to track Karol Swiderski in the box for Charlotte’s first goal, leaving the attacker wide open and setting the tone for a difficult night defensively. Nashville SC 2, Timbers 2 (Sean Davis 19′, Hany Mukhtar 57′) – (Dairon Asprilla (pen) 64′, Jaroslaw Niezgoda 70′) Christopher Hanewinckel-USA TODAY Sports Man of the Match: Hany Mukhtar jumpstarted Nashville SC’s attack, taking six shots and scoring their second goal. Moment of the Match: Jaroslaw Niezgoda put a well-placed shot into the top of the net in the 70th minute, turning the tide completely in the Timbers’ favor. Match to Forget: Nashville goalkeeper Elliott Panicco had a difficult showing, giving up a penalty kick which Dairon Asprilla scored and failing to make a stop when coming out to face Jaroslaw Niezgoda on the second goal. Quakes 2, Fire 1 (Benji Kikanovic 47′, 87′) – (Brian Gutierrez 90+5′) Kelley L Cox-USA TODAY Sports Man of the Match: Benji Kikanovic provided a surprise for the Quakes in just his fourth start. Kikanovic scored both goals, including a late goal that proved to be the winner. Moment of the Match: Kikanovic found space in the box and sent a shot into the opposite side netting to stretch the Quakes’ lead to two goals in the 87th minute. Match to Forget: The Fire struggled to keep control in the midfield. Giveaways and poor passing from Gaston Gimenez left the Fire with little chance to stop the Quakes’ speed.