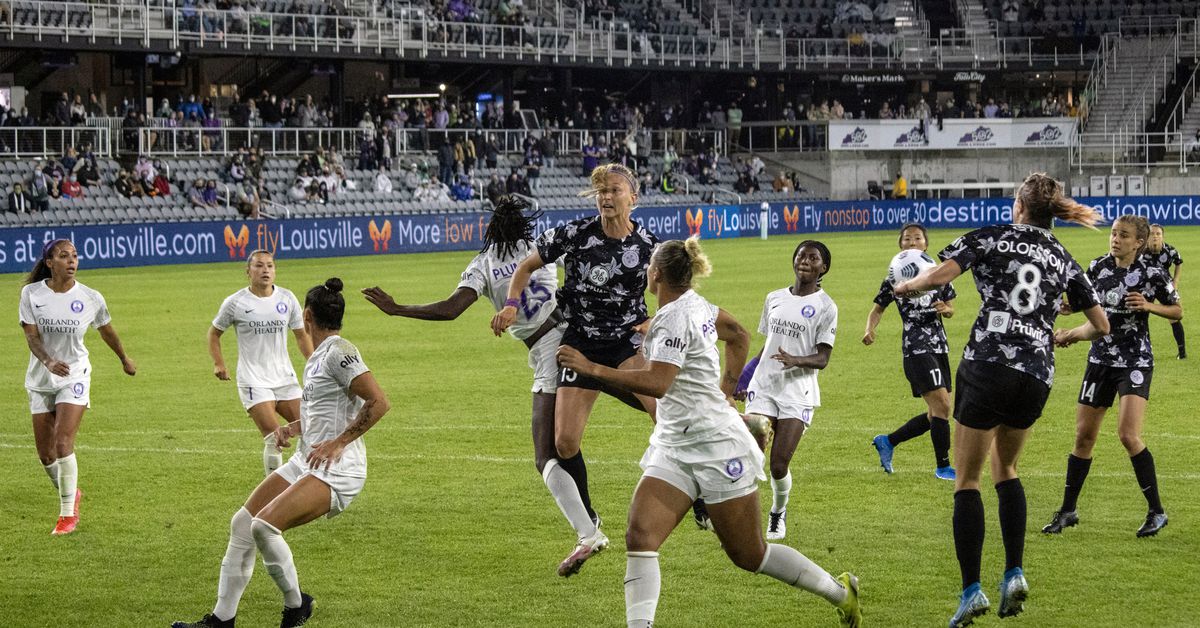 Marty Pearl/Special to Courier Journal via Imagn Content Services, LLC The Pride look to break a three-game losing streak as they take on Racing Louisville in Kentucky. Welcome to your match thread as the Orlando Pride (7-8-7, 28 points) take on Racing Louisville FC (4-12-5, 17 points) in Kentucky. This is the third and final time the two teams will meet during the 2021 season. It’s the Pride’s penultimate match and final road game of the 2021 NWSL regular season. History This is Louisville’s inaugural season, so the two teams have a limited history. The two teams last met on Sept. 11 in Orlando. The game featured Alex Morgan’s first appearance for the team since leaving for the Olympics, albeit as a substitute. Sidney Leroux’s 30th-minute goal was followed by a Marta strike four minutes later. Cece Kizer pulled one back for the visitors in the 51st minute, but Morgan scored on her first touch in the 65th minute, sealing the 3-1 win for the Pride. The teams were in the same group during the 2021 NWSL Challenge Cup, first meeting on April 10 in Louisville. Kizer scored the first competitive goal in Louisville’s history in the 12th minute, before Taylor Kornieck equalized in the 44th minute. It appeared as though the Pride had won when Abi Kim scored in the 88th minute, but poor marking by Toni Pressley allowed Brooke Hendrix to net the equalizer three minutes into second-half injury time, resulting in a 2-2 draw. The two teams played their first NWSL regular-season game on July 9 at Exploria Stadium. After scoring the opening goal in the first meeting, Kizer set up Ebony Salmon in the 21st minute for the opening goal in the second match-up. While Louisville stole a point late in the first meeting, Leroux scored four minutes into injury time to steal a point for the Pride in the second. Overview The Pride enter this game on a three-game losing streak and on the brink of being eliminated from playoff contention. After losing 3-0 to OL Reign and 3-2 to NJ/NY Gotham FC, a sixth-minute strike by Kealia Watt was the difference in the team’s 1-0 loss to the Chicago Red Stars. Morgan missed a penalty — and a chance to equalize and earn the Pride a point — in that match. Heading into Wednesday night’s game in Illinois, the Pride had conceded six goals in the previous two games. While they only conceded once against Chicago, a major problem continued. The Pride defense gave up third-minute goals against the Reign and Gotham, and conceded a sixth-minute goal against the Red Stars. Making matters worse, the Pride have gotten little production from Morgan, Leroux, and Jodie Taylor, the team’s three starting forwards, during this skid. However, while Taylor hasn’t scored since Aug. 14, Morgan, Leroux, and Marta all scored in the last meeting against Louisville. The Pride need a better start and more clinical offensive production to win the game tonight. The first 15 minutes will have a big impact on the outcome, as the Pride have had trouble playing from behind the last three games. Louisville comes into this game in worse form than the Pride. After falling 3-1 in their last meeting with Orlando, tonight’s opponent lost 4-0 to the Houston Dash, 3-1 to the North Carolina Courage, and 3-0 to the Washington Spirit in their last three games. The last four losses have contributed to Louisville’s ninth-place positioning and elimination from playoff contention. The Pride have yet to be eliminated from the postseason, but their hopes took a big hit on Wednesday night. They now sit in eighth place and four points behind a playoff spot with two games left. “The last few games have felt like playoffs already for us because we feel like we’re kind of in a must-win situation,” interim head coach Becky Burleigh said about the upcoming games. “So I think that these last two games will be no different. Clearly our backs are up against the wall, and we need to get results and we’re going to be well aware of that.” The Pride remain relatively healthy heading into the final two games. The team’s injury list is almost the same as it was Wednesday night, consisting of Jade Moore (left knee), Viviana Villacorta (knee surgery), and Parker Roberts (COVID protocol). The only difference is that left back Courtney Petersen (right foot) is listed as questionable. An addition to the team is Australian midfielder Emily van Egmond, who was re-signed by the Pride on Oct. 7. Van Egmond made 25 appearances and 19 starts between 2018 and 2020 before leaving for West Ham United. She rejoins the Pride after rejecting a new contract in England and is with the team in Louisville. Racing Louisville will be missing Gemma Bonner (right hip), Addisyn Merrick (left ankle), and Nadia Nadim (right leg). Nadim suffered her injury in the last game between the two teams at Exploria Stadium, resulting in her being carried off on a stretcher. Projected Lineups Orlando Pride (4-3-3) Goalkeeper: Ashlyn Harris. Defenders: Courtney Petersen, Amy Turner, Ali Krieger, Ali Riley. Midfielders: Marisa Viggiano, Marta, Gunny Jonsdottir. Forwards: Sydney Leroux, Alex Morgan, Jodie Taylor. Racing Louisville FC (4-3-3) Goalkeeper: Michelle Betos. Defenders: Erin Simon, Kaleigh Riehl, Brooke Hendrix, Julia Ashley. Midfielders: Lauren Milliet, Freja Olofsson, Emily Fox. Forwards: Cece Kizer, Ebony Salmon, Savannah McCaskill. Referees REF: Matthew Franz. AR1: Brooke Mayo. AR2: Mike Nickerson. 4TH: Youssef Elmessoussi. How to Watch Match Time: 7:30 p.m. ET. Venue: Lynn Family Stadium — Louisville, KY. TV: None. Streaming: Paramount+ (U.S.), Twitch (International). Twitter: For live updates, follow along at the Orlando Pride’s official Twitter feed (@ORLPride) and, since the main account for The Mane Land will be live tweeting the Orlando City match, follow my personal account (@ManeLandSean). Enjoy the match. Go Pride!