Cristiano Ronaldo left bloodied and bandaged by nasty collision but fights on for Portugal – only to miss a chance and give away a penalty, but Manche 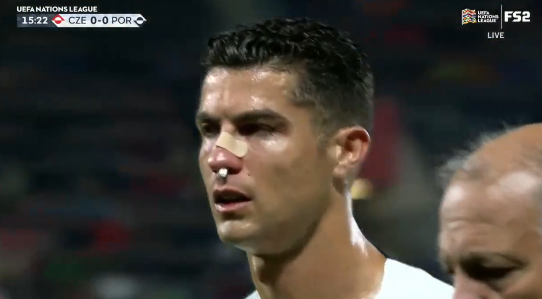 Cristiano Ronaldo was left covered in blood after a collision while playing for Portugal, but managed to stay on the pitch, only to give away a penalty. The Manchester United forward took a nasty arm to the face from Czech Republic goalkeeper Tomas Vaclik while challenging for a header, and was left red-faced – quite literally. Ronaldo was left with blood pouring from his face@FOXSoccer And left the pitch in a state@FOXSoccer The Portugal captain was bloodied and bruised from the 13th minute clash and was then treated with a bandaged and swollen-looking nose, plugged up by cotton. But despite being removed from the field of play and appearing to be in serious pain, the 37-year-old lived to fight another day, and kept on playing. Just 10 minutes later the usually clinical forward was clearly still feeling the after effects when Bruno Fernandes pulled a pass back, only for Ronaldo to whiff on a first-time finish. His blushes were soon spared though when Man United teammate Diogo Dalot continued his fine season when his surging run forward was rewarded by a Rafael Leao pass, calmly tapped in by the fullback. It was then two when Fernandes tucked in an even easier finish from a brilliantly-placed Mario Rui cross. Ronaldo might have thought he was out of the woods, but an errant arm from the five-time Champions League winner then gifted the Czechs a penalty just before the break. After Schick’s penalty miss and his teammates’ goals, Ronaldo was soon smiling againAFP Most read in Football past Keane booed and Berbatov scores beautiful goal, but Liverpool legends beat Man United have that YouTuber Speed gets revenge on KSI with brutal tackle in charity match third wheel Murray wants to take McCoist out for 60th birthday - but Brazil isn't invited LIST How to spend £1,841 in Norwich shop as questions asked of PM Truss over bizarre bill SWITCH England told to play Rice in defence and drop Maguire from squad after Italy loss BLOW Dyche says Burnley could have signed Kane for £7m but ended up with Boyd and relegated However, Ronaldo was once again saved, with Euro 2020 star Patrik Schick sending the spot kick wide, keeping Portugal out of reach. Schick was then further punished for his wastefulness at the start of the second half when Dalot made it 3-0 from a Fernandes assist. Watch the World Cup with talkSPORT At talkSPORT we are powered by fans, so come and join us for the ultimate World Cup fan experience this winter – at the talkSPORT Fan Zone. In a huge indoor venue under the arches at Waterloo in London, we’ll bring you live screenings of every World Cup game. There will be Q&As with talkSPORT talent, you’ll be part of our live broadcasts, and there will be plenty of food and drink on offer too. Come and enjoy the best World Cup fan experience in London – and enjoy a pint on us – with tickets for England and Wales’ group stage games on sale now HERE!