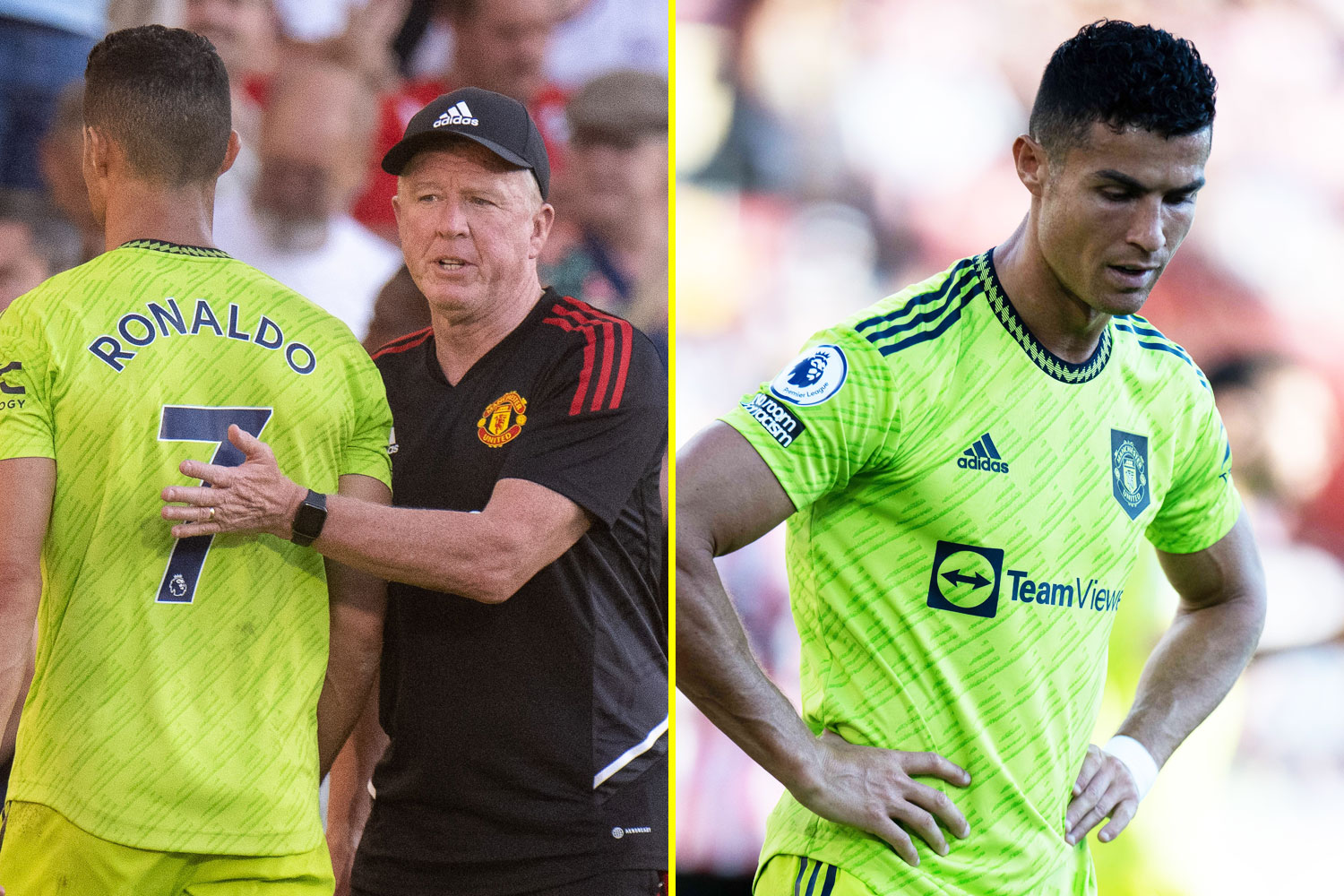 Cristiano Ronaldo ignored a request from Steve McClaren to go and acknowledge the travelling Manchester United support after their embarrassing defeat to Brentford. Many Red Devils fans had already gone home, and who could blame them after the 4-0 defeat in west London, but some stuck it out to the bitter end despite the woeful display. Ronaldo cut a frustrated figure throughout the defeat to BrentfordGetty United’s shortcomings were exposed once again and Ronaldo cut a frustrated figure throughout the contest. A number of players went over to the away section to acknowledge their support and apologise for the defeat. According to the Manchester Evening News, United assistant McClaren urged Ronaldo to go over and clap the fans. The two were seen exchanging a couple of words before he then carried on down the tunnel. Captain Harry Maguire was also not far behind Ronaldo. It is not the first time the Portugal superstar has been accused of ignoring the fans and heading off the pitch after games. Most read in Football LIVE Brentford v Man United: Reaction as Ronaldo and Co. bottom of the league after mauling tragic Man United should tell Erik ten Hag to 'pack up' after Brentford 'shambles' SHOCKER 'It's annihilation' - Neville stunned as Man United hammered 4-0 in horror show JOKER Carragher trolls Neville by changing profile picture during Brentford vs Man United PAIN 'I'm going off grid' - Ferdinand reacts to Man United going 4-0 down at Brentford UNHAPPY 'Ya gang of cowards!' - Bellew rages at costly VAR oversight in Everton defeat Ronaldo headed straight down the tunnel at full-timeGetty The 37-year-old has wanted to leave the club all summer and has been denied that request. Back-to-back defeats at the start of the season are unlikely to change his opinion. The United Stand host, and talkSPORT regular, Mark Goldbrige believes that Ronaldo was not wrong for wanting to leave the club this summer as he could see this coming. He told talkSPORT: “A lot of people on this show, and away from it, said we need to get rid of Ronaldo. Ronaldo is no good for United. Get rid of Ronaldo, he’s not bigger than the club, he doesn’t want to be there. “Maybe they are right, maybe they are wrong, but was Ronaldo wrong? “Is Cristiano Ronaldo wrong for saying ‘I want to leave Manchester United?’ “He’s had one of the most decorated careers in world football and is still a fantastic footballer. Ten Hag has suffered a disastrous start at UnitedAFP “In June, he sees United have bought nobody and says he wants to go as there’s no ambition there. “He gets slaughtered for it. We start the season, lose to Brighton, lose to Brentford comprehensively. “Does anyone disagree with Ronaldo now? He saw it coming, he was there last year.  “What we see as fans and the media is United performing badly. Ronaldo goes to work every day, trains with these players, he communicates with these players and knows their level. Ronaldo still wants to leave United this summer… and you can see whyGetty “He knows what the level is at Real Madrid, Juventus, Portugal. He knows what a good coach is and the limitations of a good coach is. “He was always respectful of Ten Hag, but Ronaldo saw this coming. He knew, no matter how good Ten Hag was he knew this squad, these players, and the mentality.  “He knew this was coming.” Betting Offers Of The Weekend ALL CUSTOMERS: Bet £5 via the talkSPORT EDGE app with Paddy Power and get a £5 free bet – available to all customers* – CLAIM HERE NEW CUSTOMERS: Bet £10 with Bet365, Get £50 in Free Bets* – CLAIM HERE Paddy Power All Customers: Place a £5 Sportsbook Bet through the talkSPORT EDGE app between the 1st and 31st August. Get a £5 free bet on the next Monday after your qualifying bet. T&C’s apply. 18+ Begambleaware.org Bet365: Open account offer. Bet £10 & Get £50 in Free Bets for new customers at bet365. Min deposit requirement. Free Bets are paid as Bet Credits and are available for use upon settlement of qualifying bets. Min odds, bet and payment method exclusions apply. Returns exclude Bet Credits stake. Time limits and T&Cs apply 18+ Begambleaware.org SEE ALL FREE BET OFFERS FOR NEW AND EXISTING CUSTOMERS HERE