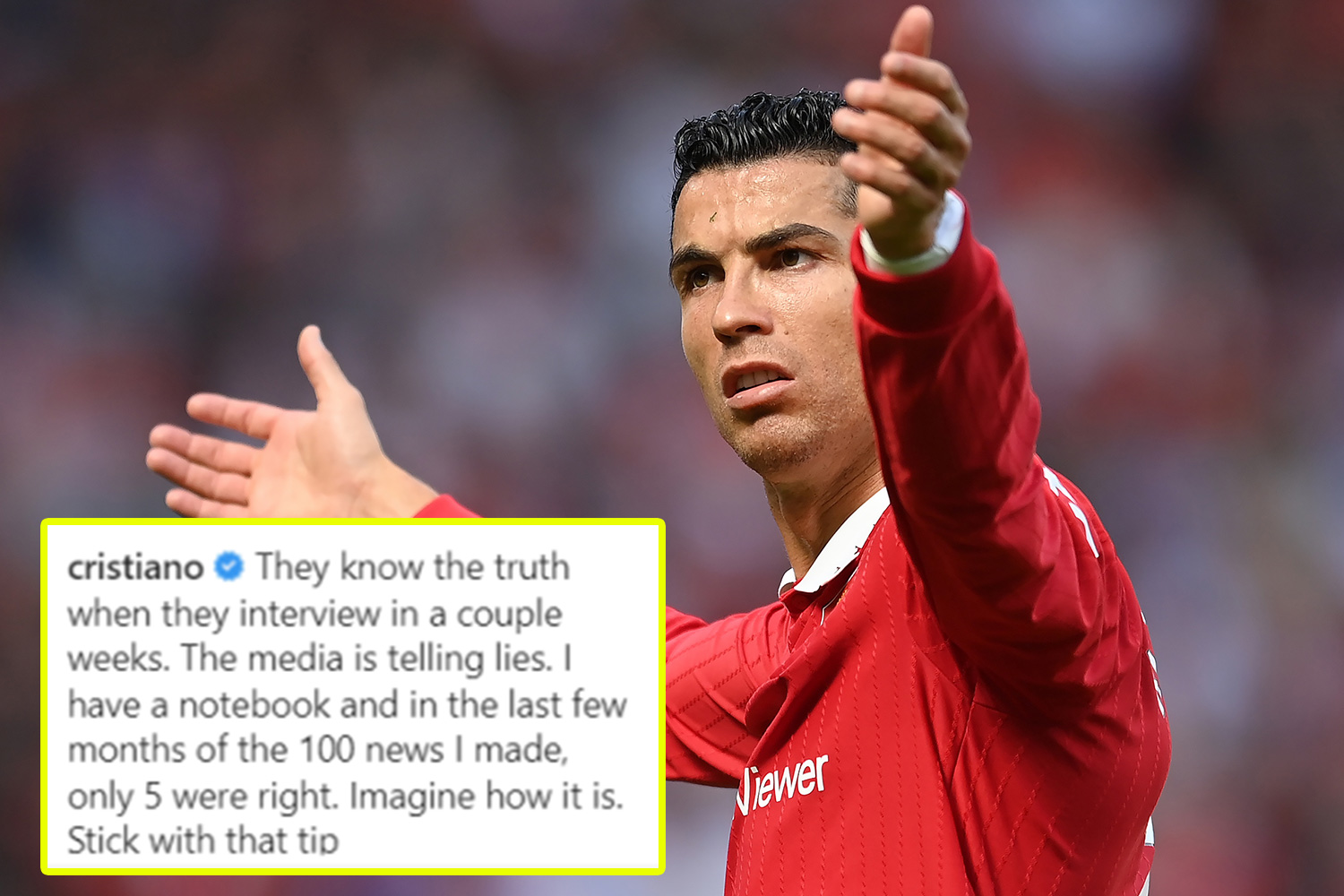 Cristiano Ronaldo says he’ll do an interview in the coming weeks to tell the truth about this summer’s transfer speculation. The Manchester United star has been a mainstay on the back pages in recent months after it emerged that he was looking to leave the club following their failure to qualify for the Champions League. Ronaldo has been the talk of the town over the course of the summerGetty This led to uncertainty over his situation, including a spell training on his own in Portugal, missing United’s pre-season trip to Australia and then attracting criticism for leaving the club’s pre-season clash with Rayo Vallecano at half-time after being brought off at Old Trafford. Since then the 37-year-old was a second half substitute in Man United’s season opener against Brighton, before starting in the 4-0 hammering against Brentford at the weeekend. While no serious interest has emerged for Ronaldo over the course of the summer, clubs such as Chelsea, Sporting Lisbon and Atletico Madrid have emerged as potential destinations for the forward. In a post on Instagram, it was suggested by journalist Edu Aguirre that Atletico are in fact interested in the player, but a move is unlikely due to the reaction of supporters if their interest is made public. Ronaldo vehemently denied that claim with a frank comment that suggested that he firmly disagrees with the media’s reporting of his situation this summer. Replying to a post on Instagram, Ronaldo’s translated comment said: “You’ll know the truth when I give an interview in a few weeks. Most read in Football gossip Man United ready Casemiro move amid £42m deal for new striker, Alli to Besiktas DEAL 'It's in play' - Jordan reveals he's 'potentially looking at' buying Coventry City surprise Ajax's reaction to Man United's bid for Martinez and Arsenal's concerns revealed vile Andersen reveals death threats in '300-400' abusive messages sent after Nunez clash ban Darwin Nunez red card: Liverpool ace to miss Man United trip but could face Everton home Man United urged to sign Brentford or Newcastle strikers over Matheus Cunha IG: cr7.o_lendarioRonaldo snapped back at reports of a move to Atletico Madrid[/caption] Ronaldo will tell all in the coming weeksGetty “The media only tells lies. “I have a book of notes and in the last few months out of 100 news stories they only got five right, imagine how things are. “Here’s a tip for you.” Offer Of The Day PADDY POWER ALL CUSTOMERS: Bet £5 via the talkSPORT EDGE app with Paddy Power and get a £5 free bet – available to all customers* – CLAIM HERE BETFAIR NEW CUSTOMERS: Bet £10 on 13.50 York on Wednesday, Get £60 in Free Bets* – CLAIM HERE Paddy Power All Customers: Place a £5 Sportsbook Bet through the talkSPORT EDGE app between the 1st and 31st August. Get a £5 free bet on the next Monday after your qualifying bet. T&C’s apply. 18+ Begambleaware.org Betfair: 18+. New customer offer. Bet £10 on SBK on the 13:50 York, Wednesday, 17th August. Get a £10 free bet for each of the remaining races on the card (£60 in total). Only deposits with Cards apply (Apple Pay deposits excluded). T&C apply. begambleaware.org SEE ALL FREE BET OFFERS FOR NEW AND EXISTING CUSTOMERS HERE