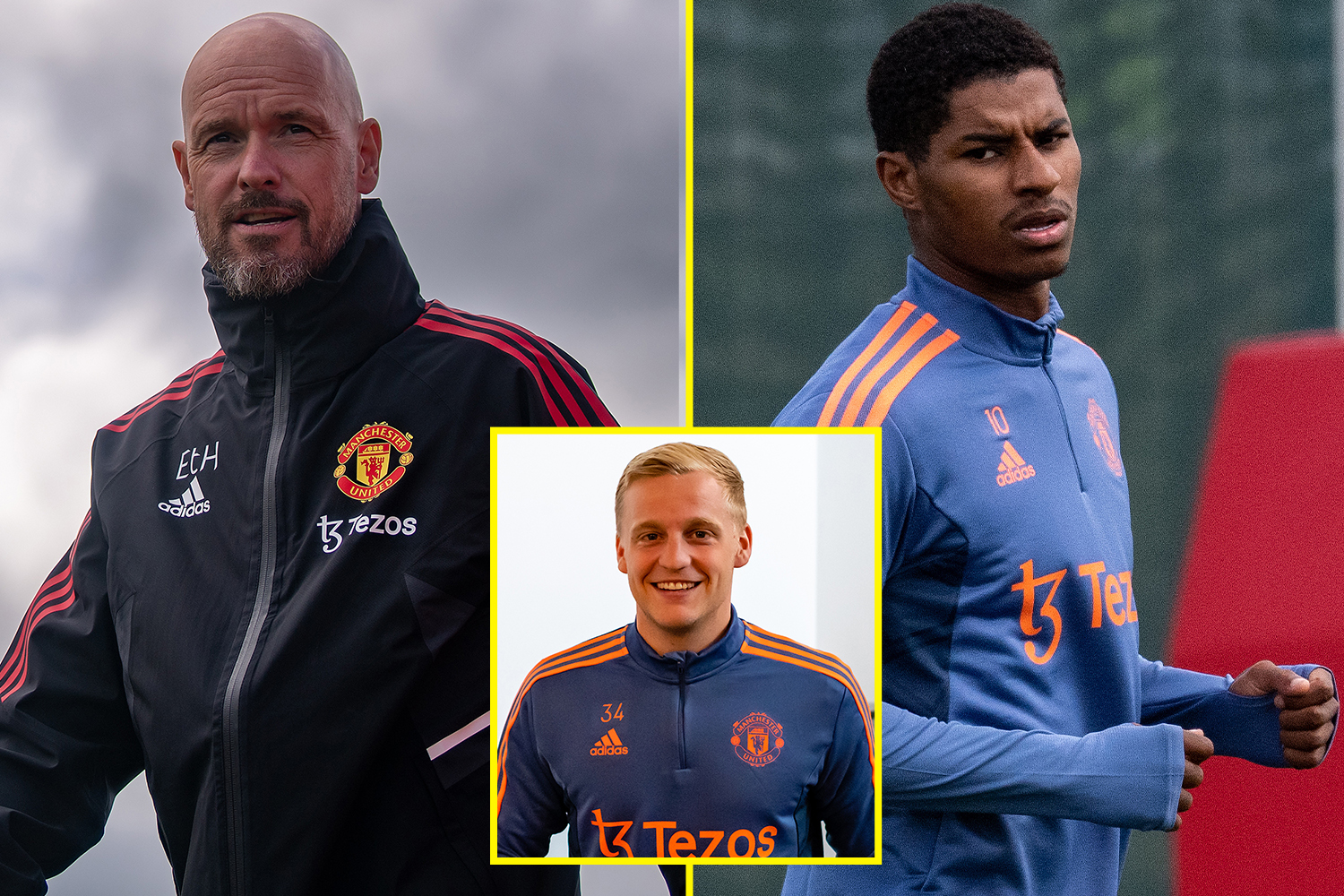 Erik ten Hag addressed Manchester United players for ‘several minutes’ before taking charge of his first training session as manager. There will be a staggered return to training for individuals due to their commitments with their respective national sides, however, there were a number of recognisable faces in the new boss’ first session. Preparations for the new season are under wayGetty This was the first chance for Ten Hag to get a look at his new playersGetty Players including Marcus Rashford, Jadon Sancho and David de Gea reported back to the base at Carrington as preparations for the new season get under way. Fellow Dutchman Donny van de Beek cut an enthusiastic figure as he reunited with his old Ajax boss. Also reporting for training was Anthony Martial, who’s future at Old Trafford is looking uncertain having come back from a poor loan spell at Sevilla in the second half of the 2021/22 season. Cristiano Ronaldo, though, was not there as he is one of the players enjoying an extended break having played for Portugal immediately after the season ended. The 37-year-old is with his family in Majorca, but as you might expect, is still training as he prepares for a new Premier League season. An old friend of the club was also seen at the training ground as Ten Hag’s assistant Steve McClaren, who worked as Sir Alex Ferguson’s assistant for two years, walked through the doors. Most read in Football NEWS Chelsea eye Sterling and Ake, Maguire to Barca link, Jesus to Arsenal 'done' busy Newcastle's four transfer priorities as they 'hold talks' with Leeds over Raphinha LEGEND Bellingham comment on Henderson's Instagram post has many fans saying the same thing WELCOME Lille star reveals what Newcastle fans can expect from £32m signing Botman DJED SET? 'Key' transfer will prove if Levy is backing Conte, claims Andros Townsend GOSSIP Everton star responds to reports linking 'hero' Richarlison to Tottenham transfer banging on 'Moaning' Klopp has 'got his way again' with rule change, says Everton man marquee Jesus becomes Arsenal's highest paid player with move from City '100 per cent done' Ronaldo is training alone while on holiday with his family@cristiano Before taking to the field, the players underwent routine medical tests and gym work before heading out onto the training pitches in the afternoon, the Manchester Evening News reports. The report adds that Ten Hag, flanked by McClaren and coach Mitchell van der Gaag, then spoke to a combined group of first-team squad members and under-21 players for ‘several minutes’ at the start of the session. The players spent over two hours on the grass, the bulk of it ball work with running drills included. In the session was starlet Alejandro Garnacho, the FA Youth Cup hero making an early return to training despite playing at the Toulon tournament for Argentina’s under-20 side. His last match came on June 10. Local reports also add that some players who had arrived before 9am stayed until gone 4pm. Work time #MUFC pic.twitter.com/9iUMoKRhDN— Manchester United (@ManUtd) June 27, 2022 First choice goalkeeper David de Gea reported for trainingGetty As did substitute goalkeeper Tom Heaton but there’s no sign of Dean Henderson, who’s reportedly closing in on a loan move to Nottingham ForestGetty Brandon Williams also returns having spent the 2021/22 season on loan at Norwich, who finished bottom of the Premier LeagueGetty This is a huge season for Van de Beek, who has had a torrid time since signing for Man United in the summer of 2020Getty It’s not clear whether Martial has a future at the club thoughGetty Ten Hag and his assistant Van der Gaag have a huge job on their handsGetty But they do have the experience of McClaren to call onGetty Aaron Wan-Bissaka will be desperate to get his form back on track after a poor 2021/22 seasonGetty As will Marcus Rashford, who’s been on a downward spiral on the pitch in recent seasonsGetty Jadon Sancho also struggled for long periods of the seasonGetty Victor Lindelof reported for training. Harry Maguire, who was linked with a shock move to Barcelona this summer, will come back laterGetty But 17-year-old forward Garnacho cut his break short to make it to Ten Hag’s first training sessionGetty Charlie Savage, son of ex-player Robbie, was also in the training sessionGetty Ten Hag’s job at Man United is much harder than doing a few keepy uppies, that’s for sureGetty Ten Hag will be expected to hit the ground running following his move from Ajax where he ended his time there as a league champion. Last season, United’s 58-point total was their worst tally in 32 years as they ended the campaign in sixth. That was 13 points off qualifying for the Champions League and a huge 35 points off champions and rivals Man City. In addition, the club conceded their most goals in a league season (57) since 1978/79. Ten Hag could soon be joined by new signings if they can land top target Frenkie de Jong from Barcelona. Reports add the midfielder, who played for the manager at Ajax, could join the club this week if talks with the Spanish side are successful. The new Premier League season begins on Friday 5 August. Offers Of The Day 888Sport – Bet £10 on Wimbledon, Get £40 In Free Bets* – CLAIM HERE Min deposit £/€/$10 • Offer is valid until 10/07/2022 23:59 • A qualifying bet is a ‘real money’ stake of at least £/€/$10 on Tennis market • Min odds 1/2 (1.50) • Free Bets expire after 10 days and valid only for Tennis • Free Bet stakes not included in returns • Withdrawal restrictions, payment methods, country & Full T&C’s apply. 18+ Begambleaware.org SEE MORE FREE BET OFFERS HERE