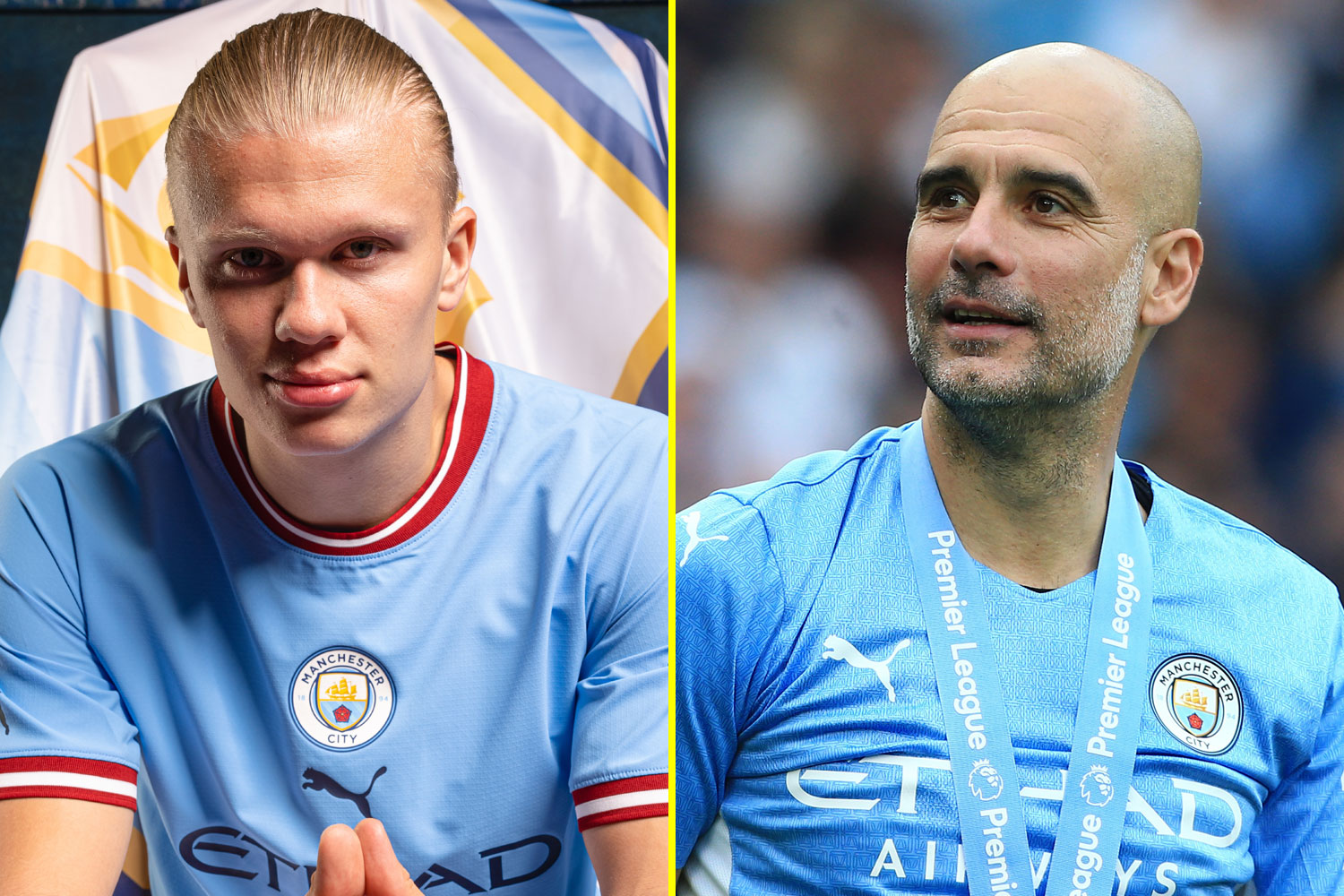 Erling Haaland will have his eyes set on joining an exclusive Pep Guardiola club. The Spaniard has managed some of the biggest names in world football, but only three of them have broken the 100 goal mark for him. Haaland is set to be the main man at City next seasonGetty Those three are Lionel Messi, Sergio Aguero and Raheem Sterling. Robert Lewandowski would likely have joined that list had Guardiola stayed at Bayern Munich for longer than three seasons. His return of 67 goals in 100 games was not a bad effort though. Messi fired in 211 goals in just 219 games, while Aguero hit 124 goals in 182 games. Sterling has been Guardiola’s most used player, making 292 appearances while netting 120 times. He looks set to move on, though, having been linked with a £50million move to Chelsea. Gabriel Jesus is the next closest to joining the Spaniard’s very own 100 club. He hit 95 goals for Pep in a City shirt, but his imminent transfer to Arsenal means he will not add to that tally. Most read in Football NEWS Jesus completes Arsenal medical, Man United make De Jong progress, £100m Spurs swoop tests Jesus completes Arsenal medical as Brazilian pictured arriving ahead of £45m transfer upgrades Rice stays, Lingard and Chelsea starlet - How West Ham XI could look next season New era Ten Hag takes first training session in new era and players even cut breaks short busy Newcastle's four transfer priorities as they 'hold talks' with Leeds over Raphinha LEGEND Bellingham comment on Henderson's Instagram post has many fans saying the same thing Messi was prolific for Guardiola at BarcelonaGetty Aguero is a Man City legend and was an important player for Guardiolagetty Haaland is the latest prolific goalscorer to be added to Guardiola’s ranks and he will get plenty of chances at the Manchester club. The Norwegian superstar may only have three seasons to hit that mark, though. Guardiola’s current contract runs until 2023, however, reports say he has agreed an extension until 2025. The Spaniard is unlikely to extend beyond that and has already talked about wanting to take a break from football whenever he leaves Man City. Chelsea are stepping up their efforts to get a deal for Sterling doneGetty That target of 100 goals in three seasons would not be out of the question for Haaland. In just two-and-a-half at Borussia Dortmund, he fired in 86 in just 89 games. “This is a proud day for me and my family,” he told mancity.com after completing his £51m move. “I have always watched City and have loved doing so in recent seasons. You can’t help but admire their style of play, it’s exciting and they create a lot of chances, which is perfect for a player like me.  Guardiola has one of the most exciting strikers in world football at his disposalGetty “There are so many world-class players in this squad and Pep is one of the greatest managers of all-time, so I believe I am in the right place to fulfil my ambitions.  “I want to score goals, win trophies and improve as a footballer and I am confident I can do that here. This is a great move for me and I can’t wait to get started in pre-season.” Offers Of The Day 888Sport – Bet £10 on Wimbledon, Get £40 In Free Bets* – CLAIM HERE Min deposit £/€/$10 • Offer is valid until 10/07/2022 23:59 • A qualifying bet is a ‘real money’ stake of at least £/€/$10 on Tennis market • Min odds 1/2 (1.50) • Free Bets expire after 10 days and valid only for Tennis • Free Bet stakes not included in returns • Withdrawal restrictions, payment methods, country & Full T&C’s apply. 18+ Begambleaware.org SEE MORE FREE BET OFFERS HERE