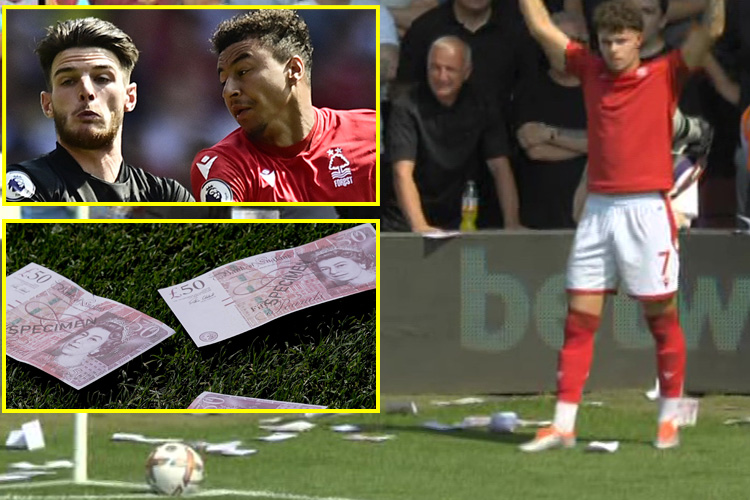 Some West Ham fans are not taking Jesse Lingard’s summer transfer decision very well. A section of Hammers supporters decided to throw fake money at the midfielder after he snubbed a return to the club. Lingard opted for Nottingham Forest this summer instead of West HamGetty Fake money was thrown from some West Ham fans onto the pitch at the City Ground and it littered the area where Neco Williams stoodSky Sports The notes thrown at Lingard by a section of the Hammers fansRex Lingard left Manchester United on a free transfer at the end of last season and had plenty of options. West Ham seemed the most likely destination after he enjoyed a successful loan spell there in the second half of the 2020/21 season. That yielded nine Premier League goals in just 16 games as he helped them into the Europa League places. But instead of heading back to the London Stadium, he decided to join newly-promoted Nottingham Forest. There were accusations from some West Ham fans that it was motivated purely by money, but he hit back at those suggestions. Lingard recently admitted he could have made life changing money with offers from abroad. Most read in Football transfers Man United hold Morata talks, Fofana personal terms 'agreed', De Jong update wow 'The worst possible teammate' - Man United star 'gets away with murder', talkSPORT told fury Ronaldo 'snubs' Man United fans despite McClaren pleas and 'knew bad start was coming' LIVE Brentford v Man United: Reaction as Ronaldo and Co. bottom of the league after mauling tragic Man United should tell Erik ten Hag to 'pack up' after Brentford 'shambles' SHOCKER 'It's annihilation' - Neville stunned as Man United hammered 4-0 in horror show Lingard had a successful loan spell at the Hammers in 2021AFP He lined-up against West Ham in the second game of the Premier League game of the season with new club Forest. And the home supporters taunted Hammers fans with chants of ‘Jesse Lingard, he left because you’re s***’. Fake money was also seen on the ground when Forest had a corner in the area where visiting supporters were, seemingly aimed at Lingard. There was no animosity from West Ham boss David Moyes, who praised the midfielder before the match. Lingard was the focus of attention for Forest vs West HamGetty “He has moved on. Jesse was brilliant for us. Jesse got us into Europe with his goals, he gave us a huge lift when he joined the club and played a huge part of getting us into Europe.  “We acknowledge that and thank him greatly for that, the club made him a really good offer to come and we just couldn’t quite get him. “He’s someone we could have liked, but obviously he chose Nottingham Forest.” Betting Offers Of The Weekend ALL CUSTOMERS: Bet £5 via the talkSPORT EDGE app with Paddy Power and get a £5 free bet – available to all customers* – CLAIM HERE NEW CUSTOMERS: Bet £10 with Bet365, Get £50 in Free Bets* – CLAIM HERE Paddy Power All Customers: Place a £5 Sportsbook Bet through the talkSPORT EDGE app between the 1st and 31st August. Get a £5 free bet on the next Monday after your qualifying bet. T&C’s apply. 18+ Begambleaware.org Bet365: Open account offer. Bet £10 & Get £50 in Free Bets for new customers at bet365. Min deposit requirement. Free Bets are paid as Bet Credits and are available for use upon settlement of qualifying bets. Min odds, bet and payment method exclusions apply. Returns exclude Bet Credits stake. Time limits and T&Cs apply 18+ Begambleaware.org SEE ALL FREE BET OFFERS FOR NEW AND EXISTING CUSTOMERS HERE