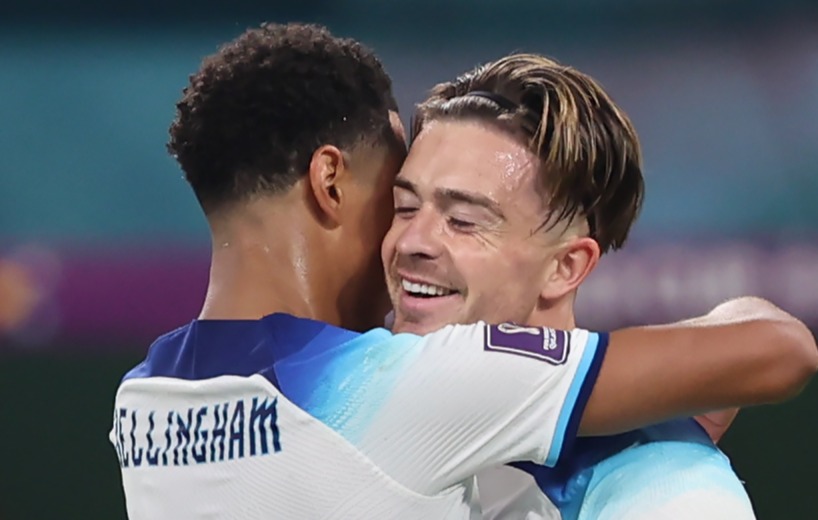 Jack Grealish has revealed that England teammate Jude Bellingham ‘is a lovely kid’ and loves that he also comes from Birmingham. But the ex-Aston Villa captain couldn’t help but crack a Second City derby-themed joke when talking about the teenager’s impact at the 2022 World Cup. Despite their roots, Grealish and Bellingham have been getting on like a house on fireGetty Football history suggests the England stars shouldn’t be friends, given they both came through the ranks of rival clubs Aston Villa and Birmingham City. But despite this, ex-Blues star Bellingham has recently told talkSPORT the former Villa skipper made him feel more than welcome in the England camp, giving him a massive hug when they first saw each other. Despite being just 19-years old, Bellingham has been one of the most important players for England in Qatar – and Grealish revealed he’s full of admiration for his old club’s former rival. “Yeah, no he’s been brilliant,” he said. “I didn’t honestly expect anything else, the way he’s started the season playing for Dortmund. Even in the Champions League he’s been on fire so I didn’t expect anything else. “It’s crazy to think he’s only 19 years old and the way he plays you know he’s so mature. “You know I think we’ve all seen players in the past that have been so good but you can tell that they’re young by the way they’ve played. Bellingham has netted four times in five Champions League games this season for DortmundGetty Most read in Football ron-call Ronaldo's sister says Portugal boss Santos 'humiliated' her benched brother denied Ronaldo responds to Al-Nassr reports as ex-Man United star told future looks bleak hang back Silva runs back onto pitch as Portugal celebrate opening goal against Switzerland exit Ronaldo first down tunnel as Portugal teammates celebrate emphatic World Cup win benched Cristiano Ronaldo dropped for Portugal's last-16 World Cup clash with Switzerland missing Mbappe absent from France training as France prepare for England clash “But he plays like he’s a 25, 30-year-old player that’s being playing at the top for years. He’s got everything honestly, he can defend, he can tackle, he can run, he can dribble, he can score, he can assist. “So you know, fair play to him.” Of course, both players have long since moved on from their first clubs, with Grealish signing for Manchester City in 2021 and Bellingham playing for Borussia Dortmund since 2020. But Grealish has shown that the phrase once a Villan, always a Villan, will always ring true for him, as he joked there is one Blues-related flaw in his England teammate. Bellingham stormed into the Blues first team in 2019/20 but never faced Villa for the senior teamgetty Meanwhile Grealish loved playing in the feisty Second City derbiesgetty “There’s another thing that’s so good about him as well, he’s a really lovely kid you know at heart,” Grealish said. “He’s a fellow Brummy as well. “Just a shame he doesn’t support Aston Villa! That’s the only problem with him.” Both Birmingham-born stars will be hoping to lead England into the semi-finals of the World Cup, with the Three Lions set to face reigning champions France on Saturday – live on talkSPORT. talkSPORT World Cup 2022 Coverage talkSPORT is bringing you wall-to-wall coverage of the 2022 World Cup. We are broadcasting all 64 games in the tournament live, with over 600 hours of coverage across our network. You can tune in to talkSPORT and talkSPORT 2 via our free online streaming service at talkSPORT.com. talkSPORT is widely available across the UK via DAB digital radio and on 1089 or 1053 AM. You can also download the talkSPORT app, or ask your smart speaker to play talkSPORT.