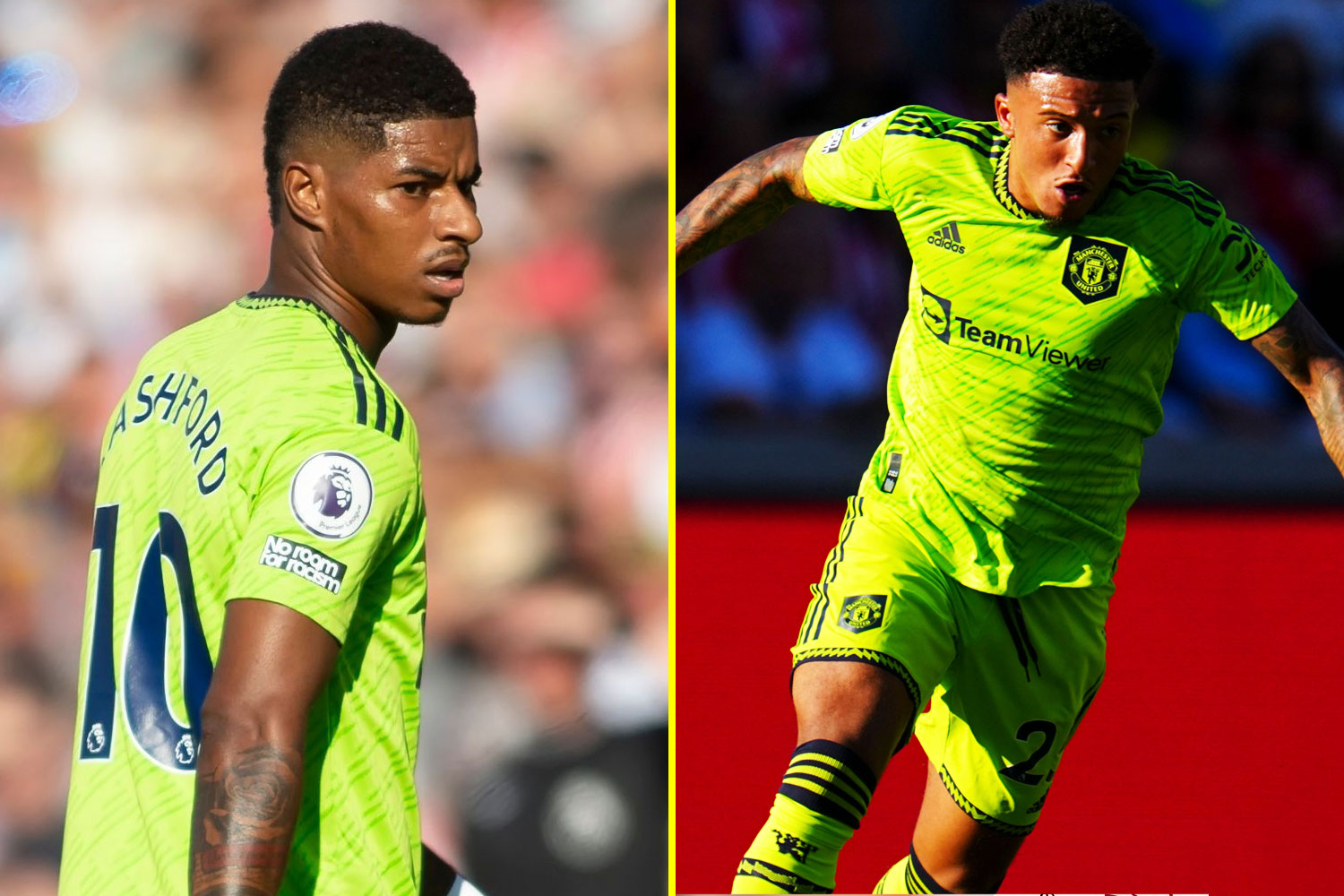 Jadon Sancho and Marcus Rashford deserve plenty of criticism for their performances in a Manchester United shirt. That’s the view of former Chelsea striker Tony Cascarino who was reacting on talkSPORT to the Red Devils’ 4-0 mauling to Brentford. No Man United player came out of the game wellGetty There were little to no positives for Erik ten Hag to take from the defeat, leaving the club rock bottom of the Premier League after two games. Plenty of players have come in for criticism for their performances, not only on Saturday but for how they have played over recent weeks and months. Cascarino singled out the two wide players for particular criticism. He told Weekend Sports Breakfast: “Ten Hag doesn’t want to go after individuals, that’s exactly the thing you should be doing. “I would certainly start with the two wide boys. Sancho and Rashford. “Two young lads with loads of ability. Sancho has had an easy ride since he’s gone to Manchester United because Rashford has had much more difficulties on and off the field. Most read in Football fury Ronaldo 'snubs' Man United fans despite McClaren pleas and 'knew bad start was coming' LIVE Brentford v Man United: Reaction as Ronaldo and Co. bottom of the league after mauling tragic Man United should tell Erik ten Hag to 'pack up' after Brentford 'shambles' SHOCKER 'It's annihilation' - Neville stunned as Man United hammered 4-0 in horror show JOKER Carragher trolls Neville by changing profile picture during Brentford vs Man United PAIN 'I'm going off grid' - Ferdinand reacts to Man United going 4-0 down at Brentford Sancho has struggled since he joined United from Dortmund last summerGetty “Sancho has been so poor. I only ever see him getting to the byline, I don’t see him running at full-backs and taking them on. “Rashford was up against Hickey, a young lad of 20. He had his first game in a Brentford shirt last week, he’s playing against a young 20-year-old full-back and hasn’t even attempted to go past him. “He got caught early on in the game where he goes on his left side, gets caught and then he gives up and doesn’t try it again.  “So if it doesn’t happen for you then you won’t try it again?” Cascarino also urged Rashford to move from Old Trafford amid transfer links to Paris Saint-Germain this summer. Rashford has been linked with a move away from Man United this summer, but they are unlikely to sellGetty He added: “What would the fee be? He’s in the final year of his contract, is it something United can turn down? “I think he needs to move away from Manchester United. I don’t believe the fans are totally behind him.  “Of course they want him to do well, he’s a Manchester boy and want to see him to do well. “The vibe is bad at Man United and can he play in that toxic atmosphere that is at the football club.” Betting Offers Of The Weekend ALL CUSTOMERS: Bet £5 via the talkSPORT EDGE app with Paddy Power and get a £5 free bet – available to all customers* – CLAIM HERE NEW CUSTOMERS: Bet £10 with Bet365, Get £50 in Free Bets* – CLAIM HERE Paddy Power All Customers: Place a £5 Sportsbook Bet through the talkSPORT EDGE app between the 1st and 31st August. Get a £5 free bet on the next Monday after your qualifying bet. T&C’s apply. 18+ Begambleaware.org Bet365: Open account offer. Bet £10 & Get £50 in Free Bets for new customers at bet365. Min deposit requirement. Free Bets are paid as Bet Credits and are available for use upon settlement of qualifying bets. Min odds, bet and payment method exclusions apply. Returns exclude Bet Credits stake. Time limits and T&Cs apply 18+ Begambleaware.org SEE ALL FREE BET OFFERS FOR NEW AND EXISTING CUSTOMERS HERE