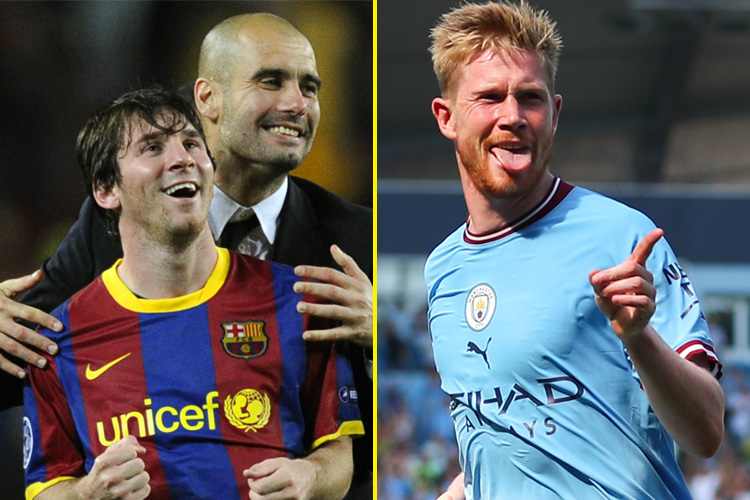 Man City star Kevin De Bruyne is playing like Lionel Messi did in his prime for Barcelona under Pep Guardiola, talkSPORT has been told. The Belgian netted a stunning strike in a 4-0 victory over Bournemouth, whipping the ball into the bottom corner with the outside of his right boot. De Bruyne grabbed a goal and an assist against BournemouthGetty De Bruyne’s stunning strike helped City on their way to victoryGetty His effortless display and creativity in the match helped the champions put the Cherries to the sword. The 31-year-old also set-up Phil Foden’s goal to make the scoreline 3-0 at the Etihad Stadium. And as he continues to both score and create at an elite level, former Premier League striker Tony Cascarino compared him to Messi. “De Bruyne was De Bruyne at his best,” said Cascarino. “His goal was terrific. I could have selected his goal for goal of the weekend. “The defender maybe needs to get closer to him and don’t let him have half a yard to get his head up and try and pick a spot, which he does with the outside of his boot. “City are a team that’s going to pull you to shreds.” Messi and Guardiola enjoyed remarkable success at Barcelona together and De Bruyne has now been compared to the football icongetty Most read in Football news Man United's Ronaldo stance unchanged, Chelsea make Gordon offer, Barca set Auba price LIVE Chelsea 2 Tottenham 2 LIVE reaction: Tuchel and Conte sent off after heated clash heated Conte and Tuchel sent off for clashes as Spurs and Chelsea play out fiery draw update Man United refute claim they 'may terminate' Ronaldo deal if mood doesn't improve punished Ten Hag cancels stars' day off as ex-Chelsea man 'laughed' at Eriksen decision upset West Ham fans throw fake money at Jesse Lingard after snubbed summer transfer He continued: “Kevin De Bruyne is now the Lionel Messi of what Pep [Guardiola] had at Barcelona. “He will just take the ball everywhere and use it. He’s pivotal to them.” Argentine sensation Messi was vital for Barcelona during their incredible spell under current City boss Guardiola. Together the pair won three LaLiga titles and two Champions Leagues, and a further nine domestic, european, and intercontinental trophies. Offer Of The Day ALL CUSTOMERS: Bet £5 via the talkSPORT EDGE app with Paddy Power and get a £5 free bet – available to all customers* – CLAIM HERE NEW CUSTOMERS: Bet £10 with Bet365, Get £50 in Free Bets* – CLAIM HERE Paddy Power All Customers: Place a £5 Sportsbook Bet through the talkSPORT EDGE app between the 1st and 31st August. Get a £5 free bet on the next Monday after your qualifying bet. T&C’s apply. 18+ Begambleaware.org Bet365: Open account offer. Bet £10 & Get £50 in Free Bets for new customers at bet365. Min deposit requirement. Free Bets are paid as Bet Credits and are available for use upon settlement of qualifying bets. Min odds, bet and payment method exclusions apply. Returns exclude Bet Credits stake. Time limits and T&Cs apply 18+ Begambleaware.org SEE ALL FREE BET OFFERS FOR NEW AND EXISTING CUSTOMERS HERE