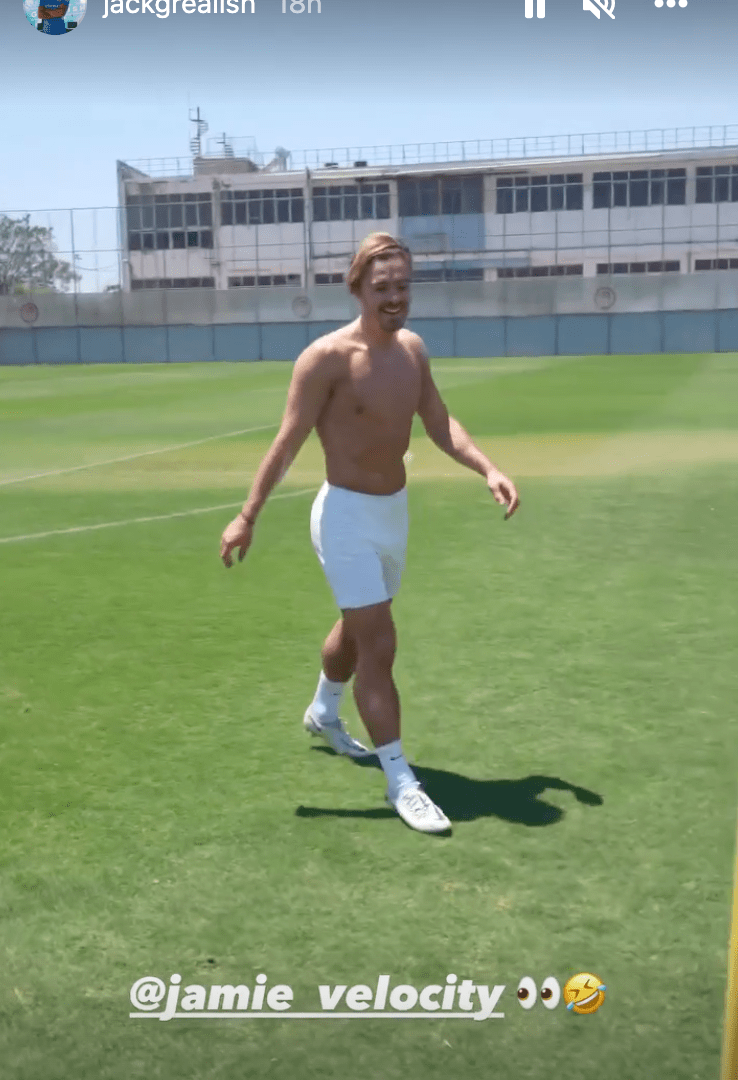 Manchester City star Jack Grealish has continued preparations for the new season by honing his skills while on holiday. Grealish, 26, posted a story on his Instagram account where he was seen working hard in the Athens heat. Grealish could been carrying out shooting drillsInstagram/@jackgrealish The 26-year-old was in fine shape ahead of pre-seasonInstagram/@jackgrealish The England international had previously been carrying out several training drills on the Island of Santorini. Prior to this, Grealish had attended former Aston Villa teammate Conor Hourihane’s wedding, before heading to the Greek capital. His hard work on the training pitch is clearly paying off, with the forward in fine shape, showing his broad physique, ahead of his return to Manchester. Grealish had plenty of footballs out and was captured passing to a bench, before firing into an empty net, as he gets his shooting skills in up to speed. City will start pre-season in less than a week and it seems as though their star was keen to get ahead of the game. Manager Pep Guardiola will be happy to see the England star going through his paces, after he was previously pictured having plenty of fun on holiday. Most read in Football news Chelsea discuss Ronaldo and Neymar bids with Sterling close, Eriksen to Man United DOUBLE DEAL Leeds to splash out £40m-plus on Phillips and Raphinha replacements ARREST Premier League international footballer arrested on suspicion of rape NEW LOOK Eriksen in, Dybala replaces Ronaldo and Arsenal lose out in new Man United XI PROGRESS Ferguson's message to Everton fans as he leaves club to pursue managerial career moves Man United in contact over Dybala as striker search heats up, Ronaldo future in doubt Grealish had previously attended Hourihane’s wedding in SantoriniInstagram/@@Sasha_rebecca It was certainly a change of scenery for the player, who had been relaxing in Las Vegas and Ibiza following the end of last season. Grealish’s holiday destination appeared to split the nation, drawing criticism from some, while others claimed there was nothing wrong with a young bloke letting his famous hair down. He had also attended Harry Maguire’s £500,000 French wedding in at the exclusive 13th Century Chateau de Varennes in Burgundy. Grealish, a £100million signing last summer, now looks as though he has put his partying behind him, as he gets down to business and looks to impress for both club and country next season. Offers Of The Day Bet365 – Bet £10, Get £50 In Free Bets* – CLAIM HERE Open account offer. Bet £10 & Get £50 in Free Bets for new customers at bet365. Min deposit requirement. Free Bets are paid as Bet Credits and are available for use upon settlement of qualifying bets. Min odds, bet and payment method exclusions apply. Returns exclude Bet Credits stake. Time limits and T&Cs apply 18+ Begambleaware.org SEE MORE FREE BET OFFERS HERE