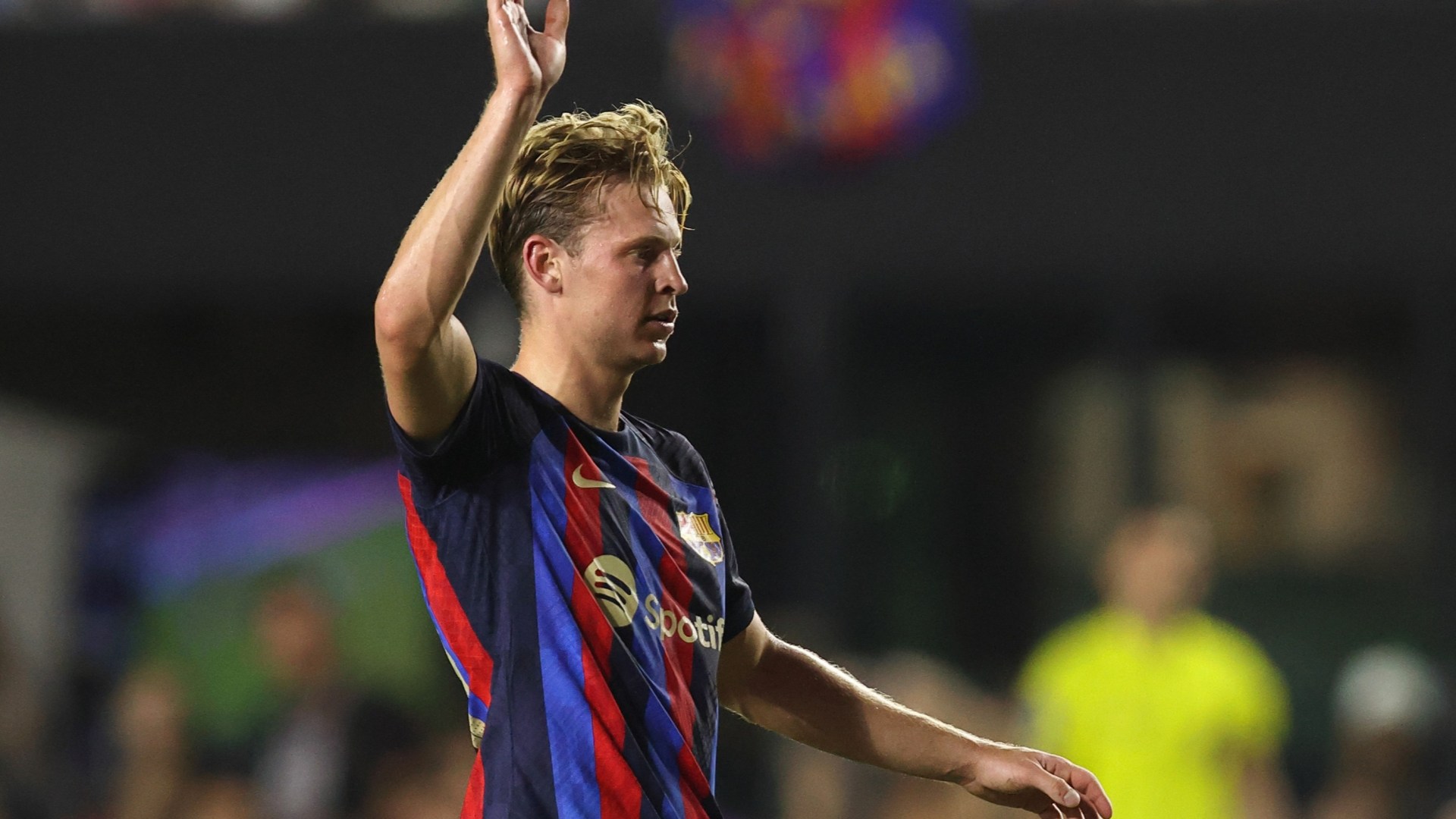 Erik ten Hag has insisted he has confidence in Manchester United’s squad despite the lack of new arrivals. The Premier League side has completed deals for Lisandro Martinez, Tyrell Malacia and Christian Eriksen so far this summer, but remain in the market for further additions. Ten Hag was quizzed on United’s summer plansGetty Ten Hag was also in jovial mood regarding the club’s pursuit of De JongGetty As well as resolving the situation around Cristiano Ronaldo’s future, a deal to sign Frenkie de Jong remains the priority for the Red Devils as they look to add crucial quality in midfield. Striking a deal with Barcelona is proving to be increasingly difficult, but while jokingly acknowledging the club’s interest in the Dutch star, Ten Hag is adamant that they won’t be signing further players for the sake of it. Speaking in his press conference about De Jong when the player was brought up, he laughed: “We want Frenkie? I didn’t know. “It’s about the right players and I cannot comment on a player under contract at another club. “When you work with the current squad and develop players in your current squad, in this moment we have players in that position and perform really well. “It would be a good situation (to have concluded all of their business) but I have a squad and I’m happy with the current squad. Most read in Football NEWS Tuchel confirms Cucurella move, Klopp rules out more Liverpool deals, De Jong latest confirmed Premier League introduces seven new rules including changes to subs and penalties line-up Arsenal to hand out three PL debuts and pick unorthodox right-back against Palace back on Chelsea agree deal in excess of £60m to sign Brighton defender Marc Cucurella SPREE Boehly treating Chelsea 'like Football Manager' says Neville who makes Woodward claim MAX POWER West Ham set to beat Newcastle and Everton to in-demand Championship ace Ten Hag won’t be signing players for the sake of it, he saysGetty “We make good progress, I’m happy with the signings until now. You don’t need any player, you need the right player, that’s what we’re working for.” Asked if they’ll move onto other targets, ten Hag said: “If it’s not the right player, no. We need the right players.” The Premier League is back and talkSPORT has it covered, with games on Friday, Saturday and Monday, beginning with Crystal Palace vs Arsenal on 5 August Offers Of The Weekend Sky Bet: 50/1 for a shot on target in Crystal Palace v Arsenal* – CLAIM HERE Paddy Power: Bet £5 via the talkSPORT EDGE app with Paddy Power and get a £5 free bet – available to all customers* – CLAIM HERE Sky Bet: Over 2.5 goals in each of the 6 Premier League matches on Sat 6th Aug (was 33/1) @ 40/1 – CLAIM HERE Sky Bet: NEW CUSTOMERS ONLY. MIN/MAX STAKE £1. FREE BETS CREDITED ON TOP OF WINNINGS. FREE BETS CREDITED WITHIN 72 HOURS. 5 X £10 BET TOKEN. FREE BET STAKES NOT INCLUDED IN RETURNS. FREE BETS CANNOT BE USED ON VIRTUALS. FREE BETS ARE NON WITHDRAWABLE. NO FREE BET EXPIRY. ELIGIBILITY RESTRICTIONS AND FURTHER T&CS APPLY. Paddy Power: Place a £5 Sportsbook Bet through the talkSPORT EDGE app between the 1st and 31st August. Get a £5 free bet on the next Monday after your qualifying bet. T&C’s apply. 18+ Begambleaware.org SEE MORE FREE BET OFFERS HERE