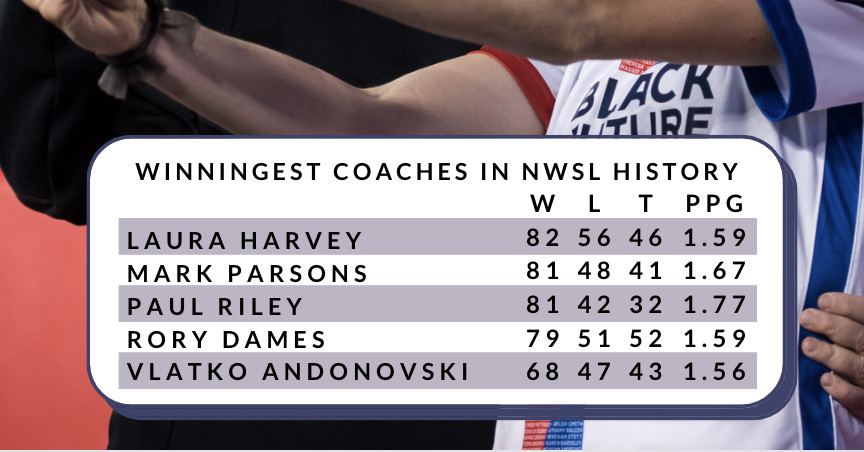 MikeRussellFoto / Sounder at Heart Megan Rapinoe and Rose Lavelle reflect on Harvey’s 82 regular-season wins. With their 4-1 home win over Gotham FC on Sunday, OL Reign not only put themselves in a great position for their playoff push, but head coach Laura Harvey made history in the process. The game marked her 82nd regular-season win in the NWSL, putting Harvey at the top of the league for all-time regular-season wins. Megan Rapinoe and Rose Lavelle were quick to honor this milestone and speak to Harvey’s legacy in their post-match press conference. In fact, when asked at the start about her overall thoughts on the match, Rapinoe began with a nod to Harvey’s new record. “First of all, congrats to Harvs for becoming the winningest coach in NWSL history. Obviously, just such a huge accomplishment for someone that I love so dearly, so I’m so happy for her.” Lavelle, who joined the Reign last year and is playing some of her best soccer this season, praised Harvey’s balance of tactical strategy with her player-first coaching style. “I think she’s kind of a tactical mastermind. I’ve learned so much from her and grown so much as a player. And then just her as a person. She’s amazing. She just brings so much fun and joy to the game for us. And when you get to this level, sometimes you can lose sight of that. So to have a coach that you can learn from but also still keep the game fun is incredible, and I think there’s no better person for this record.” Rapinoe echoed Lavelle’s comments while noting how much she’s grown as a player alongside Harvey. Rapinoe was 27 when she joined the Reign alongside Harvey for their inaugural season in 2013. Rapinoe has gone on to win two World Cups with the U.S. and two NWSL shields since then, and credits a lot of her growth to Harvey. “Obviously, I’ve grown up playing with Laura, I feel like. I feel very lucky to be in this system with her. I feel like I am part of the system and the system is part of me, and it just literally feels like air sometimes playing.” It’s not just the wins that Rapinoe points to, either. If you talk to coaches around the league, they’ll talk about how much Harvey changed the league for the better with the style of soccer she liked to play — possession-based, creative, with a tactical press to disrupt opponents. “I think just in terms of the NWSL, you can’t talk about the NWSL without talking about Laura Harvey, without talking about the teams that she’s coached, the players that she’s had, the style that we’ve played. The league is so much better with her coaching, but also just her influence on things — not just style-wise, but off the field, everything.” “I’m just so delighted for her,” Rapinoe concludes. “She really deserves all of this, and so much more.”

Realio’s Ratings: Another draw when a win was required

A sum greater than their parts: Defiance advance to West final

Cristian Roldan happy to be back and pain-free