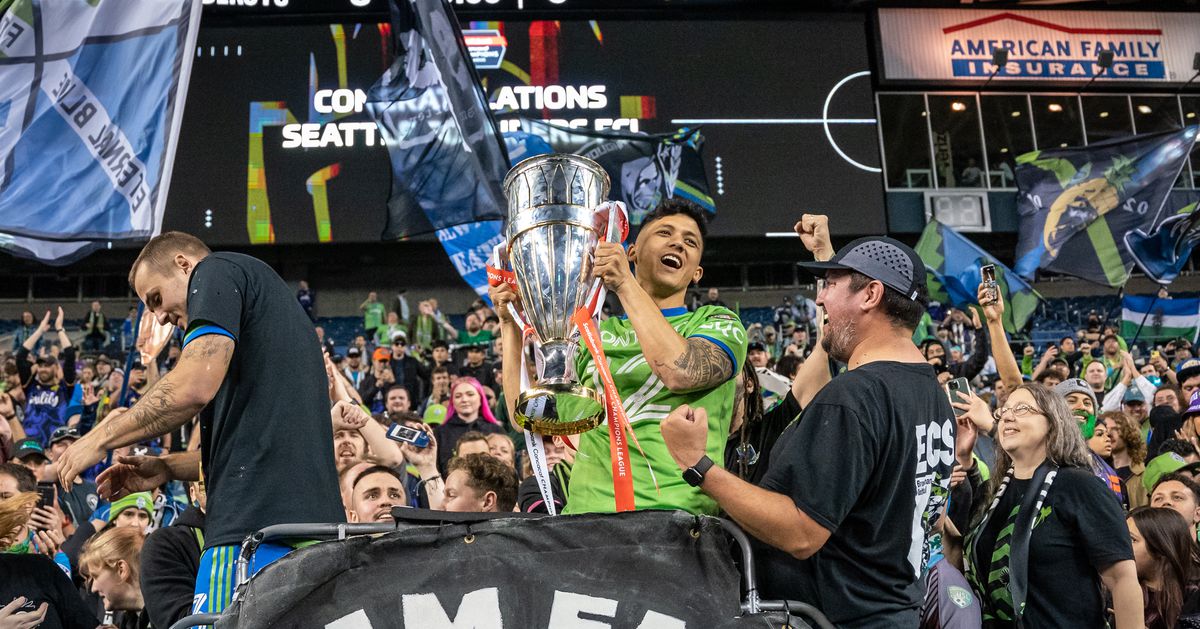 MLS seems to be worried about us doing a bit too much of this. | Max Aquino / Sounder at Heart Sounders currently slated to only wear the patch on July 9, but it is available for fans to apply to their jerseys. Somewhat quietly and with little fanfare, the Pro Shop at Lumen Field recently started offering fans the opportunity to add a Concacaf Champions League winner’s patch to current jerseys. Sounder at Heart has confirmed that the Sounders will be wearing these patches for the July 9 match against the Portland Timbers as part of a larger CCL title celebration, which will also include the raising of the championship banner that will hang in the Lumen Field rafters. The patch is golden and will be affixed in the middle of the chest, between the adidas logo and team badge. The Pro Shop has said they will add it to either of the current jerseys for a cost of $12, as supplies last. pic.twitter.com/z3IwuZBUAZ— Miguel (@styxmig) June 23, 2022 Somewhat curiously, though, the current plan is for the Sounders to only wear it on the field once. The only way they’d wear the patch again is if they compete in next year’s CCL, despite the Sounders requesting permission to wear it more often. “We spent a lot of time talking to the team side and what their approach was, this was driven by them,” said Taylor Graham, the Sounders Chief Revenue & Marketing Officer. “The team’s preference was to wear it for every single MLS match from July 9 on, and that’s not the outcome we got.” Exactly why the Sounders weren’t allowed to wear the CCL patch for more than one game was not immediately clear. After several emails to MLS officials seeking comment and clarification, no answer was provided. In researching what was the most appropriate way to celebrate their historic victory, Sounders officials discovered that there is no world standard for this sort of accomplishment. In Europe, for instance, their Champions League winner wears an arm patch throughout the following season, but only when competing in the tournament. Notably, the UCL winner is guaranteed a spot in the following tournament, ensuring the team has an opportunity to actually wear the patch, while the CCL winner is given no such guarantee. The chest area has been reserved for a patch honoring the winner of the Club World Cup, which Chelsea wore in every competition in which they competed during the 2021-22 campaign. In South America, however, the winners of the Copa Libertadores and Copa Sudamericana both wear their patches in all competitions the following season. In Mexico, there is no formal policy, but teams like Monterrey have started to put stars beneath their crest to signify continental championships. Somewhat complicating the situation in MLS is that the league had not yet created a policy for celebrating a CCL title, in part because it had never been an issue before. There has been an evolving way to recognize MLS Cup winners, though. From 2006-2011, MLS winners wore a “scudetto” patch on their arm to signify their status as reigning league champions and then a permanent star was placed over the crest a year after. The arm patch stopped being worn in 2012. In 2016, what is effectively the basis for the current system was put into place, with a golden star on the jersey of the reigning winner, silver stars to signify past championships and a “mega” star to signify five titles. In 2019, that changed again with the “mega” star being dropped. In 2020, a version of the scudetto returned, with the winners getting an altered MLS logo patch that has an MLS Cup inside it. At the time, it was widely suggested that MLS should similarly honor the U.S. Open Cup, Supporters’ Shield and potential CCL winners in a similar way, but that apparently didn’t gain much traction in the league office for unknown reasons. With space so limited on the jersey, this would have seemed an elegant solution. Since MLS officials declined to make themselves available to explain their reasoning, it can only be speculated as to why they are reluctant to celebrate CCL winners in a more robust way. MLS Commissioner Don Garber himself called the CCL final “the biggest game in the history of the league”, but apparently doesn’t see any value in allowing the Sounders to publicly celebrate the achievement in every game. It’s a head-scratching decision at the very least.

Major Link Soccer: Luchi Gonzalez to be next Earthquakes manager