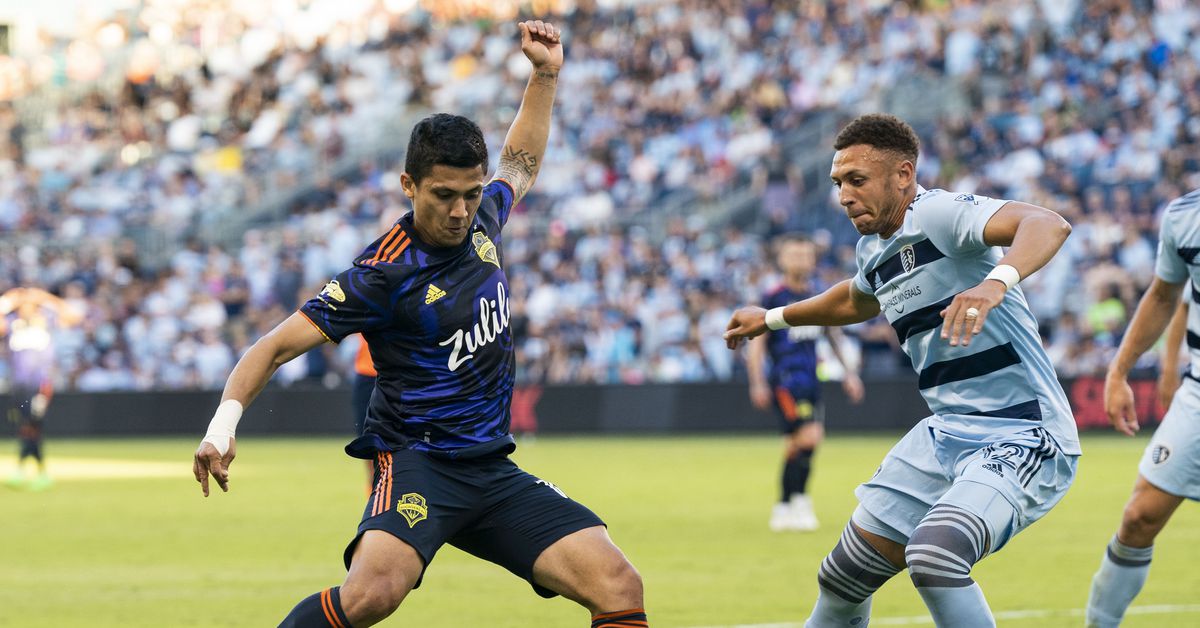 Jay Biggerstaff-USA TODAY Sports Sounders fall 1-0 on the road to Sporting KC, ending the playoff streak. The Seattle Sounders traveled to Kansas with their playoff hopes hanging in the balance as they faced Sporting Kansas City. Eliminated from playoff contention, SKC weren’t without motivation. Peter Vermes has had his side playing some quality football over the previous nine games, and with the chance to lock what has oddly become something of a bitter rival into the Elimination Cellar with them, the hosts were playing like a trophy was within their grasp. From the outset, SKC had Seattle under constant pressure. Stefan Frei was forced into three impressive saves within the first 17 minutes before Seattle managed their first attempt. The Sounders did work their way back into the game, beginning to hold their own and looking like they might go into halftime level. They saw that plan undone in the 41st minute when William Agada got into the box with yards of space all around him to receive a ball from Daniel Salloi, which he sent beyond Frei. Seattle created chances as they tried to salvage the season, but as has so often been the case in the last few months, nothing was falling their way. The Sounders will now miss the playoffs for the first time in their MLS history, having made it to the postseason 13 times since joining the league in 2009. They’ll play next in Seattle on Sunday, October 9 at 2 PM PST against the San Jose Earthquakes to close out the season. Key moments 6’ — Daniel Salloi gets a shot off after Danny Leyva’s attempted interception falls to him, but Stefan Frei saves it relatively easily. 13’ — Salloi forces another save from Frei, this time pulling up from about 20 yards out and aiming for the bottom far corner, but Frei knocks it away for a corner. 17’ — Another save from Frei as he keeps William Agada from opening up the score with a diving save. Nouhou blocks the follow-up shot from Johnny Russell on the rebound. 25’ — Seattle’s first real look comes as Cristian Roldan makes a late run into the box onto a cutback from Nico Lodeiro, but the shot is blocked out for a corner. 29’ — Stefan Frei double-save! Frei moves to his left to deny a point-blank attempt, then makes himself big to keep the second attempt out as well! 41’ — William Agada opens the scoring. A poor clearance from Yeimar sets up a situation with Agada all alone in the box, and he beats Frei. 1-0 SKC 54’ — Fredy Montero nearly levels the score after great play from Josh Atencio and Nico Lodeiro, but the shot from behind the defense is just wide. 69’ — Montero goes close again. Cristian Roldan plays him into space down the right, and Montero moves into the box and lets loose a looping attempt that’s tipped over the bar. 90’ — Leo Chú plays a ball across the box that finds Ethan Dobbelaere, but Dobbelaere’s attempt to find an empty net is blocked on the line by a defender on the ground. Quick thoughts Stefan Frei forever: It’s been a weird year. That’s probably true for everyone, in every aspect when it comes to the Sounders. Stefan Frei isn’t immune from that. Outside of his incredible performance against New York City FC in CCL, Frei hadn’t really seemed to have as many signature moments as we’ve come to expect. Against SKC, with the season on the line, though, Frei was as good as ever. His 10 saves were his highest total in a game in just over three years, the last time coming on September 29, 2019 against San Jose. More than a few of those were standout plays, deserving of any highlight reel. Everything ends: The season has been full of firsts and streaks being ended. The biggest, arguably, was the first CCL title for an MLS team. The second, though, is the first season ending before the playoffs. A 13-season playoff streak ending was one of many impressive streaks to die in 2022. But nothing lasts forever, no active endeavor can exist eternally. The best we can hope for is to embark on endeavors that leave a mark on history, and that what we’ve created can outlive us. What happens next? There will be, undoubtedly, deep and thorough conversations about what went wrong, what could have been done differently, and what should be done going forward once we actually reach the off-season. We can look back at the team that won CCL and see that if everyone can get back to full fitness, then this team has everything necessary of a champion. A team capable of asserting its place as the best on the continent. But after forgoing any moves in the Summer, this season’s second half has shown that the team needs to be better prepared for the potential that not everyone will be 100%. Something’s got to change. Did you see that?!? STEFFFFF pic.twitter.com/sIJd9tDnq7— Seattle Sounders FC (@SoundersFC) October 2, 2022 He said what?!? Lodeiro had some comments about things going wrong with club: "There are many mistakes that happened at the player level, the coaches level and the club level. The CCL covered up many of these mistakes, but what happened will hopefully help us recover from these things."— Jeremiah Oshan (@JeremiahOshan) October 2, 2022 One stat to tell the tale 10 — Stefan Frei was forced to make 10 saves as Seattle settled for a 1-0 road loss.