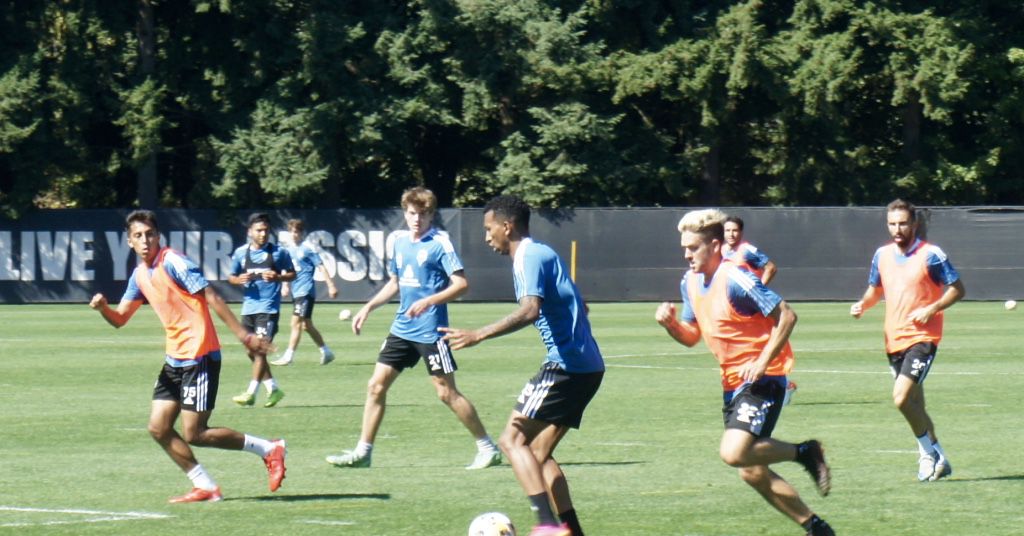 Sounders training notebook: Back to work

Miki Turner Sounders prepare for Saturday’s match against Minnesota United. TUKWILA, Wash. — The Seattle Sounders returned to training at Starfire on Wednesday ahead of their weekend matchup against Minnesota United. It was still a bit of a skeleton crew, however, with a substantial number of their starters still away on international duty. Head coach Brian Schmetzer said he will be an interested observer in the remaining matches his players feature in, as that will play a large role in who might be available Saturday afternoon. Four of the five Sounders who were called away will potentially be in action over the next two days, and the minutes played and travel logistics could prevent all of them from appearing. “It was good to get a couple of days’ break, mental recovery as well as physical recovery,” Schmetzer said. “The challenge with the amount of games is always the same: What condition are the internationals going to come back in. Hopefully no injuries tonight or tomorrow night. Let’s keep our fingers crossed.” As the Sounders await the results of the remaining international matches, Schmetzer said the depth he had to use during the Sounders injury crisis will be very helpful should one or more of the internationals be unavailable. “We’re watching Raul [Ruidiaz], see what happens there. We’ve got Will [Bruin] we’ve got Fredy [Montero], two proven goal-scorers. How do we incorporate Cristian back, because his game’s Wednesday and if he doesn’t play is he fit to go? But I have confidence in my team, that we can score.” Additionally, Stefan Frei appears to be in the final stages of his recovery, fully participating in training with what appeared to be the first team. Schmetzer said Frei has cleared all injury protocols and is optimistic fans will see him this weekend. “Stef, provided nothing further bad happens in training, will be available for selection, so there’s a very good chance he’ll be on the field,” Schmetzer said. The news was a bit less positive regarding the status of Nouhou, who left training Wednesday with what appeared to be an aggravation of his injury, though it didn’t appear to be serious. Still, the potential setback could be a complication for Schmetzer if the Cameroon international is unavailable for selection, particularly with Xavier Arreaga potentially unavailable and AB Cissoko’s status up in the air after he left early from the Tacoma Defiance game on Saturday. “We’re trying to push him through,” Schmetzer said about Nouhou. “He still gets some random pain in that area, but the docs think he is okay. We just need to get him over that last [hurdle]. Maybe it’s mental. I’m still hopeful that he’s involved in the game.” One recent addition who appears to be on schedule is Léo Chú, who has been participating in all training sessions since his arrival and appears to be integrating well. Chú was fully involved in training again on Wednesday, and displayed some flashy dribbling and scored a nice headed goal, which caught Schmetzer’s attention. “He’s looked pretty good,” Schmetzer said. “He continues to incorporate himself into the team. He understands a little bit now, we had some film this morning. We’re working with him on an individual basis just to get him up to speed.” Notes Schmetzer expressed some solidarity for his former MLS colleague and current United States men’s national team coach Gregg Berhalter, who dismissed Weston McKennie from the team for breaking Covid protocol. The USMNT coach has come under criticism for two lackluster performances, including a draw at home to Canada. “As far as the discipline is concerned, that’s a no-brainer for me,” Schmetzer said. “This is a seven-day window, where there’s rules in place, and I would expect that our guys follow the rules that are laid out.” Schmetzer didn’t provide an update on Cissoko, who sustained what appeared to be a scary injury in Tacoma Defiance’s match against Phoenix Rising. However, he was jogging off to the side Wednesday at training and did not appear to be the worse for wear. though he appears unlikely to feature on the weekend.