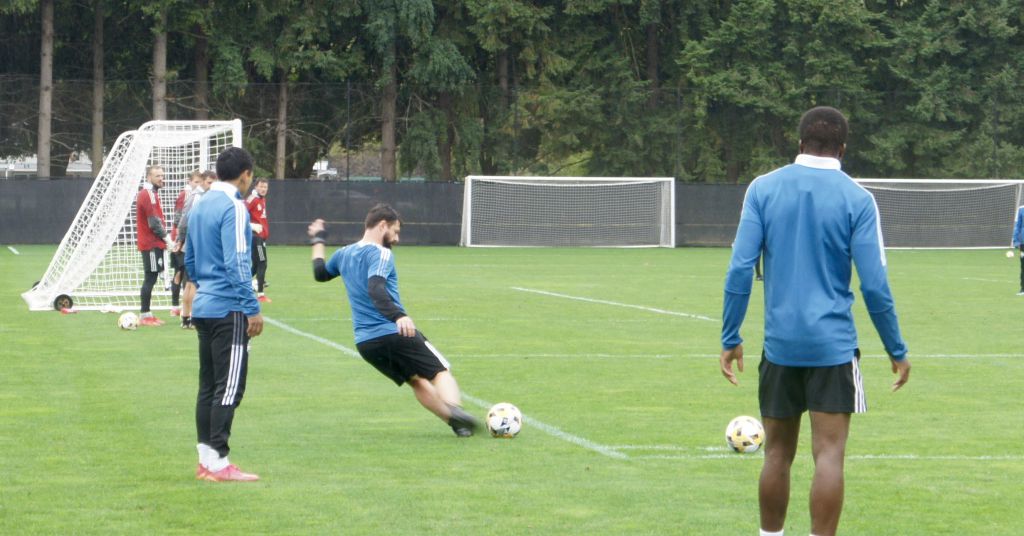 Sounders training notebook: Focusing on the task at hand

It was a train and travel day for the Sounders, as they prepare to take on Real Salt Lake Saturday at Rio Tinto. | Miki Turner Sounders doing their best to put RSL front of mind. TUKWILA — It was a light training session Friday at Starfire for the Seattle Sounders, and for good reason. Coming off Tuesday’s emotional last-minute winner against Santos Laguna in the Leagues Cup semifinal, the Sounders were on a plane headed for Salt Lake City after practice, as they look to continue their good run of form in MLS play Saturday. Still, much of the talk was of Tuesday’s heroics, and the looming trip to Las Vegas next week. While the Sounders said the right things about focusing on their next opponent, they conceded that the Leagues Cup final against Léon was lurking in the background. “It’s obviously amazing to be involved in a final and hopefully win a trophy,” Brad Smith said. “We’re looking forward to each game but especially that one. It’s going to be a great match.” Smith said the emotion of the ending of the game was especially memorable, but that the team knows they have to focus on Real Salt Lake on Saturday. “Nothing better than a 90-minute winner to send us to a final,” Smith said. “But that’s not the next game. We got RSL tomorrow, so first we look forward to that and then we focus on the Vegas game.” Head coach Brian Schmetzer’s job, of course, is to get his players to focus on the opponent in front of them, granting that the glitz and glamour of a final in Vegas was hard to ignore. “It’s in their subconscious, and I can use whatever tricks to get them to believe this game is the most important,” Schmetzer said. “They have to believe it for themselves. They’re the ones that have to do the work and prepare for a tough team away from home, a place we haven’t had many good results over the years.” Even though the Sounders have had limited success against Real Salt Lake on the road — going 0-8-2 since 2011— they will be on one day less rest than the Sounders and are playing for an interim head coach, with former manager Freddy Juarez having joined the Sounders staff a few weeks ago. That could be where the Sounders use their increased depth and success on the road to their advantage. “They have one day less rest, [so] can we get on top of them early,” Schmetzer said. “He’s [Pablo Mastroeni] got to rotate some guys. I think the team understands how we want to play, so it’s just a matter of getting them to play to our standard without the distractions.” The Sounders are at close to full health, meaning they should be able to rotate their squad and field a competitive lineup Saturday, with an eye towards the final next Wednesday. There was a notable exception to that, as Nicolas Lodeiro was again absent from training after missing the Leagues Cup semifinal match. Schmetzer termed the absence “precautionary,” as Lodiero continues to work his way back to full fitness from knee surgery. “We gotta make sure he’s in for the long haul,” Schmetzer said. Having Lodeiro healthy long-term will be especially important, given that the Sounders are just two games into a stretch in which they’ll play seven times in a little over three weeks. It’s also possible that Jordan Morris’ return could soon be on the horizon. Schmetzer said he hopes to have a more specific timeline on when Morris might return. Morris was again present at training and he continues to increase his training workload in hopes of a return this season after ACL surgery. “He’s on a medical timeline, he’s got to get through [a certain] amount of training sessions,” Schmetzer said. “He’s getting closer.” For the time being, the Sounders will continue to make do with the squad they have. Which it turns out, continues to be very, very good. “The competitive spirit is what drives this club and this franchise to be successful,” Schmetzer said. “They’re in good spirits, but they don’t like losing, which is something I appreciate. We’ve had a bunch of adversity this year. We’re continuing to do what we can to win games and put ourselves as high up in the table as we can, starting with Saturday.”

Five thoughts about Sounders’ failure to launch in Houston