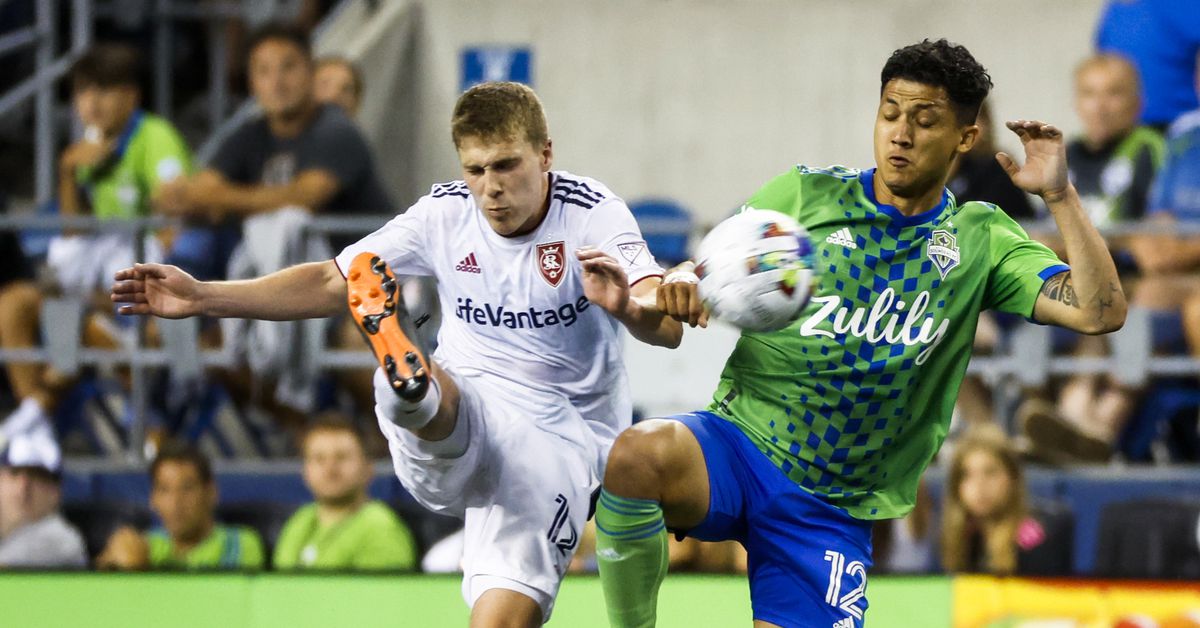 Joe Nicholson-USA TODAY Sports “You know, we need to figure out a way to score goals.” - Schmetzer Needing a win badly, the Seattle Sounders instead repeated an all-too-familiar theme of conceding first and struggling from there. They did appear to get the initial goal, but an offside call nullified it and eventually found an equalizer, only to be undone by a mistake about a minute later. MATCH SUMMARY Seattle Sounders FC 1 – Real Salt Lake 2 Sunday, August 14, 2022 Venue: Lumen Field Referee: Tim Ford Assistants: Chris Wattam, Brian Poeschel Fourth Official: Michael Radchuk VAR: Edvin Jurisevic Attendance: 33,093 Weather: 75 degrees and sunny SCORING SUMMARY RSL – Sergio Córdova 32’ SEA – Albert Rusnák (Nico Lodeiro, Danny Leyva) 62’ RSL – Andrew Brody (Jefferson Savarino) 64’ MISCONDUCT SUMMARY SEA – Yeimar Gómez Andrade (caution) 59’ RSL – Maikel Chang (caution) 66’ SEA – Cristian Roldan (caution) 70’ RSL – Pablo Ruiz (caution) 90’ LINEUPS & STATS Seattle Sounders FC – Stefan Frei; Alex Roldan (Léo Chú 87’), Yeimar Gómez Andrade (Jimmy Medranda 77’), Xavier Arreaga, Nouhou; Danny Leyva (Will Bruin 65’), Albert Rusnák; Cristian Roldan (Kelyn Rowe 77’), Nico Lodeiro, Jordan Morris; Raúl Ruidíaz (Fredy Montero 65’) Substitutes not used: Stefan Cleveland, Jackson Ragen, Josh Atencio, Dylan Teves Total shots: 15 Shots on goal: 3 Fouls: 7 Offside: 3 Corner-kicks: 7 Saves: 2 Real Salt Lake – Zac MacMath; Andrew Brody, Marcelo Silva, Justen Glad, Aaron Herrera; Pablo Ruiz, Jasper Löffelsend (Scott Caldwell 46’); Maikel Chang (Bode Hidalgo 86’), Sergio Córdova (Rubio Rubín 70’), Jefferson Savarino (Julio Benitez 86’); Justin Meram (Erik Holt 59’) Substitutes not used: Nick Besler, Tomás Gómez, Johan Kappelhof, Diego Luna Total shots: 8 Shots on goal: 4 Fouls: 10 Offside: 1 Corner-kicks: 0 Saves: 1 FotMob.com POST-MATCH QUOTES: SEATTLE SOUNDERS FC 1 – REAL SALT LAKE 2 SOUNDERS FC HEAD COACH BRIAN SCHMETZER On the message behind today’s loss against Real Salt Lake: “The message is to win your home games. It’s hard to win on the road in MLS so we can’t wait until there’s a couple of hard games coming up. So, this was a critical moment where we could have pushed ourselves into a better position and then we talk about a couple of tough games. So, obviously the message in there was very short: just make sure you get the physical recovery that will be needed for the Galaxy and then we’ll watch the film and try to get better and it’s not just the goals that we took but also the attacking movements. You know, we need to figure out a way to score goals.” SOUNDERS FC MIDFIELDER KELYN ROWE On the feeling on the loss: “It’s always tough, this is an important part of the season and these next few games, making sure we are pushing toward the end of the year on a positive note. You want the momentum now. But you know, you’re going to have some hiccups, I think it was very good from us, we created a lot of chances in the end. They were really packing it in, they got a few fortunate touches that just put the ball away from us or just put the ball into their favor. It’s obviously unfortunate but found some positives and we move forward.” SOUNDERS FC MIDFIELDER DANNY LEYVA On the opportunity to start: “Obviously getting the opportunity to start was huge for me. I feel like I’ve been coming in on a lot of games I was supposed to and I feel like I’ve been doing well. So, to get the start today was a little bit of a reward and I was ready and up for the challenge and optimistic that I was going to play. Obviously frustrating result but I think the team played well a lot of the game. It was just unlucky I thought we had a lot of chances. Individually it was good to get the start and hopefully I can get the consistency going.”