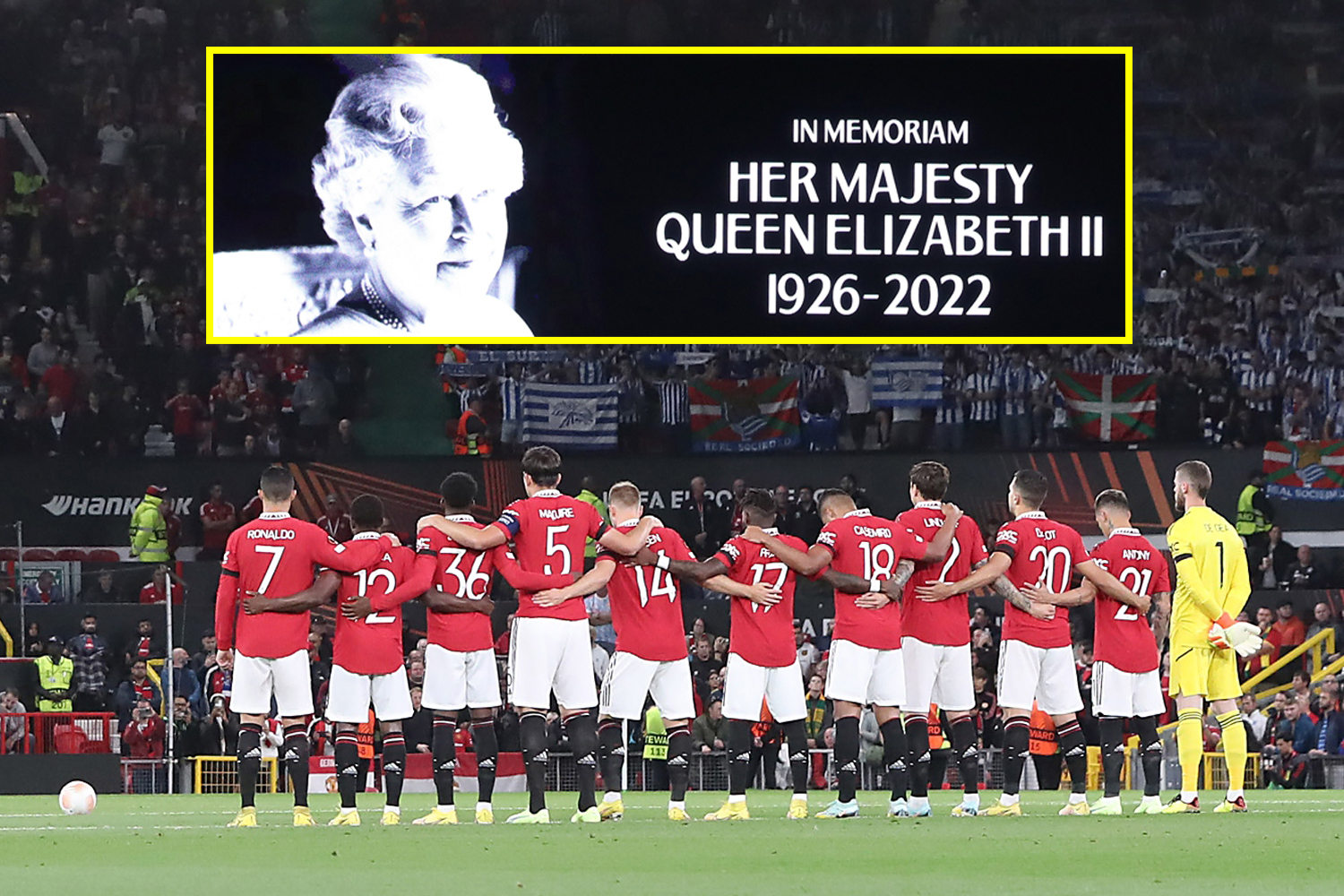 All this weekend’s football fixtures across the UK – from the Premier League to grassroots level – have been postponed following the death of the Queen. Her Majesty passed away on Thursday afternoon at Balmoral, surrounded by her close family, at the age of 96 after a 70-year reign. All Premier League and EFL fixtures have been postponed this week in a mark of respect to Queen Elizabeth IIgetty While Thursday’s European football matches continued as planned, with Manchester United, Arsenal and West Ham holding moments of silence and wearing black armbands, sporting events scheduled for Friday were called off as a mark of respect. Meetings between the Premier League, EFL, WSL, Football Association and other major sports bodies and government officials were then held on Friday morning to discuss whether events would go ahead this weekend. The Department for Digital, Culture, Media & Sport advised on postponing all events in the UK but ultimately left the decision to the main bodies. And it was announced on Friday morning that the Premier League and EFL had taken the decision to cancel all the games scheduled to take place across Saturday to Monday. The Women’s Super League, scheduled to kick off their new season on Saturday, have also scrapped all fixtures, as have the Scottish, Welsh and Irish football leagues. The National League has too postponed all games scheduled to take place across the weekend. Furthermore, the FA has postponed all football fixtures up to and including grassroots level. As a mark of respect to Her Majesty Queen Elizabeth II, this weekend’s Premier League match round will be postponed.— Premier League (@premierleague) September 9, 2022 The Premier League said in a statement: “At a meeting this morning, Premier League clubs paid tribute to Her Majesty Queen Elizabeth II. To honour her extraordinary life and contribution to the nation, and as a mark of respect, this weekend’s Premier League match round will be postponed, including Monday evening’s game.” The league’s chief executive Richard Masters said: “We and our clubs would like to pay tribute to Her Majesty’s long and unwavering service to our country. As our longest-serving monarch, she has been an inspiration and leaves behind an incredible legacy following a life of dedication. “This is a tremendously sad time for not just the nation but also for the millions of people around the world who admired her, and we join together with all those in mourning her passing.” The league said further updates regarding Premier League fixtures during the period of mourning will be provided in due course. Premier League games postponed this weekend Fulham v Chelsea Bournemouth v Brighton Leicester City v Aston Villa Liverpool v Wolverhampton Southampton v Brentford Manchester City v Tottenham Hotspur Arsenal v Everton West Ham United v Newcastle United Crystal Palace v Manchester United Leeds United v Nottingham Forest The EFL’s statement read: “Further to discussions on Friday morning it has been determined that all EFL fixtures from September 9 and 10 will be postponed as a mark of respect by the national sport to the passing of HRH Queen Elizabeth II. “This is aligned with the approach that the Premier League and the FA will take with their competitions this weekend. “Further information, in respect of how football, clubs and their supporters will commemorate Her Majesty’s reign will be confirmed at an appropriate point. “Details regarding rearranged games will be announced in due course.” The EFL and its clubs are also discussing the postponement of matches scheduled for Tuesday and Wednesday. No date has yet been fixed for the Queen’s funeral, with the major football bodies likely to make a decision on the following round of games once that is clear. In a statement, the FA said: “Her Majesty the Queen was a long-standing Patron of The Football Association and has left a lasting and indelible legacy on our national game. “As a mark of respect, following the passing of Her Majesty the Queen, English football has united to postpone all football fixtures between 9-11 September. “The FA can confirm that all football fixtures across the Barclays Women’s Super League, Barclays Women’s Championship, the Vitality Women’s FA Cup, and the Isuzu FA Trophy, will be postponed this weekend.” As a mark of respect to Her Majesty Queen Elizabeth II, English football has united to postpone all football fixtures this weekend. pic.twitter.com/k6bqNu6arf— The FA (@FA) September 9, 2022 Numerous other sporting events, including the England men’s cricket Test against South Africa, will go ahead as planned this weekend. Premiership Rugby fixtures scheduled for Friday were postponed, but matches took place on Saturday, and will again on and Sunday. Rugby league matches at all levels will also go ahead as planned this weekend, as will the Great North Run. The PGA Championship golf at Wentworth will resume too on Saturday, but will now be a 54-hole event.