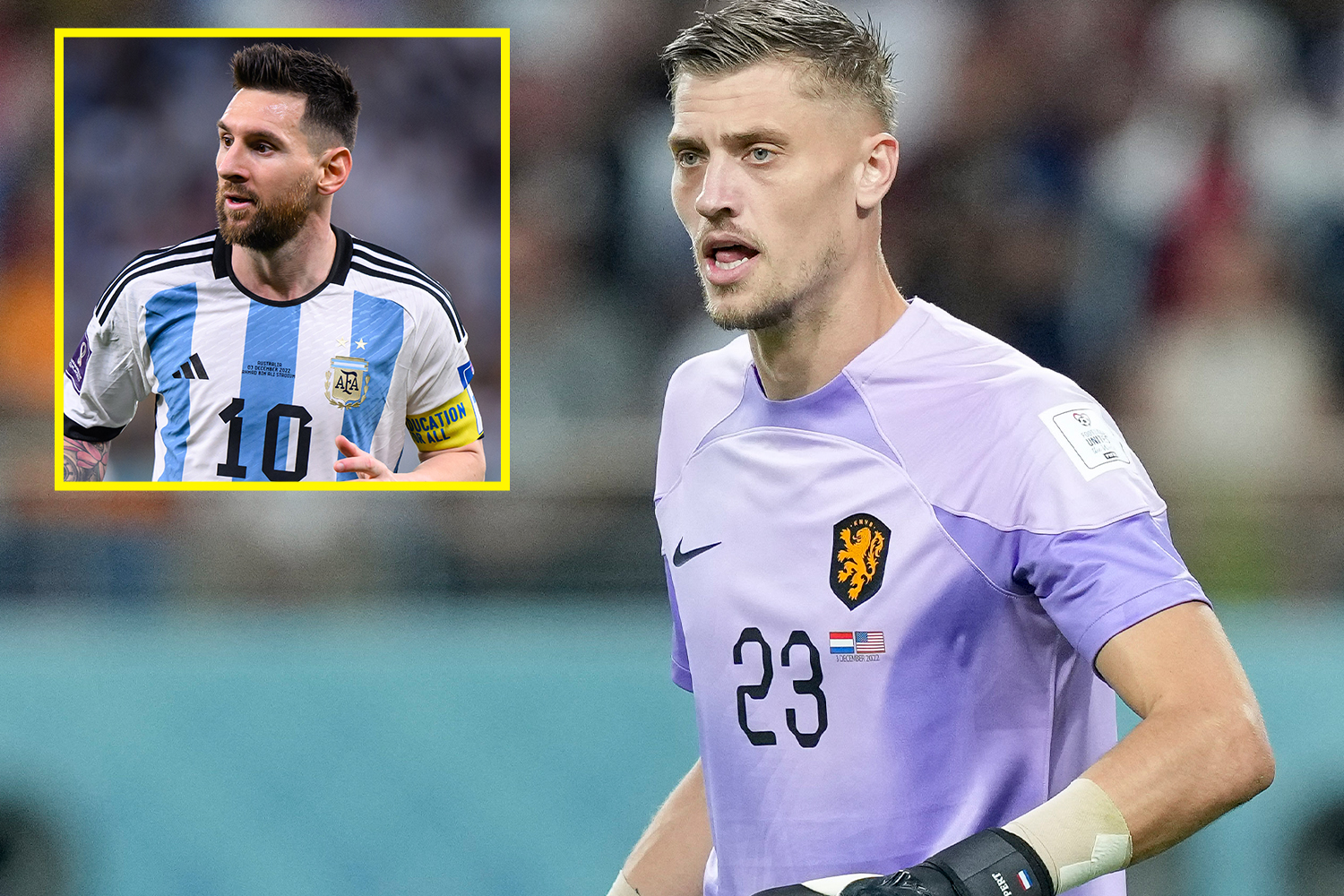 The Netherlands’ surprise first-choice goalkeeper, Andries Noppert, is backing himself to stop Lionel Messi, despite being hilariously honest about his World Cup status. Heerenveen’s Noppert was a surprise inclusion in Louis van Gaal’s Qatar 2022 squad, and the story became an even bigger shock when he started their opening match, his first ever for the national side. Van Gaal made the bold call to include Noppert, and it’s paying off so farGetty The keeper hasn’t looked out of place yetGetty The gigantic 6ft 8in shot stopper had only previously been called up for September Nations League games as a back-up option, but has now made his Oranje debut on football’s biggest stage. And it’s going rather well too, with the Dutch winning three and drawing one of their World Cup games, with 28-year-old Noppert keeping a clean sheet on his debut against Senegal. Only two keepers at the tournament have made more saves than his 15, and that may quickly change in the quarter-finals on Friday when he will line up against easily the best player he’s faced in his understated career, Lionel Messi. The Dutch take on Argentina in the quarter finals at the Lusail Stadium, live on talkSPORT, but Noppert is managing to keep things cool. “This is new to me. But it’s just fun,” he said. “I just have to be myself. I’m trying. The boys and staff accept that too. “That is the most important thing to me. I try to do it my own way. It’s a different world for me, but that won’t make me behave differently. Noppert gave an honest assessment to the pressAFP Most read in Football ron-call Ronaldo's sister says Portugal boss Santos 'humiliated' her benched brother joy Roy Keane takes shirt off in celebration after scoring winner against Micah Richards support Georgina Rodriguez sends message to Portugal boss after Cristiano Ronaldo dropped hang back Silva runs back onto pitch as Portugal celebrate opening goal against Switzerland destined Rice and Grealish 'were never going to play for Ireland' says former coach O'Neill ABSENT Ronaldo training decision surprises Portuguese press as starting XI recover “When you are a little boy you dream of being at a World Cup. When you see my career, you put that dream away. But I kept fighting for it. “There is only one national coach who could have brought me here and that is our national coach. I am proud to be here and I have to keep working hard. That is the most important thing.” Asked about playing in a 89,000 seater stadium, the biggest of his career, he said: “It is something to look forward to. You play for a lot of people. I certainly don’t feel fear. You can feel the tension when the match comes. But that’s normal. If you no longer have any tension in the competition, you better stop.” And on potentially facing a Messi penalty: “I’m always ready for that, and he can also miss, we saw it at the beginning of this tournament, so he’s the same like us – a human. For sure he’s good, but for sure I can catch the penalties.” Messi has already had one penalty saved and Noppert isn’t scaredGetty Noppert comes across as a cool and calm figure despite his stunning, rapid rise to the top of the game, and maybe that comes with his rather amusing humility. After knocking the USA out of the World Cup at the Round of 16 stage with a 3-1 win, the Netherlands squad took a trip on a yacht out into the Qatar waters, a normal experience for many of their players, but not Noppert. “I’m afraid I’ll never get on a boat like that again,” he said with a laugh. “In the sense of such a luxury thing. “That’s normally not my world at all, you have to stay close to yourself, don’t you?” Noppert has quickly acclimatisedGetty But with the laughs rolling, the AD reporter felt comfortable enough to ask Noppert about his status compared to other players, particularly financially. When it was put to him he may be the lowest paid player in the team, he replied: “Yes, 100 per cent. Feel free to ask people. No problem. Seems pretty logical to me.” Despite his self-effacing attitude, should Noppert manage to stop Messi on Friday and guide the Netherlands into the World Cup semi-finals, he may well have to quickly get used to luxury yachts and big salaries. talkSPORT World Cup 2022 Coverage talkSPORT is bringing you wall-to-wall coverage of the 2022 World Cup. We are broadcasting all 64 games in the tournament live, with over 600 hours of coverage across our network. You can tune in to talkSPORT and talkSPORT 2 via our free online streaming service at talkSPORT.com. talkSPORT is widely available across the UK via DAB digital radio and on 1089 or 1053 AM. You can also download the talkSPORT app, or ask your smart speaker to play talkSPORT.