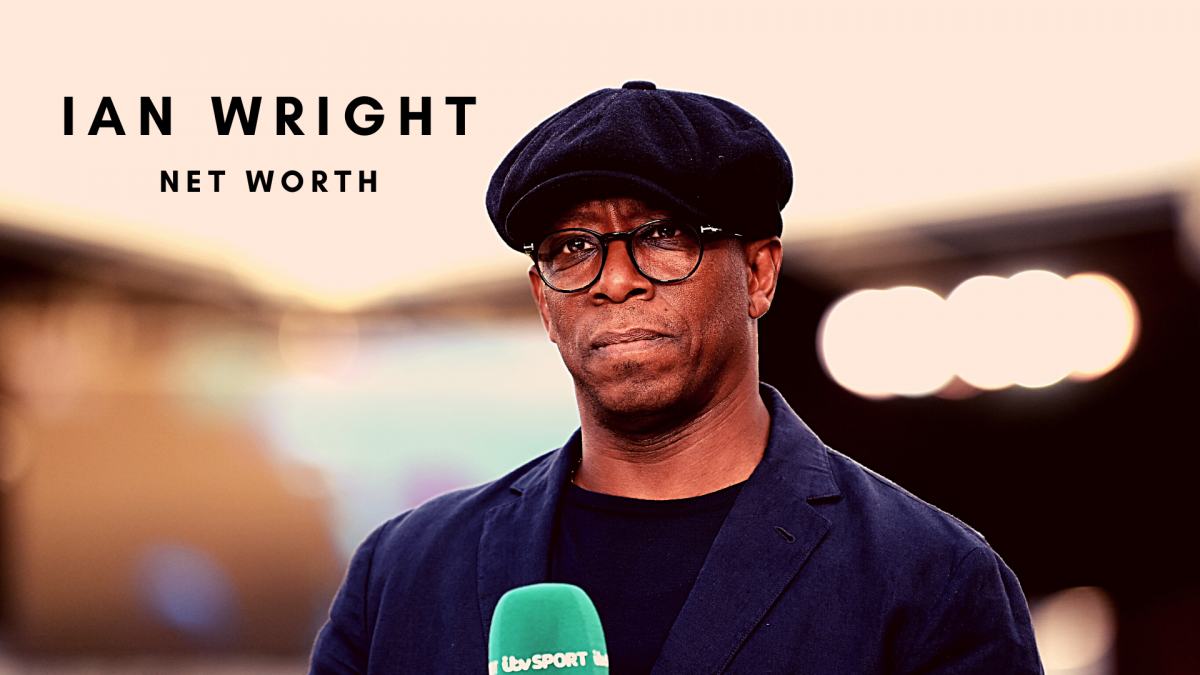 Ian Edward Wright, also known as Ian Wright is a former English International player who has played as a centre-forward for many Premier League clubs including Arsenal, Crystal Palace and West Ham and England national football team, and here we learn more about his nationality, net worth, wife, salary, family, and more. The English International spent almost 13 years with London teams Arsenal and Crystal Palace scoring 171 goals for the teams and has had great success there. Wright retired in 2000 and currently is an English TV and radio personality. He serves as a pundit for BBC Sport and ITV Sport currently. The forward has been known as an Arsenal legend and in this article, we will see more about his net worth, Wife, Salary, Former Clubs, job and more. Without any delay, let’s get started. Ian Wright (Arsenal) celebrates his goal. Arsenal v Newcastle United. 27/11/93. Credit: Colorsport. Ian Wright Facts and Wiki Birth PlaceWoolwich, EnglandFather’s NameMr HerbertMother’s NameMrs NestaStar SignScorpioNet Worth$20 millionAge58 yearsDate of Birth3 November 1963NationalityEnglishPositionStrikerClubsGreenwich, Crystal Palace, Arsenal, West Ham, Nottingham Forest, Celtic, BurnleyAchievements2X TOP SCORER1X ENGLISH CHAMPION1X EUROPAPOKAL DER POKALSIEGER SIEGER2X ENGLISH FA CUP WINNER1X ENGLISH LEAGUE CUP WINNERWifeNancy Hallam( m 2011 – present)SponsorshipNASocial MediaInstagram, Twitter Ian Wright net worth, salary, and more. Credits: @wrightyofficial on Instagram Ian Wright Net Worth and Salary Ian Wright is estimated to have a net worth of around $20 million. As he is a retired player, we don’t have much information about his salary details in his footballing career. He played at a time when players weren’t really paid the audacious wages as they do now but he still seems to have done very well in that regard. Currently, Ian Wright works as a pundit and reportedly earns £200,000 per year while his weekly wages as a football player would have been much lower than what he earns right now. Wright has made himself an iconic figure post his retirement as a player and hence, ensured a stable income for several years to come. Greenwich Borough sold Wright to Crystal Palace for a set of weights in 1991. He was then sold by the Eagles a few years later to Arsenal for 2.5million pounds. Ian Wright Club Career Ian Wright was signed by the semi-professional club Greenwich Borough and within a few matches there he was spotted by Crystal Palace scouts. After his impressive trials, he signed his first Professional contract at Crystal Palace on August 1985. Ian Wright moved to Arsenal in 1991 and finished his career there with an impressive hat trick on his league debut. He became the top scorer in the League that season, bagging 29 goals for the Gunners and was the club’s Top Scorer for 6 consecutive seasons. 23 September 1991 @Stuart_PhotoAFC @Arsenal pic.twitter.com/8QSU5I0mRN— Ian Wright (@IanWright0) September 23, 2022 In his later footballing time, he joined West Ham United in 1998 and was loaned to Nottingham Forest in 1999 and then joined Celtic after his loan. He then retired from football after his final season at Burnley in 2000. Ian Wright Family Ian Wright was born on the 3rd of November 1963 at Woolwich in England. he was the last son of three of the couple Herbert and Nesta. Ian Wright has Afro-American roots and has settled in England. He was brought up by his mom as there was no positive relationship between Ian and his father. Ian Wright has married twice. He adopted the son of his girlfriend Sharon Philips in 1991 and had another kid with her. They both grew up and became professional footballers in their earlier times. He also had another kid with another girlfriend. Ian Wright Wife – Nancy Hallam Ian Wright married his second wife Nancy Hallam in 2011. The couple then gave birth to 2 daughters later and it is believed that Ian Wright has a total of 8 Children. Nancy Hallam is a TV presenter by profession. Nancy Hallam is said to have a private status about her personal life. She prefers to concentrate more on her family and career rather than on social media. Ian Wright Sponsorship and Endorsements It is not known if Ian Wright had any sponsorship or endorsements as such. There is no information about anything on social media nor could we find any pictures of the player promoting any brand. Ian Wright is a famous presenter in football after retiring as a player. Credits: @wrightyofficial on Instagram Ian Wright Car and Tattoo Ian Wright seems to possess some powerful and expensive cars. In 2004, Ian Wright totalled his Ferrari 360 spider luckily no one was harmed and he escaped without a scratch on his body. Ian seems to have tattooed his left thigh but doesn’t prefer to show it much to the media. FAQs about Ian Wright What is Ian Wright’s net worth?Ian Wright’s net worth is 40 Million pounds.  Has Ian Wright won the Premier League?Ian Wright has won the Prem in 1998 with Arsenal.How tall is Ian Wright?He is 1.75 m tall. Nationality of Ian Wright?He is English. Has Ian Wright won a world cup?Ian Wright has never won the World Cup The post Ian Wright 2022 – Net Worth, Wife, Salary, Endorsements, Former Clubs, Current Job and more appeared first on Soccersouls.