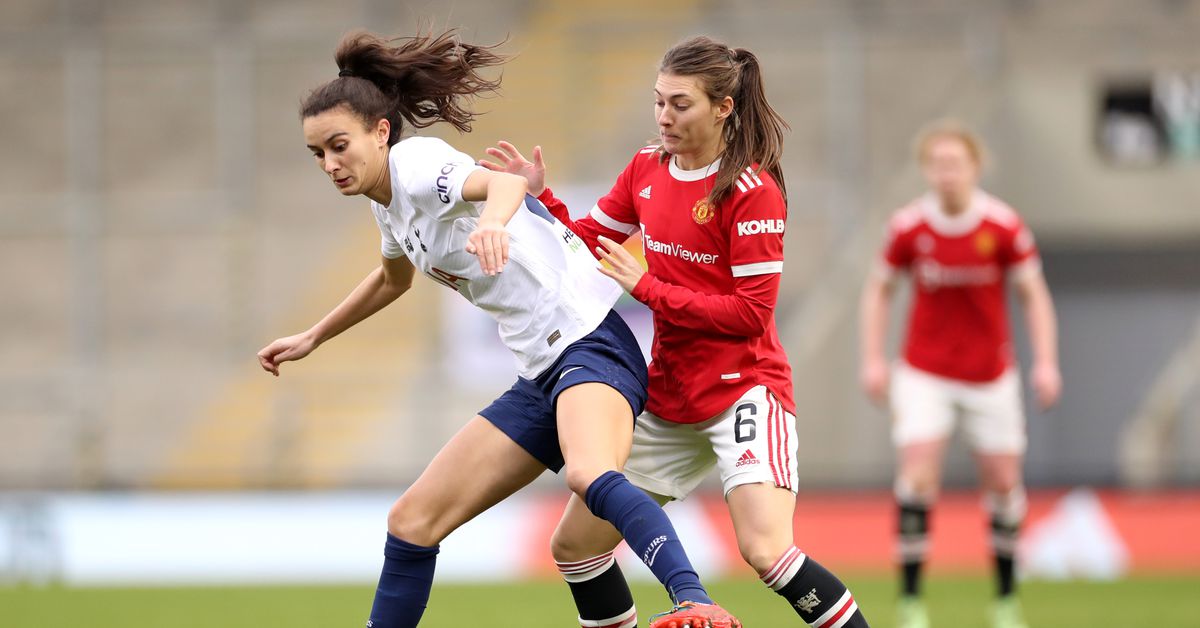 Photo by Lewis Storey/Getty Images Tottenham had a chance for a signature win but couldn’t muster anything going forward. Tottenham Hotspur Women had an excellent chance to pick up another signature win in the WSL today, playing away to rivals Manchester United at Leigh Sports Village. Unfortunately, Spurs were never really able to get anything going, let in two first half goals in five minutes to Vilda Boe Risa and Hayley Ladd. Leah Galton added a third in the 2nd half and United rolled to an easy 3-0 win in Manchester. Spurs started the match short-handed with international players like Kyah Simon, Cho So-hyun, and Tang Jiali away with their national teams. Spurs played a virtually identical starting 11 as they did against Leicester, with the only change being Tinja-Riikka Korpela coming in for Becky Spencer in goal. Due to internationals and unexplained absences, Spurs played this match with only five players on the substitute’s bench. Chioma Ubogagu was left out of the side entirely for unknown reasons. Your team to face @ManUtdWomen! pic.twitter.com/qzXOn3bxiW— Tottenham Hotspur Women (@SpursWomen) January 23, 2022 First Half The first half was a cagy affair, with United coming out in a back three formation and pressing Spurs high up the pitch. Tottenham had a lot of difficulty with United’s press, with the end result that they spent much of the opening half hour defending inside their own half. Any counterattacking opportunities they had were quickly snuffed out by United’s defense. Spurs defended stoutly themselves, limiting United to a couple of tame efforts on goal that were easily gathered by Korpela. Tottenham’s best chance of the half came after a half hour when Rachel Williams put a good cross that dribbled across the face of goal. Jessica Naz couldn’t get a boot to the effort at the near post to turn it in. United’s breakthrough came late in the first half. After a free kick led to a shot from Ella Toone that was deflected out for a corner, Katie Zelalem put the ensuing ball straight into the box and Vilde Boe Risa was there to punch it past Korpela to put the hosts up 1-0. At the back post!@VildeBoeRisa is there to tap home @katiezel's whipped in corner #BarclaysFAWSL @ManUtdWomen pic.twitter.com/nL9T72r6EC— Barclays FA Women's Super League (@BarclaysFAWSL) January 23, 2022 United made it two just five minutes later after Haley Ladd got a head on a good cross and punched it home, giving Spurs a mountain to climb to get back in the match. The first half ended 2-0. Two in quick succession!A brave diving header from @HayleyLadd doubles @ManUtdWomen's lead #BarclaysFAWSL pic.twitter.com/uMDHKwXC0t— Barclays FA Women's Super League (@BarclaysFAWSL) January 23, 2022 Second Half The second 45 began with no changes to either side, but Spurs needing to get something going to have a hope of getting back in the match. United had the first real chance but Leah Galton put a point blank shot off of a cross over the bar. There’s not much to say about the second half as it was remarkably similar to the first — Tottenham had difficulty hanging onto the ball and rarely mustered any attacking impetus in United’s half. Leah Galton picked up United’s third goal in the 62nd minute after a defensive miscue from Ashleigh Neville who failed to clear a cross into the box. Galton was wide open at the back post to tap the ball in and putting the match beyond all doubt. In on the goals! @leah_galton21 gets her name on the scoresheet for @ManUtdWomen #BarclaysFAWSL pic.twitter.com/qrGdYjE2px— Barclays FA Women's Super League (@BarclaysFAWSL) January 23, 2022 Angela Addison came on just after the third goal for Josie Green, ostensibly to give Spurs a little more punch in attack. Ayane had one of Tottenham’s best chances of the 2nd half on a counter when played through on goal but opted to take a touch and her deflected shot was saved by Earps. Rachel Williams nearly pulled another back for Spurs ten minutes from time after Neville put a gorgeous cross to the back post, but somehow Rachel’s thumping header went wide of the post. United seemed to take their foot off the gas in the closing minutes, giving Spurs a few more bites at the cherry, but ultimately they weren’t able to pick up a consolation goal. Spurs were able to bring on Isabella Lane, a Spurs academy product, for her WSL debut in the closing minutes. The final whistle blew in a 3-0 defeat. Reactions I’m not sure how much there is to take from this match. Spurs were short handed, yes, but they also put just about their best possible team out there and got their butts handed to them. United’s a good team. It happens. But it’s frustrating. Spurs never looked in this. They appeared discombobulated by United’s press in the early stages and couldn’t muster anything going forward. The match opened up after the first goal and any defensive efficacy they had kind of melted away. With only five players on the bench, there wasn’t really anywhere to turn to generate a spark. Addison was the only real option and she came on too late to really make a difference. Spurs are now three behind United and fourth in the table pending other results. They could drop down to sixth if City win their match in hand. Next match is the FA Women’s Cup, home to Leicester next Sunday.

Norwich have an incentive to help Arsenal qualify for Champions League