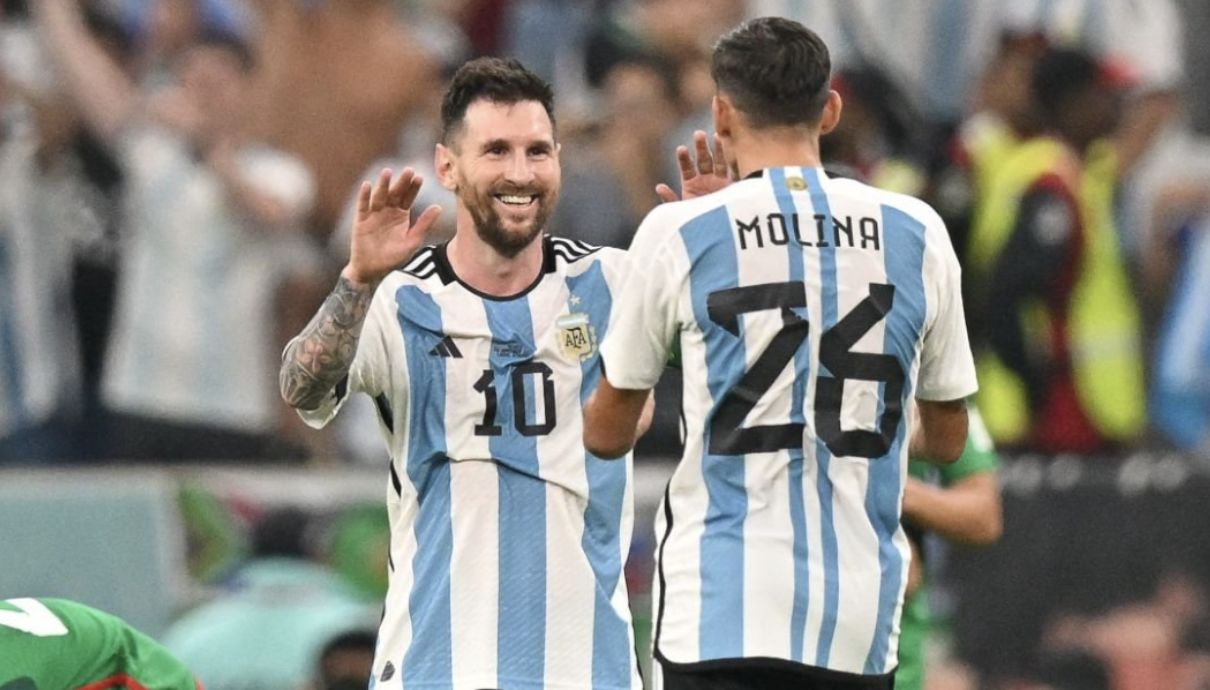 The pressure was on Lionel Messi and Argentina to rebound from Tuesday’s shocking loss to Saudi Arabia and the Conmebol representatives did just that against Mexico on Saturday. Messi scored the go-ahead goal for Argentina before assisting on Enzo Fernandez’s insurance strike in a 2-0 Group C victory over El Tri. Argentina moved to second place in Group C heading into a final group stage showdown with Poland. Both teams struggled in front of goal for the opening 60 minutes of the match, but Messi would call his own number to help deliver the go-ahead goal. Messi picked up a pass from Angel Di Maria from 25 yards out before hitting a low, left-footed drive into the bottom-right corner past Guillermo Ochoa. MESSI Argentina takes the lead vs Mexico! pic.twitter.com/iqDUyzzxlx— FOX Soccer (@FOXSoccer) November 26, 2022 It was Messi’s second goal of the tournament. With Mexico pushing for a tying goal, it was Argentina who celebrated three points as Fernandez delivered the insurance strike. Fernandez received a pass from Messi following a short corner routing before striking into the top corner of Ochoa’s net. 21-year-old Enzo Fernández comes through for Argentina on the world's biggest stage pic.twitter.com/TeLdEVacdI— FOX Soccer (@FOXSoccer) November 26, 2022 Emi Martinez made one save to earn his first World Cup clean sheet as Argentina moved one step closer to advancing into the Round of 16. Mexico sits bottom of the group needing a victory against Saudi Arabia to have any chance of staying in Qatar. Argentina faces off with Poland, sitting one point back of Robert Lewandowski and his Polish teammates. Here is a closer look at all of Saturday’s World Cup action: France 2, Denmark 1 (Kylian Mbappe 61′, 86′) – (Andreas Christensen 68′) France clinched its spot into the Round of 16 on Saturday with Kylian Mbappe playing the hero for Didier Deschamps’ squad against Denmark. Mbappe scored twice including the winning goal in a 2-1 victory over the Danes, sealing France the top spot in Group D. Hugo Lloris made one save for France. Kasper Schmeichel kept the sides level in the first half after repelling Adrien Rabiot’s header in the 22nd minute. Mbappe had a great chance to break the deadlock before halftime but skied his effort in the box over the crossbar. The PSG star did not miss though in the 61st minute, using Theo Hernandez’s decoy on the left wing to send a tricky shot past Schmeichel. However, Denmark needed only seven minutes to tie things up as Andreas Christensen finished off Joachim Andersen’s pass in the box with a powerful header. Andreas Christensen header Another look at the equalizer for Denmark pic.twitter.com/rOHUJYk3T0— FOX Soccer (@FOXSoccer) November 26, 2022 Mbappe would play the hero for France though in the 86th minute as the 21-year-old finished Antoine Griezmann’s cross for a 2-1 victory. MBAPPE MAGIC France takes the lead in the 86th minute pic.twitter.com/vOulTGkSHl— FOX Soccer (@FOXSoccer) November 26, 2022 Denmark sits in third place and will face Australia on Wednesday knowing a victory would clinch them a Round of 16 berth. France takes on last place Tunisia with top spot already guaranteed. Poland 2, Saudi Arabia 0 (Piotr Zieliński 39′, Robert Lewandowski 82′) Poland captured its first victory at the 2022 FIFA World Cup on Saturday with Robert Lewandowski celebrating his first goal in the tournament. Piotr Zieliński opened the scoring six minutes before halftime before Lewandowski iced the victory in the 82nd minute. Wojciech Szczesny made five saves to preserve the clean sheet for Poland. Both teams had golden opportunity to grab an early lead, but were unable to score. Szczesny made a fine save in the 14th minute to deny Saudi Arabia a shocking lead before Krystian Bielik’s header in the 26th minute was cleared off the goal-line. Lewandowski helped set up the opening goal for Poland, picking out Zielinski who confidently drilled a shot into the back of the net. THERE IT IS FOR POLAND Piotr Zieliński finds the back of the net pic.twitter.com/F1mlATVuhn— FOX Soccer (@FOXSoccer) November 26, 2022 Szczesny was called into action before halftime as the Juventus goalkeeper denied Salem Al-Dawsari from the penalty spot. Bielik was whistled for a foul in the box, but Al-Dawsari nor Mohammed Al-Breik’s follow-up chance. This double save was CLUTCH Wojciech Szczęsny wasn't going to let anything past him pic.twitter.com/TdZOAnfzQd— FOX Soccer (@FOXSoccer) November 26, 2022 Saudi Arabia did its best to earn an equalizing goal in the second half but ended up conceding a second tally which ultimately handed Poland the victory. Abdulelah Al-Malki failed to get the ball out from under his feet, allowing Lewandowski the chance to steal possession and capitalizing with an insurance goal. LEWANDOWSKI SCORES HIS FIRST EVER FIFA WORLD CUP GOAL pic.twitter.com/iQbQTDH3Cf— FOX Soccer (@FOXSoccer) November 26, 2022 Poland will face Argentina on Wednesday while Saudi Arabia takes on Mexico. Tunisia 0, Australia 1 (Mitchell Duke 23′) Australia stayed alive in Group D play on Saturday with a 1-0 victory over Tunisia. Mitchell Duke’s first-half headed goal paired with Mathew Ryan’s four-save shutout kept the Socceroos alive heading into their final group stage match on Wednesday. Duke delivered the lone goal of the match in the 23rd minute, benefitting from a deflection in the box to score. Craig Goodwin’s cross from the left wing hung around in the box and Duke made no mistake to punish the Tunisian defense. AUSTRALIA BREAKS THROUGH Mitch Duke puts the Socceroos on top! pic.twitter.com/UgDzjNY66l— FOX Soccer (@FOXSoccer) November 26, 2022 Mohamed Dräger came close to tying things up for Tunisia before halftime, but Harry Souttar’s key block kept Australia in front 1-0. Youssef Msakni was denied twice in quick succession in the 72nd minute, forcing Ryan to punch away his first effort before the veteran shot-stopper caught the follow-up chance. Australia would hang on for its first victory and shutout of the tournament, setting up a Wednesday showdown with Denmark. Tunisia faces France on the same day.