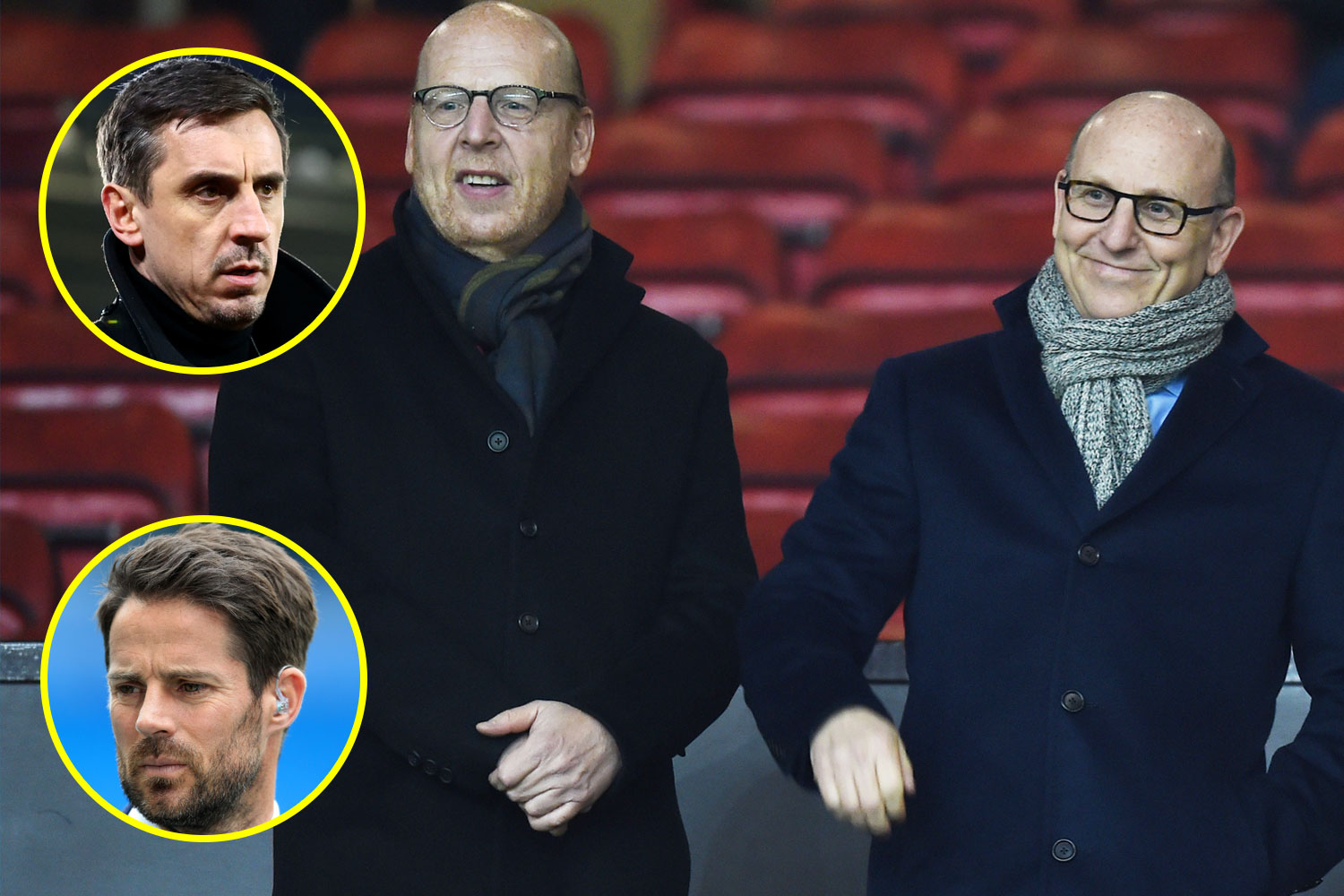 Manchester United ‘have to sit back’ and wait for the good times to return, ex-Liverpool star Jamie Redknapp has told talkSPORT. Redknapp entered into a heated debate with former England teammate Neville about the failings of the club after the Red Devils lost 4-0 to Brentford. Neville believes the Glazer family ownership are responsible for the downfall of Man United since the departure of Sir Alex FergusonGetty But Redknapp didn’t totally agree with Neville, saying the team needed to take some blame toogetty “Just look at me when I’m talking to you,” the ex-Liverpool star said to Neville as the Man United legend stared off into the distance in the row, still reeling from his side’s showing. Neville had taken aim at the Glazer Family but Redknapp was keen to point out the blame didn’t just lay with the owners, and took umbrage at claims Tottenham chairman Daniel Levy was a good example of an excellent owner. And it wasn’t long before talkSPORT co-host and former Aston Villa striker Gabby Agbonlahor cracked a joke about Redknapp’s viral disagreement with Neville. “Jamie, you know when you’re on [A League of Their Own], are they looking you in the eye?” Agbonlahor joked. Redknapp responded in good jest, saying: “It’s just basic manners, right, Gabby! “Gary Neville’s actually on the series you know, but we filmed it a couple of weeks ago so it’s a shame it hadn’t been on then, I think they’d have made something of that!” Most read in Football transfers Man United target Felix and Pulisic, Ronaldo told to come clean, Alli to Besiktas in play Jordan likes Coventry's 'potential' as he considers bid and hits back at Agbonlahor GER GREAT Alli urged to avoid dropping down 'two or three levels' and join Rangers talent Rangers star 'should be in Premier League', says O'Hara, who he'd have at Tottenham NOT HAPPY 'You'll know the truth' - Ronaldo addresses Man United future in cryptic comment HOPE Man United 'will be sold in the next 24 months' and 'there are people circling' Manchester United’s two losses since the start of the new season has sparked debate over what’s gone wrong at the clubGetty And when asked by host Laura Woods whether it’s the fault of Manchester United’s owners that they haven’t recruited well enough – which many of the club’s fans believe – Redknapp expanded on his point from the match in west London. “It’s not so much the lack of business,” he said. “They’ve tried to do business but it’s just become more difficult. They’re not the greatest owners in the world, we’ll all accept that. “But they’ve also spent money in that period and bought players that haven’t quite worked out. Even the players they’ve bought in this window, [Lisandro] Martinez, brilliant player in the Dutch league, he looked fantastic. Redknapp believes Ten Hag’s first real big signing, Martinez, sums up why the Glazers can’t take the full blameGetty “But just that lack of height makes for a bit of difference when you bring them into the Premier League so the manager [Erik ten Hag] has to accept responsibility for that. It’s only two games in so we have to be careful that we don’t judge too far down the line.” After reaffirming his point that new manager Erik ten Hag and his players need to take some responsibility for the club’s failures so far this season, Redknapp explained that Man United face a struggle to recruit as they once did. But he also stated that even Neville knows that in time the club will be back to winning trophies like it used to do – despite his anger towards the Glazers’ running of the club. Redknapp continued: “If you’re going to Man United right now, why would you want to go and join the chaos when you can go to a club that’s established Champions League and could maybe win the league? Man United have so far failed to attract players like Barcelona’s Frenkie de Jonggetty “Man United isn’t that club right now, and it’s going to take time to turn that around. It was the same with Liverpool for many years, they struggled, they dominated then other teams come into it, that’s how football goes sometimes. “Man United have just got to accept they’ll have a bit of pain and they will come back, absolutely. “I think [Neville] would agree, they will have their time again, but right now you just have to sit back and think, ‘okay, this isn’t our time right now and we’ve just go to build again slowly’.” Offer Of The Day BETFAIR NEW CUSTOMERS: Bet £10 on 13.50 York on Wednesday, Get £60 in Free Bets* – CLAIM HERE PADDY POWER ALL CUSTOMERS: Bet £5 via the talkSPORT EDGE app with Paddy Power and get a £5 free bet – available to all customers* – CLAIM HERE Paddy Power All Customers: Place a £5 Sportsbook Bet through the talkSPORT EDGE app between the 1st and 31st August. Get a £5 free bet on the next Monday after your qualifying bet. T&C’s apply. 18+ Begambleaware.org Betfair: 18+. New customer offer. Bet £10 on SBK on the 13:50 York, Wednesday, 17th August. Get a £10 free bet for each of the remaining races on the card (£60 in total). Only deposits with Cards apply (Apple Pay deposits excluded). T&C apply. begambleaware.org SEE ALL FREE BET OFFERS FOR NEW AND EXISTING CUSTOMERS HERE